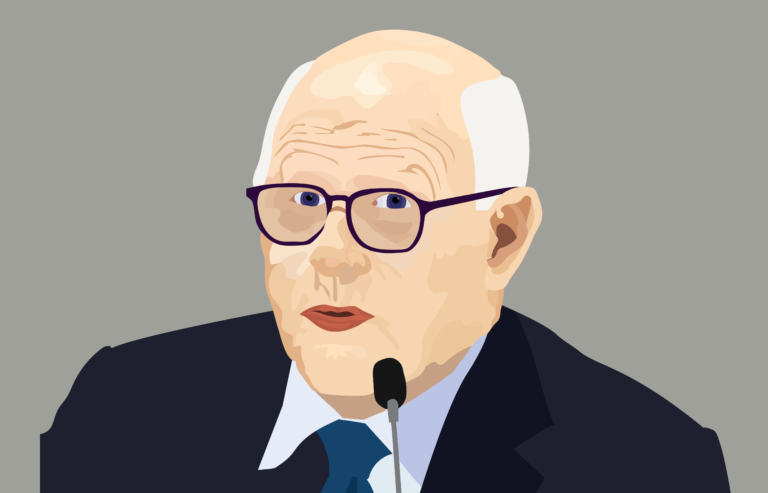 Steve Soboroff, 70, is the president of the Los Angeles Police Commission, the body charged with policing the police. The five-member board hires and fires the chief, sets policy and decides when one of the city’s 10,000 officers has stepped out of line.

Soboroff was born in Chicago but moved to LA in high school. He has been a successful real-estate developer and civic leader and an unsuccessful candidate for mayor. We sat down with him to talk about how algorithmic policing may help or hurt community relations with police, the virtue of body cameras and the case for buying a cop a cup of coffee. The interview has been edited for length and clarity.

Crosstown: We know that crime is down in LA, but that officer-involved shootings and relationships between police and communities of color are as tense as ever. In your six years on the commission, what have you noticed about the community’s relationship with the police department?

Steve Soboroff: We did a survey where we asked, “How many times do you think a cop shoots his gun?” We asked it across Los Angeles, across ZIP codes, different financial background, different racial background and different religious backgrounds. The survey came back, and the average person thought that a cop shoots their gun once every three years. We have 10,000 cops. So the perception of Los Angeles is we shoot our guns more than 3,000 times a year. Last year we shot 38 times. We don’t shoot guns. We are trained to de-escalate.

We are in a business where the average person thinks that we do something 400 times more than we actually do.

CT: What does that tell you?

SS: That’s bad. Whose fault is it? Partially ours. How do we deal with that? We double down on converting police stations to community centers, on having every single cop also be a coach, or the guys are out of their cars walking. That’s what we have to do, because if we don’t, we’re going to get out of balance in the makeup of our department.

CT: What do you mean by out of balance?

SS: When any police department is 85% white in a community that is, say, 15% white, that’s where things get out of whack. Our problem is we can’t recruit African Americans now because we’re stigmatized. So what are we doing about that? We have required that they create a completely new recruitment plan.

CT: How is it different?

SS: What we used to do was try to get people to come to us. Now we’re going after people. We’re starting in schools. We’re going to start signing bonuses. I’m going to make an estimate for you, which is not factual, but, it’s my perception: When I started six years ago, 70% of the cops told me they would recruit a friend, that they would tell their kid, “Be an LAPD cop. It’s awesome.” That number now is probably 20%. That’s a huge problem if a cop tells his own kid: “Don’t do what I’m doing. I’m underappreciated. I’m not trusted. I do everything I possibly can and I’m not respected.”

CT: We want to get into these issues of trust. But we also want to better understand how you see your role. When you refer to the police, you say “we.” Do you see yourself more as an oversight body for the department, or as part of the department?

SS: We set policy. Yes, we adjudicate, and we’re tough. But are we pro-mission of the LAPD? Yeah. If somebody asked, “Are you neutral?” There’s no way. I lean towards cops. I see what they go through. I see what they’re up against.

CT: What’s the one policy issue you can point to where you’ve made tangible progress?

SS: That happens to be easy for me: body cameras. Cameras had shown remarkable results in very small communities, like Rialto: a decrease in officer-involved use of force, decreases in complaints against officers, decreases in escalation.

When people see that they’re being filmed, it’s a de-escalator. It’s cold water. It’s like having your mom come up to you and say, “Stop. ” When people are in traffic stops, they wise-off all the time, especially the privileged people. But when they see they’re being taped? That just ends it.

I wanted to put a big city police department into body cameras, all out.

But nobody has the money. So, I went to the private sector and said, “Hey, while you’re sitting around at dinner, while you’re talking about your Picasso and your cars that cost as much as a spaceship, for a million and a half dollars, I think we can jolt law enforcement in America. Will you participate?” It was easy.

I thought that we could do a pilot project where we would get information that would be so powerful that I could go to the [city] council and say, “We are saving so much money with fewer lawsuits with just 1,000 cops. Give us $10 million over 10 years to outfit the entire department and watch what happens. Garcetti did it immediately. He didn’t even wait for the results.

CT: Have the results been what you had hoped?

SS: It’s substantial. I don’t have the exact numbers, but even if we reduce a few lawsuits against the department it pays for itself.

CT: What’s the policy for releasing the body cam footage when there is an incident?

SS: We’ve been releasing more. In the use of force, it is released pretty much right away, in around 48 hours.

And that was a policy change. Had I brought that up at the beginning, I would not have gotten the body cams approved by the [police] union. But the more transparency the better.

CT: Anyone who has been to a weekly commission meeting knows that there are vocal groups who express their distrust of the LAPD and, by association, you. What do you make of those sentiments?

SS: Don’t I have an obligation to try and look through that to the issues of the underserved and inequities and at-risk people and how to serve them? I do. It just isn’t the job of the police department. It’s the job of service providers. It’s the job of philanthropy. Our problem is that the privileged don’t have empathy for the underserved. That’s the problem in Los Angeles. And if they did, we’d have so many off ramps to this freeway-to-jail people are on.

CT: Do you think the LAPD is making strides in building trust?

SS: It’s just like a bank account. We’re putting pennies in the bank, pennies. Then, every time there’s an interpretation or misinterpretation or something that goes off, it’s a million-dollar withdrawal. That’s the hard part. Still, even though people don’t trust us they call us, because who else you’re going to call?

CT: Last week, Chief Michel Moore announced he was further curtailing some of the elements of the predictive policing model called LASER (Los Angeles Strategic Extraction and Restoration) that is used to target people who are considered to be more likely to commit violent crimes. He said he also wants to re-evaluate whether another crime prediction software, PredPol, which uses data to predict where property crimes will occur, is actually effective. The criticism is that these programs can become a self-fulfilling prophecy. People who live in high-crime communities are more likely to wind up on the LASER list, for example. Do you think LAPD oversteps when it uses these tools?

SS: These programs may wind up suspended, but I doubt it. They are modifying them. What the programs are not supposed to do is create a whole bunch of [police] stops that are unnecessary. But they are incredibly important in community policing and precision of policing.

The chief said, I’m not going to leave it where it is. I’m not going to disband it. I want to make them more efficient and here are my steps. I think that’s exactly the step he is taking and that I will vote for. It is a step. These steps are gradual and need to be reviewed all the time. They are written in pencil, not in stone.

CT: If you were just a regular citizen, would you trust LAPD’s data reporting and what they tell the public about their process related to criminal profiling?

Do we make mistakes? Yes, and with our stuff, there are simply all kinds of inputs. It’s much harder.

CT: What do you think people in Los Angeles need to understand about the police?

SS: That they’re human. When you see a cop and you’re at Subway, how about buying them a sandwich? Or a cup of coffee? How about talking to him as a person? How about thanking them for their service? How about taking one second to see that they are, you know human?