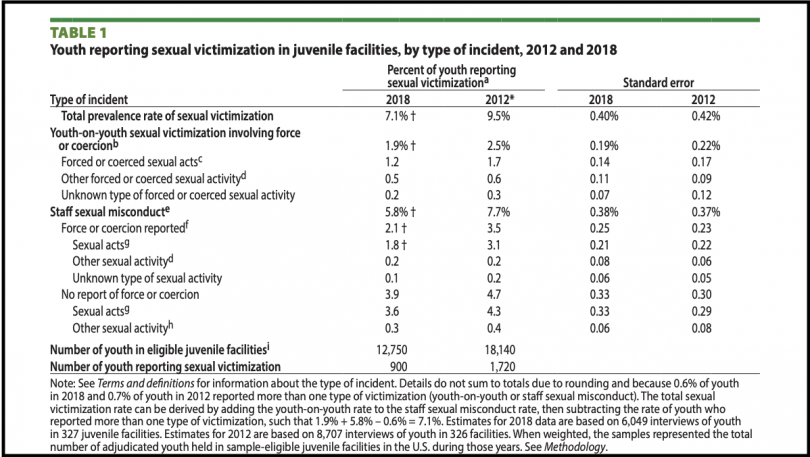 In 2012, 9.5 percent of youth — nearly one out of every 10 kids — in juvenile corrections facilities who responded anonymously to a survey conducted by the U.S. Bureau of Justice Statistics said that they were sexually victimized by staff or other kids during the previous 12 months. That number dropped to 7.1 percent of incarcerated youth in 2018.

This particular BJS survey series is required by the federal Prison Rape Elimination Act (PREA) of 2003. As part of PREA’s goal of eradicating rape and sexual victimization in carceral settings, the feds are required to collect data on alleged sexual assaults behind bars.

BJS’s 2018 data, presented in a new report by BJS statistician Erica L. Smith and former BJS statistician Jessica Stroop, comes from a survey of 6,049 youth in 327 private, county, and state-run juvenile facilities nationwide, including at least one lockup in every state. The 2012 survey recorded responses from 8,707 incarcerated kids in 326 facilities.

To break the data down further, the number of incarcerated youth who said staff sexually victimized them declined from 7.7% in 2012 to 5.8% in 2018. Of those who reported staff-on-youth sexual misconduct in 2018, 36 percent said the sexual acts involved force or coercion.

From 2012 to 2018 the number of kids and young adults reporting forced or coerced sexual assaults from another youth dropped from 2.5 percent to 1.9 percent.

Florida was home to the facility with the highest percentage of youth reporting sexual victimization. At the Liberty Juvenile Unit for Specialized Treatment, over 26 percent of surveyed kids said they had been victimized. Two other FL lockups had victimization rates above 20 percent.

These youth detention facilities were among 12 lockups the statisticians considered to have a “high rate of sexual victimization” — at least 1.25 times the national average. (To qualify for the facility-level comparison, a lockup had to have at least 15 youth who responded to the survey.)