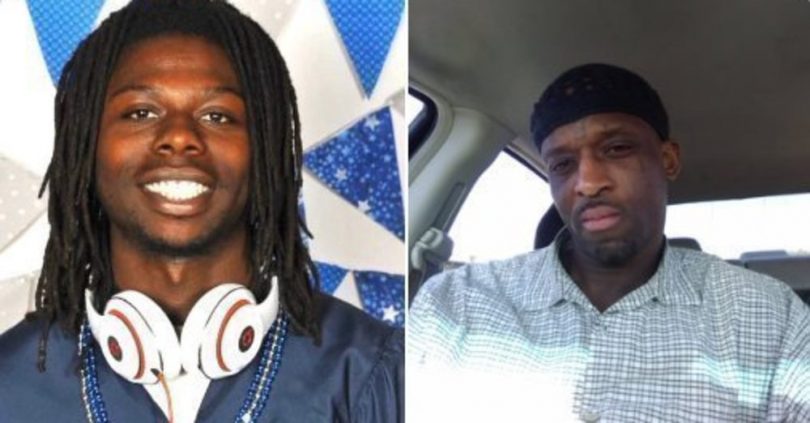 On Monday afternoon Los Angeles County Sheriff Alex Villanueva held a virtual press conference to announce that his department was initiating a “thorough” investigation of the death of Robert Fuller,” the 24-year-old Black man who was found hanging from a tree at about 3:40 a.m. on Wednesday, June 10, in a park across the street from the Palmdale, CA, city hall.

In the course of his press even, Sheriff Villanueva, along with Captain Kent Wegener from LASD Homicide, and Chief Medical Examiner Dr. Jonathan Lucas, performed an energetic rewind of department officials’ original pronouncement that the young man’s hanging death a suicide, and that there was no indication of foul play. 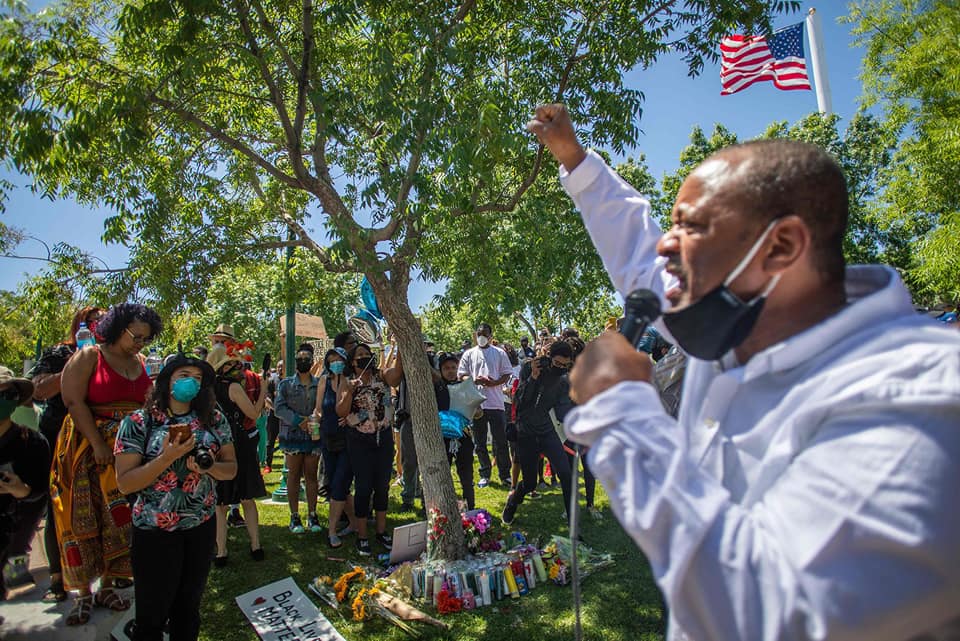 In the days that followed Fuller’s death, family and friends became less and less satisfied with the LASD’s conclusion.

But, it wasn’t just the family who felt that way, said activist Najee Ali, who has met with the Fuller family and others in the Palmdale area, and has helped organize the ongoing live-cast rallies for Fuller, which have continued to get larger.

“Family members can’t help but be biased,” Ali told WitnessLA. “They’ve lost a loved one.” But he found it persuasive to hear from others who knew Fuller, he said, such as a teacher who told news reporters that she knew him from high school and, like his family, found the idea of suicide out of character.

Najee said he also has his own contacts in the area, such as neighbors and others, several of whom called him to say that they knew Fuller, that he was a “great kid,” with no obvious signs of trouble.

One store owner Najee Ali knew said he saw Fuller “regularly” and just did not buy the suicide.

“This kid was a gamer. He was a nerd.” He graduated from high school and went to college. And while these details prove nothing, the consensus, according to Najee Ali, was that Fuller didn’t seem at all troubled or depressive.

Fuller’s best friend Tommie Anderson told Fox 11 News that there seemed to be the desire to “put it on mental issues, it was depression. No,” she said. “It was a young black man who was hung in a tree.”

On Saturday, June 13, things began to heat up further on the Fuller case, when Los Angeles County Supervisor Kathryn Barger wrote to California’s Attorney General Xavier Beccera and asked him to “conduct an independent investigation into the death of Mr. Robert Fuller who was discovered hanging from a tree in the City of Palmdale.”

She was later joined by state Sen. Scott Wilk of Santa Clarita and Assemblyman Tom Lackey of Palmdale.

Then, by early Sunday night, Sheriff Villanueva had announced Monday’s 11 a.m. press event. where he reassured everyone that the department would “leave no stone unturned,” in the investigation of Fuller’s “apparent suicide.”

The sheriff also said he’d spoken to Attorney General Becerra, who would be monitoring the LASD’s investigation, not running it.  Although a statement from the AG’s office suggested that his team may also engage in its own probe.

In addition, the sheriff said he spoke to a Special Agent in charge at the local FBI office, and that their civil rights division would also be monitoring the department’s investigation of Fuller’s death.

LASD homicide’s Wegener said detectives would do forensics “on the rope involved,” and on the knots that were used, and other elements of that nature. They would talk to the witness who found him, and to those who’d seen Fuller in the past few days. Plus they were hoping to find some sort of video from the surrounding area that might have caught what happened.

Dr. Lucas said the coroner’s office has completed Fuller’s autopsy but is awaiting toxicology results, Lucas said. Investigators are also looking at Fuller’s medical history and planning to interview his “caseworker,” although no one explained why such a caseworker existed in the young man’s life.

Matters have become far more painful with the news that Robert Fuller was the second Southern California Black man in less than two weeks to be found dead and hanging from a tree in what local officials initially labeled a suicide, until friends and family members refused to accept that conclusion without a very thorough investigation. 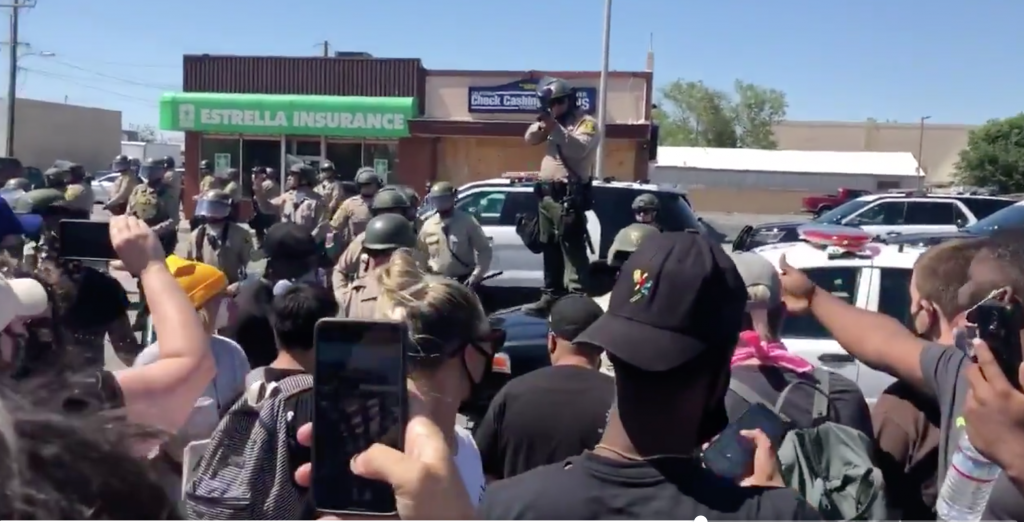 The death of Malcolm Harsch was discovered at around 7 a.m., on May 31, 2020, after a local resident called 911 and the Victorville City Fire Department was dispatched to an area that was near a homeless encampment and about 100 yards from the Victorville City Library.

Others at the camp reportedly found Harsch hanging from a tree, got him down, and attempted to revive him,  according to investigators from the San Bernardino Sheriff’s Department.

“There were no indications at the scene that suggested foul play,” sheriff’s spokeswoman Jodi Miller told reporters from the local Victor Valley News when the news first broke. “However, the cause and manner of death are still pending.”

As with Fuller, Harsch’s family members were confused and dumbfounded by the news.

“As most of us are in Ohio, we weren’t able to physically go to the location where he was found dead,” said Malcolm Harsch’s family, which released a collective statement to the press and public. “We did speak to a few people who were around at the time of the discovery. We were told that his 6 foot 3 inches long body wasn’t even dangling from the tree. There was blood on his shirt, but there didn’t appear to be any physical implications at the scene to suggest that there was a struggle or any visible open wounds at that time.

“The explanation of suicide does not seem plausible,” the family wrote. “There are many ways to die but considering the current racial tension, a black man hanging himself from a tree definitely doesn’t sit well with us right now.”

Harsch’s body reportedly remained at the San Bernardino County Coroner for 12 days before an autopsy was finally performed.

Now, however, the FBI and the California Attorney General’s office are working with investigators in Los Angeles County and in San Bernardino County to determine if there’s a link between Harsch’s death in Victorville and Robert Fuller’s death in Palmdale, according to SBSD spokesperson Miller.

Najee Ali and other community leaders have scheduled a rally in Victorville on Tuesday afternoon to make sure a strong focus stays on Malcolm Harsch’s death along with Robert Fuller’s in order “to make sure the truth is found.”

What bother’s me the most, Ali said, is that in both cases the law enforcement agency involved “assumed it was suicide before they had begun an investigation.”

The history of terror lynchings

It is, of course, possible that one or both of the two men killed themselves.

Yet, given the timing of the deaths of Robert Fuller and Malcolm Harsch, and given Black Americans’ history of being murdered via lynching, whatever the investigations produce, it cannot help but be devastating.

The Equal Justice Initiative — a non-profit organization launched by civil rights attorney and author of the stellar and best selling book, Just Mercy — provides legal representation to people who have been illegally convicted, unfairly sentenced, or abused in state jails and prisons.

In 2010, EJI also began documenting the more than 4400 of what they describe as “racial terror lynchings” in the United States during the period between Reconstruction and World War II.

EJI uses the term terror lynching to differentiate it from any other kind of lynching that took place in the U.S.

“The lynching of African Americans was terrorism,” according to Stevenson, “a widely supported campaign to enforce racial subordination and segregation.”

This research ultimately produced Lynching in America: Confronting the Legacy of Racial Terror

The 2015 report, along with a national Memorial for Peace and Justice, constructed on a six-acre site atop a rise overlooking Montgomery,  according to Stevenson and EGI, is intended to attempt to start a conversation to confront the injustice, inequality, anguish, and suffering that racial terror and violence exemplified by lynchings created.

“Mass incarceration, excessive penal punishment, disproportionate sentencing of racial minorities, and police abuse of people of color, ” writes Stevenson, “reveal problems in American society that were framed in the terror era. The narrative of racial difference that lynching dramatized continues to haunt us.”

These two deaths, whatever the investigations produce, are surely additional evidence of that haunting.

The perception that something may have gone terribly wrong in the high desert can also not help but be affected by the findings of a 2013 U.S. Department of Justice investigation into race-related problems at two Los Angeles County Sheriff’s stations in Lancaster and Palmdale.

“Racial intolerance is an unfortunate part of the history of the Antelope Valley,” wrote then-Assistant U.S.  Attorney General Thomas E. Perez in the investigation’s introduction  “As of 2010, the Antelope Valley had the highest rate of hate crimes of any region in Los Angeles County.”