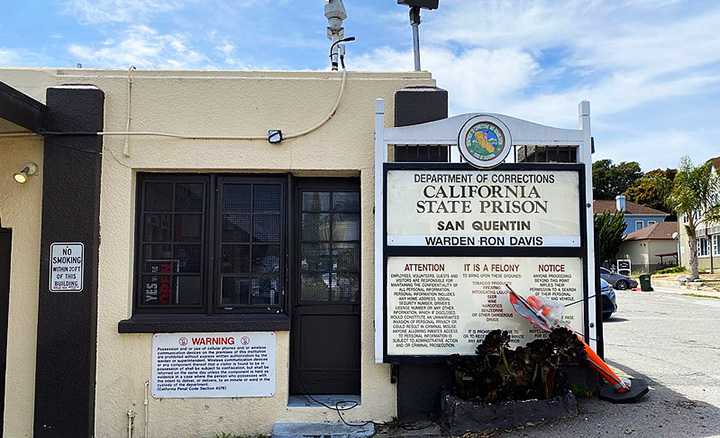 San Quentin prison is nearly eight months into its COVID-19 lockdown meaning that at least 1,600 prisoners spend more than 23 hours a day locked in windowless four-foot by ten-foot cells.

Multiple studies show that the unventilated housing units, five tiers high, have their windows welded shut, which makes them perfect environments for the coronavirus to thrive.

Since June, nearly three quarters of San Quentin’s approximately 3,000 prisoners have contracted this virus. Of those, 28 have died. 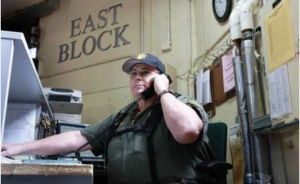 Each week, the pattern continues.

“My program now is basically in the cell, reading or watching TV,” said Daniel Karamer, 52. “I’m lucky to get a shower or phone call.”

Every other day, about 160 of north Block’s 800 prisoners (where Kramer is housed) are let out of their cells for 90 minutes, tier by tier, until prisoners on all five tiers get a chance to shower in one of ten community showers, and/or go to the prison yard and/or make a 15-minute telephone call on one of 12 phones, if sign-up slots are available.

“Yesterday, three inmates on the fifth tier, who just came into the building, tested positive and they moved them out of the building today.

North block is currently kept at around 180 percent of designed capacity meaning that two people live in cells smaller than the average parking space; and if the two people in the same cell test negative for COVID-19, prison officials force them to separate.

“Our intention was not to punish any patient who tested negative. Some patients who tested negative were simply being moved so that they were located farther away from anyone in the same unit who was active with COVID, but refusing to move. There were also a number of people who refused to test, so their status was unknown. We moved these true negative patients further away from the ‘unknown’ patients to lessen the risk of the negative patients becoming positive. We are sorry if this felt punishing, but it was the best way we could keep you safe and healthy.”

Kramer said he wants prison officials to pass out hand sanitizer and new masks. He suggested that opening windows in North Block might allow “proper ventilation.”

Such suggestions have been mostly ignored.

Kramer, incarcerated since 200, has been at San Quentin eight years.

“This is the worst it’s ever been,” he said. “It will probably get worse.”

Kramer is serving a sentence of 40 years to life under California’s three strikes law. But a newer California law will get him to the parole board in 2028, after he has completed 25 years of his sentence.

Before the COVID-19 crisis, Kramer said he enjoyed a good rehabilitative program. He was two classes away from graduation from a 16-week substance abuse program, took part in the Alcoholics Anonymous Big book study group, which included having an outside sponsor visit him once a week. And he was part of a peacekeeping program that teaches prisoners communication skills. Now all of these were on hold during the virus lockdown.

Kramer is one of a list of prisoners who continue to test negative for COVID-19, which means its own set of restrictions and fears. Cody Brown, 34, said that, since June, he’s been tested repeatedly, and has always tested negative. Even now, he still gets tested about once a week.

Brown says he’s fearful every time he takes the COVID-19 test because he thinks if he tests positive, he’ll be “sent to the hole to be quarantined.” He also worries about getting his regularly scheduled treatment for Crohn’s disease, which requires an infusion of the drug, Remicade, every six weeks.

“I was almost completely cut off from my treatment after COVID hit San Quentin,” Brown said. “After that, my medication was changed to something that didn’t work, and I had a severe flare-up. I had to practically beg to get my other medication back.”

Brown said he finally got Remicade reinstated but now is worried about dental treatment and a nagging problem with one of his legs.

“They told me, if it wasn’t COVID-related, it wasn’t a priority,” Brown said after he asked for medical help. “I worry about having a compromised immune system, and that something might go unnoticed without proper attention being paid to my Crohn’s, teeth, or leg.

“I also worry about older inmates with serious conditions that aren’t getting proper medical care.”

James Carr, 51, has been incarcerated 20 years. He’s been in North Block since 2012. He says he’s tested negative for the virus over and over.

“I’m required to take the test every week or be disciplined with a 115 (a rules violation) for refusing,” Carr said. “They tell me that they must test me until I catch COVID.”

Carr normally works in the prison’s furniture factory as a shipping clerk, but since the COVID-19 crisis, the factory has been shut down, and Carr has become one of several North Block inmate volunteers.

“I found myself doing whatever was needed in the building, like cleaning or serving food, or helping others,” Carr said.

After a June prisoner transfer from California Institution for Men in Chino California brought the virus to San Quentin, Carr said there was “a lot of chaos and confusion,” in North Block.

(The transfer of men from the Chino prison, which was already a COVID hotspot, was cited by prison officials and attorneys representing affected prisoners, as the source of the San Quentin COVID-19 crisis)

“No staff expected this to hit like it did,” said Carr. “In the turn of those events, it became all trial and error and most staff couldn’t cope with it.”

As other prisoners contracted the virus and he kept testing negative, Carr volunteered to perform janitorial duties and food services duties.

“I served food and cleaned up, day and night,” Carr said. “I saved other intimates just lying in the cells dying. I was tired but I rose each day, fighting and praying that I didn’t get sick. God blessed me to keep doing my work and help others.”

‘Now, I’m locked in my cell because, being negative, I can’t work, period. Their reason for this is I might catch COVID-19. My question is: why weren’t they concerned for my safety when they needed me?”

Carr says he’s made many suggestions to the administration that would improve living conditions, with the pandemic and without. But, although prison officials sometimes seemed to like the suggestions, the liking “just ended up being broken promises and wishful thinking.”

Author Juan Moreno Haines is an award-winning incarcerated journalist and a member of the Society of Professional Journalists. Haines is also a past recipient of a Solitary Confinement Reporting Project grant,  and has recently focused his work on the massive outbreak of COVID-19 at San Quentin, which he continued to write about after he contracted the virus himself, and was moved into solitary confinement.  This is Juan Moreno Haines’ first essay for WitnessLA.

Above photo of San Quentin East Gate by Jesstess87, via Wikimedia Commons