As most readers know, WitnessLA has been publishing a series of essays written through the FirstWatch project at San Quentin State Prison. The authors of the essays are talented San Quentin inmates who aim with their writing to, as they put it, explore “the connections, challenges, and intimacies between self, society, and incarceration.”

In the essay below, author James King explores whether San Quentin State Prison’s much-lauded programs make it a model for future prisons, or whether the whole idea of “model prisons” is wrong-headed, and for real reform, we need to go upstream of the corrections model altogether, or….well we’ll let him tell you.

Is San Quentin the Model for a More Effective Prison System? Or Are We Asking the Wrong Question?

I hear it all the time. “San Quentin is unique,” “If only we could take what’s happening here and reproduce it in other prisons,” blah, blah, blah.

You know what? That was kind of overdramatic. Let me start again.

I have yet to meet anyone here who doesn’t think San Quentin is the best prison in the state, and possibly on the country. As a person who has been here for nearly six years, I can confirm that the opportunities at this institution make this far-and-away the best prison experience I’ve ever had. Of course, that’s kind of a low bar, isn’t it?

I live in a building with about 800 other people. The cells are very small, the tiers are narrow, there are less than twenty showers, and there is always some cold or virus floating around. When I’m in a bad mood, (usually because I just got sick) I think of San Quentin as less of a prison and more of a petri dish. On a related note, I recently read that the life expectancy for incarcerated people is over ten years shorter than it is for non-incarcerated people.

Overall, close to 4,000 people live here. There are about 100 self-help groups that cover everything from substance abuse, to empathy for survivors of crime, to developing emotional intelligence, to rehabilitative programming through recreation, coding, writing, acting…the list is long and varied. So are many of the waitlists. Some of the more comprehensive groups have curriculums that take one to two years to complete. The waitlists for those groups can be very long. I’ve been waiting to start a couple of groups for the entire five-plus years I’ve been at San Quentin.

Of course, something is better than nothing and I have had opportunities to attend groups and programs that I would not have had if I were not here. I can’t help but wonder though, wouldn’t the rehabilitative programming be more effective if this prison wasn’t so crowded?

In other words, if we could create access to more resources for incarcerated people, would that then be the model for a more effective prison system? It’s tempting to answer yes, but instead of seeing SQ as the future of prison reform, I believe it’s an important example of the conflict between reform and decarceration.

One thing prisons can’t address are the socioeconomic factors that make crime more likely in certain communities. Many leading social scientists have long asserted that focusing on social issues like poverty and intergenerational trauma rather than individuals who commit crime is key to creating safer communities.

Put bluntly, the more resources a community has, the less likely crime is. That’s not a coincidence. And that’s not a reflection of the quality of the people in those communities. As one person recently wrote, we’ve long confused the best of with the best off.

The system we are trying to reform is one built on the premise that individuals alone are responsible for crime. For decades now, our criminal justice system has permeated marginalized neighborhoods and siphoned off people who commit crimes for increasingly long sentences. Even as, of late, the sentences have shortened, we’ve still opened up whole new categories of crime, like the relatively new “hate crimes”, and created a system that’s akin to a bathtub that has the plug pulled, but the faucets turned up. A small number of people are draining out, but many more are in the pipeline. And all the prison reform in the world won’t fix that. That’s what makes San Quentin such a fitting case study for the future. The programming is beneficial, yet always undermined by the living conditions.

At their best, the groups we take here will prepare us to re-enter our old neighborhoods and better cope with the lack of resources, and resulting trauma. What it won’t do is create a more equitable society. Until we create a system that works for everyone, people will continue to break laws. Not because they are bad people, or because they are mad about their status in life, but more basically because being marginalized is traumatizing and it takes an exceptional person to endure sustained trauma without developing unhealthy thinking patterns and behaviors.

If there is a way to make the public safer by addressing individual actors, while failing to acknowledge larger socioeconomic factors, I’m not sure San Quentin has found it. Maybe we’re on the right track, but there is a major culture shift that has to happen. Ultimately, what I hope to see is a method for treating people who break laws in a humane matter, realizing that people only hurt others because they have yet to develop the tools to deal with past harm in their own lives. Maybe that’s a prison, maybe it’s something else that we have yet to name. We need to be all-in on healing people and creating more access to opportunity.

Many people are impacted by under-resourced schools, pervasive unemployment, and numerous social and cultural factors before they ever break the law. The future of reform requires reforming all aspects of our society, not just our prisons.

Author James King is a contributing writer for Re:vision, San Quentin. Some of his influences are James Baldwin, Angela Davis, his hometown of Ferguson, Mo, and that philosophy that all oppression must be eradicated. He writes to introduce marginalized perspectives, and he writes to feel whole. 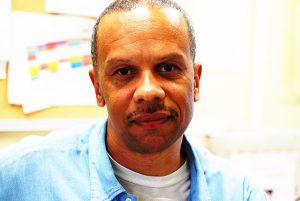