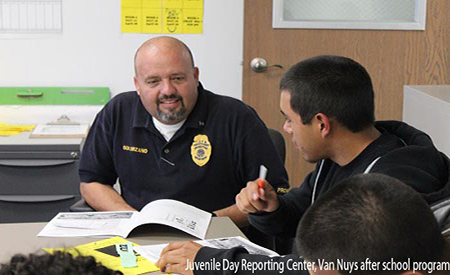 On Tuesday, the Los Angeles County Board of Supervisors unanimously voted to explore ways to coordinate and expand diversion efforts for the county’s justice system-involved youth.

The motion put forward by Supervisors Mark Ridley-Thomas and Janice Hahn, directs LA County CEO Sachi Hamai to hire an expert on youth diversion as a consultant for the project.

The Supes also tasked Hamai with creating a subcommittee of the Countywide Criminal Justice Coordination Committee to be comprised of relevant county officials—representatives from the Probation Department, Juvenile Court, the Office of Diversion and Reentry, the Dept. of Children and Family Services, and others. The sub-committee will coordinate the county’s juvenile diversion efforts during the short term, and will report back to the Board of Supervisors in 120 days with a plan for expanding effective diversion programs and practices.

“This motion is centered on figuring out what works when it comes to serving and diverting youth, and then expanding and investing in those proven strategies,” said Ridley-Thomas, the principal author of the motion.

The county’s current youth diversion efforts do not equally benefit young people of all races. “While nationally, African American and white youth commit minor offenses at roughly similar rates, including drug offenses, status offenses (i.e., truancy), stealing property, and fighting, African American youth are far more likely to be arrested for these offenses, far less likely to have their cases diverted pre-adjudication, and more likely to be incarcerated than their white peers,” the motion reads.

Access to diversion programs is not equal for kids in different regions of LA County, either. It “depends in large part on where a young person lives and what law enforcement agency is patrolling that region,” according to the motion.

The new effort has received the support of the LA County Probation Department. “We’re in full support of the motion because it further gives us the opportunity to keep children out of the justice system or to minimize their involvement in it,” Chief Deputy Probation Officer Sheila Mitchell said. “Children that don’t pose a risk to public safety need not be in the juvenile justice system.”

Justice system involvement for low and moderate-risk youth is stigmatizing and often leads to further involvement with the justice system, according to the motion. Taking kids out of their homes and communities and locking them up increases their odds of dropping out of high school, struggling to find employment, and experiencing homelessness, and often adds to kids’ trauma.

“We have criminalized too much of what ails young people across this country,” Dr. Ross said. “We must prioritize ways of helping to hold them accountable while keeping them out of the justice system.”

It costs over $247,000 to hold one kid in an LA County probation camp for one year, according to the most recent estimate.

Dr. Ross pointed out that many of the community programs he learns about through his colleagues cost around $7,000 per kid, annually, in comparison.

“Punishment and incarceration are not the only ways,” Ross said.