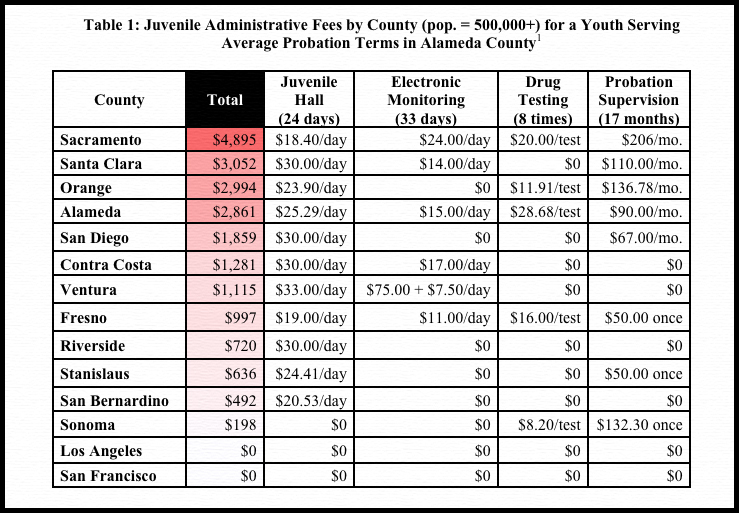 Sacramento County will no longer collect fines and fees from families of juveniles involved in the justice system, thanks to the county’s Probation Department and Public Defender’s Office.

Sacramento is among a growing number of counties abandoning the practice, which often puts a serious financial strain on low-income families. Both Contra Costa County and Alameda County stopped collecting juvenile justice-related fees in 2016. Los Angeles and San Francisco do not charge these administration fees to kids’ families. LA County approved a moratorium on the fees in 2009. (SF never charged the fees.)

In Sacramento County, parents foot the bill for their children’s public defender fees, supervision, and drug-testing, as well as placement fees for kids kept in state facilities and probation camps, and “service fees” for things like food and laundry for locked-up kids. The daily fee for kids housed inside the Youth Detention Center is $18.40. The monthly supervision fee is $206. The monthly fee for electronic monitoring is $725. Drug tests are $20.

The Sacramento County Probation Department requested the fee elimination, along with the Public Defender, and the Department of Revenue Recovery. The move “will ultimately have a positive impact on the youth’s families we work with on a daily basis,” the probation department said. Only a small portion of the fees charged are ultimately successfully collected.

For the current fiscal year, Probation is slated to receive $240,500 in net revenue from the fees—minus the Department of Revenue Recovery’s cost of collecting from families. The Public Defender’s Office is budgeted to receive $85,000 in fees for representing indigent youth. The Conflict Criminal
Defender, which takes on juvenile clients whom the Public Defender’s Office can’t represent, is budgeted to receive $60,000. All told, those revenues total $385,500. Those departments will lose a similar amount during fiscal year 2017-2017, which starts in July.

At the state level, Senators Holly Mitchell (D-Los Angeles) and Ricardo Lara (D-Bell Gardens) introduced SB 190 to eliminate the collection of fees from families for kids’ juvenile justice system-involvement. The bill is part of a package of proposed legislation aimed at reforming the justice system and keeping kids from becoming justice system-involved. That bill was placed on suspense in the Senate Appropriations Committee.

In a 2016 op-ed, the Sacramento Bee’s Dan Walters explains that using the suspense file has become a way for lawmakers to meet and decide behind closed doors which bills will move forward, and which will be dumped.