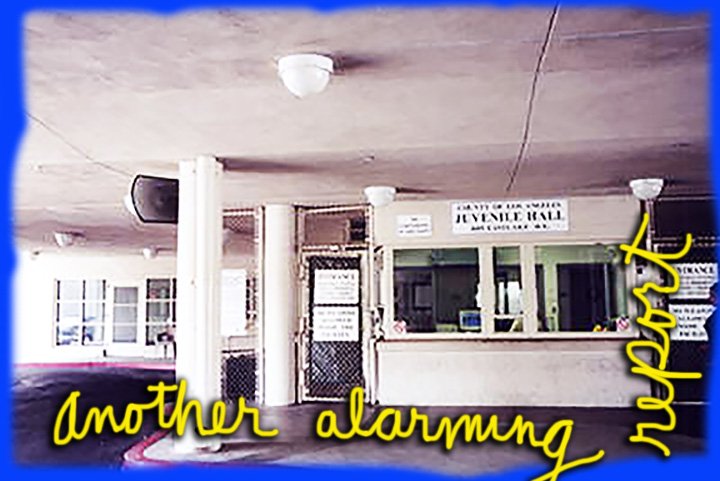 On May 31 of this year, another incident of alleged abuse of a teenage probationer by Los Angeles County Probation staff reportedly occurred in a county juvenile facility. This most recent reported assault took place at Central Juvenile Hall, located on Eastlake Avenue, east of downtown LA.

Unlike the April 2016 beating of a seventeen-year-old boy by four probation staff members at another LA County Probation juvenile facility—that WitnessLA reported last month— this time there was no video of the incident.

But there were witnesses. And the event was deemed serious enough that at least one witness called the police.

We have obtained a written account from one of the witnesses. This source is not a probation staff member but a member of another county agency that has personnel working in LA’s juvenile halls and camps.

According to the witness, the incident began at around 10 a.m. in what is known as the B-wing of the aging facility. A male student had been kicked out of class for a reason that was unknown to the witness. (We have since heard from a source inside probation that the student was being “disruptive” in some manner.)

Once the student was asked to leave class, he entered the hallway outside the classroom where he was intercepted by probation staff who presumably had been alerted to his impending exit.

According to the witness, the student was “restrained by three probation staff,” who initially, she wrote, shoved him to the floor and handcuffed the boy, who is 14-years-old, and reportedly physically small. According to our source, he was also an “RSP” student. (RSP stands for Resource Specialist Program, which means he had some kind of learning designation that qualified him for special education.)

The problem began, according to the witness’s account, when a senior Detention Services Officer—or DSO—began to pull the now-handcuffed kid from the floor to a standing position. But, because the boy was face down with his hands restrained behind his back, the pulling motion yanked his arms up and back in such a way that the boy found painful.

“You’re hurting me” he said. According to the witness, the DSO appeared to be irritated by the complaint so pulled the kid up even harder, this time using the back of his sweatshirt to do the yanking, which reportedly caused the sweatshirt to produce a visible choking effect.

The handcuffed kid retaliated by calling the DSO the N-word. According to the witness’s account, things went rapidly downhill from there.

The senior DSO reportedly “got very upset” and bunched the back of student’s sweatshirt with his hand and yanked, further choking the student “while [the] student is trying to tell him” that he is being choked.

“Tell me again and I’ll do it harder!’ the DSO reportedly yelled at the kid.

The 15-year-old boy immediately took the DSO up on the offer.

Meanwhile, the senior DSO “kept pulling him straight up” with the student’s sweatshirt, and the student reportedly kept choking.

“It was unpleasant to me to…witness this,” wrote our source, since the “student is already handcuff[ed] and restrained” and the boy “had no other way to defend himself.”

That’s when somebody called the Hollenbeck division of the Los Angeles Police Department.

After the police had come and gone, according to the witness’s account, probation staff members approached an administrator in charge of the LA County Office of Education (LACOE) workers present in the hall. (Both LACOE staff and some Department of Mental Health–DMH–witnessed the incident.)

“If your staff is going to be snitching,” the probation staffer reportedly said to the administrator, “then we won’t be here to help with nothing.” In the days to follow, according to the witness, various DSOs attempted to question civilian staff “to find out who made the report.”

Some of the civilian witnesses who saw the senior DSO allegedly manhandle and “choke” the teenager with the kid’s sweatshirt, talked to other volunteers who were present that day, one of whom talked to us with alarm about what he’d heard of the incident, which matched our witness’s written account.

LA County Probation Chief Cal Remington, told WitnessLA he was aware of the choking incident but could not comment in detail, due to legal constraints. “Anytime there is an incident of hands placed on a kid, we expect reports,” Remington said. “We review those reports, and we take the incident very seriously.” This incident was no exception, he said. “The investigation for this alleged incident is still ongoing.”

Yet, other county officials say they are disturbed by this newly reported incident. And when the topic came up briefly on Wednesday morning at the LA County Probation Commission meeting, several commissioners who had heard anecdotal accounts of the so-called “choking” expressed dismay that—as with the story of beating of a 17-year-old in Sylmar—they were not getting any information or notification from probation officials, but only learning about these alleged occurrences through back-door sources.

“On May 31 a kid was choked by a supervisor to a point that was so bad…the police were called,” commissioner Azael “Sal” Martinez-Sonoqui said to probation higher-up who was at the meeting to answer questions on another topic. “And yet nobody here was notified!” (We profiled Sal Martinez here.)

Commissioner Cyn Yamashiro expressed a similar frustration. (Yamashiro is also the founding executive director of the Center for Juvenile Law and Policy at Loyola Law School.) “I thought we had moved past this notion of ‘hide-the-ball,’” he said. But today, he continued, feels like “we’re returning to the way it used to be.”

With like concerns in mind, at Tuesday’s board of supervisor’s meeting, supervisor Mark Ridley-Thomas proposed a motion that asks probation for, among other things, data on the “types and prevalence” of “critical incidents”—such as the two reported here—that have occurred over the past three years in the county’s three juvenile halls, and thirteen probation camps.