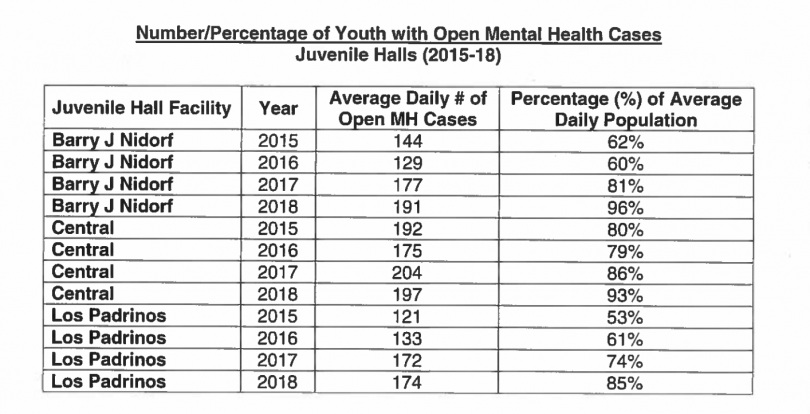 At Barry J. Nidorf Juvenile Hall in Sylmar, CA, the percentage of kids with open mental health cases is at 96 percent, according to the most recent report submitted to the board of LA County Supervisors in late April by Jonathan Sharin, MD, the head of the county’s Department of Mental Health.

The percentage at LA County’s third youth camp, Las Padrinos, which is in the process of being shut down, was at 85 percent, according to the report’s numbers.

In case you’ve not yet done the math, this means that overall 91.3 percent of the youth in LA County’s juvenile halls have been diagnosed with some kind of significant mental health challenge.

The DMH report explains that these percentages point to a range of things, including dealing with severe mental disorders, particularly trauma-based disorders, and/or substance use disorders.

The same youth may also suffer from suicidal thoughts. They may be “self-injurious,” or display “aggressive behavior,” which can be made worse by a jail-like environment, according to Sharin. They are likely to have experienced “sexual exploitation,” homelessness, and other major traumas that can exacerbate “underlying mental disorders,” or create new ones.

Yet, the county’s current incarceration model, according to Sharin’s report, “is flawed and fails to adequately meet” the needs of these kids and their families.

With the DMH report and more in mind, on Tuesday, the LA County supervisors took significant steps toward a “care first” and “incarceration as a last resort” model for its juvenile facilities—and also for the county’s adult system.

(We’ll get to the adult part in a minute.)

Most notably, the board approved a motion, authored by Supervisors Mark Ridley-Thomas and Janice Hahn, to significantly boost efforts to divert kids with mental illness away from the county’s probation camps and juvenile halls, as well as to increase mental health services to kids who still wind up in the county’s youth facilities.

The issue of inadequate mental health care in the halls and camps “is not a new problem,” Supervisor Ridley-Thomas said Tuesday in introducing the motion.

More than 15 years ago, in 2003, a U.S. Department of Justice investigation found that the county was failing to properly address the mental health needs of the kids under its supervision. Yet, “the county continues to struggle with this issue, and we have not met our commitments,” according to Ridley-Thomas.

“Failure to adequately address the mental health needs of justice-involved youth has had serious consequences for the county over the years–and shall I say, even the decades.”

Added to the problem according to Sharin’s report is the fact that, due to a shortage of Department of Mental Health staff in the halls, detention service officers are left to work with these high needs kids on a day to day basis, often without the proper training or programs.

Sharin’s April 26 report was ordered up by the supervisors following the delivery of a February 2019 report by the LA County Office of Inspector General, which found that too often, officers in the juvenile halls, in particular, used pepper spray not as a final resort to gain “control of” dangerous situations with youth, but as the “first or second resort.” According to the OIG, pepper spray was also sometimes used on kids who were injuring themselves, and in other situations likely involving mental illness.

The Feb. report also pointed to serious understaffing of Dept. of Mental Health workers, as well as limited mental health training for probation officers, who said they felt ill-prepared to properly de-escalate tense situations with youth in their care.

In response to the OIG’s report, the Supes voted to phase out the use of pepper spray in juvenile facilities over the next year.

They also directed the LA County Department of Mental health to report back to the board with an analysis of the mental health needs within the county’s juvenile lockups, as well as areas the county could “improve trauma-informed approaches and reduce use of force.”

Now that the DMH report is finished and delivered, the board is ready to go still further.

According to the DMH report, the increase in kids with serious mental health needs in lockup has much to do with the fact that residential treatment programs and other “non-carceral” options for kids “have closed, downsized, or decided not to serve” justice system-involved youth.

“As a result, youth who remain detained and housed in Probation facilities, particularly juvenile halls, are significantly more likely than youth from a decade ago” to suffer from the severe mental disorders and other mental health problems described above.

Increasingly, the county’s response to kids struggling with mental health issues includes psychotropics. As a result, according to the report, the number of kids prescribed psychotropic drugs made a startling jump from 26 percent in 2018 to 35 percent in 2019.

Collaterally, the same unsuccessful approach is resulting in stressed out staff who feel they don’t have the right tools to deal with the high-needs kids in their care.

“These sobering findings lead to the unavoidable conclusion that a fundamental paradigm shift to a ‘care first’ model is required to achieve rehabilitation and public safety,” Ridley-Thomas continued. “We cannot allow the status quo to continue.”

The mission of the county’s probation department “is rehabilitation,” he said.  “It seems to me it’s high time we return to that and embrace it accordingly.”

Not surprisingly, the DMH report suggests that punitive treatment in juvenile lockups should be replaced with community treatment and trauma-informed care in “home-like” residential facilities.

Four hundred miles north of LA, local officials have voted to do just that. Last week, the San Francisco Board of Supervisors voted 10-1 to shut down its only juvenile hall, opting to replace it with diversion to community-based programs, and “home-like” options for those kids who must be locked up according to state law and to protect public safety.

Tuesday’s motion directs DMH and the Office of Diversion and Reentry, in consultation with the county’s other justice-related departments, to report back to the board in 120 days with a “plan for increasing community-based diversion and alternative placement options for youth with mental health needs to, whenever possible, avoid detention in the juvenile halls and probation camps and ensure the least restrictive and most integrated setting possible.”

In a preview of these hoped-for solutions, the DMH report included 16 recommendations for sweeping reform, including expanding diversion, using risk-based assessments, bringing parents into the fold when addressing kids mental health needs, boosting mentorship opportunities,  bringing in far more in the way of rehabilitative programs…and more.

“I believe that young people who have made mistakes and committed crimes can change their lives and get back on track with the right support,” said motion co-author Supervisor Janice Hahn. “As the social safety net, it’s up to LA County to be that support system and give our young people the emotional tools they need to build healthy and happy lives.”

In the same vein, at Tuesday’s board meeting, the highly-praised Alternatives to Incarceration Workgroup submitted a preliminary report to the Supes with 140 recommendations for prioritizing diversion and mental health care over incarceration in the adult justice system.

In its 80-page interim report, the county-created workgroup, assembled by the supervisors in February—and led by Dr. Robert Ross, President of the California Endowment—has laid out a preliminary road map by which the county can propel critical new reforms, expand evidence-based programs already in place, and ramp up data gathering and analysis.

“We have a system now that is too often framed by punishment and criminalizing behavioral health conditions,” Dr. Ross said, addressing the board. Instead, the county must move on to a “community-based system of care–a system that is more decentralized than not, one that is fully integrated, networked, and holistic.”

Dr. Ross said he has been pleased by the board’s support, but also by the fact but that every member of the workgroup—which included representatives from the DA’s office, the sheriff’s office, the county’s public defender and alternate public defender, along community members—all expressed their belief in the report’s banner headline of “services provided as a first resort and jail as the last option.”

The workgroup’s recommendations are broken down into five categories: Community-Based Systems of Care, Justice System Reform, Community Engagement, Funding, and Data and Research.

Noteworthy recommendations include building more “restorative villages”–community centers with wraparound services like that of the Martin Luther King Jr. Medical Center, opening more “psychiatric urgent care centers,” and expanding the use of conservatorship for people exiting jail who are deemed “gravely disabled as a result of a mental health disorder.”

The report also recommends the LA County Sheriff’s Department do something to address the fact that just 20 percent of officers have completed “crisis intervention training.” Additionally, the department’s Mental Evaluation Teams (MET), which pair deputies with mental health clinicians to respond to psychiatric emergencies, must be further expanded to meet community needs.

In addition, the report stresses that 911 operators should have sufficient training in assessing mental health emergencies so that they can identify those calls “that do not require a law enforcement response.”

The county needs more crisis beds within treatment facilities, and people exiting lockup need more options and better access to reentry services, according to the report.

And one simple way to ensure more people have access to important services, the workgroup politely suggested, is to direct the sheriff’s department to stop releasing people from jail at all hours of the night.

The Matter of the Mental Health Facility Construction Plan

In the public discussion that followed Dr. Ross’s presentation, the matter of the county’s large and pricy mental health facility construction plan predictably came up.

In February, the supervisors voted to radically change their plan to replace the unhealthy and unsafe Men’s Central Jail facility with a high tech mental health jail known as the Consolidated Correctional Treatment Facility (or CCTF). Instead, the nearly uninhabitable, 1963-built downtown LA jail will be replaced by a shiny new “Mental Health Treatment Center.” And that new treatment center will be operated, not by the Los Angeles Sheriff’s Department, which controls the county’s jail system, but by the county’s Department of Health Services. Furthermore, it will be staffed by the Department of Mental Health, instead of sheriff’s deputies.

Addressing the board on Tuesday, Peter Eliasberg said that the workgroup’s vision and the supervisors’ plan for a nearly 4,000-bed mental health care facility were “entirely incompatible” plans. Decentralizing justice in Los Angeles, Eliasberg said, “does not mean building the largest mental hospital in the state of California on a single site downtown.”

Expressing similar sentiments in response to the preliminary report, the Advancement Project, Community Coalition, and LA Voice, too, praised the workgroup’s recommendations and called on the board to move away from its plan to replace the crumbling jail.

“By creating a road-map for how the County can invest in community prevention strategies and scale up diversion and re-entry programs,” the trio of community organizations wrote, “the Workgroup can help point the way out of this destructive cycle of criminalization and incarceration.”

The final “roadmap” to reform is due from the workgroup in December.