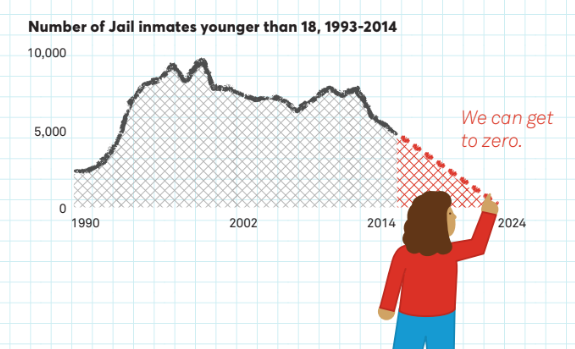 While most kids tried in adult courts are held in juvenile detention facilities, approximately 32,000 kids (60,000 by some less conservative estimates) are placed in adult jails every year, “Getting to Zero,” a report from UCLA School of Law’s Jail Removal Project reveals. The project, according to the university, is “aimed at preventing the short- and long-term adverse health and developmental consequences of youth contact with the adult jail environment by identifying strategies that allow youth to bypass jails.”

The UCLA group analyzed three national datasets–the Bureau of Justice Statistics’ Census of Jails and Annual Survey of Jails, and the Office of Juvenile Justice and Delinquency Prevention’s Census of Juvenile Residential Placements. Researchers calculated state and county-level rates of juvenile incarceration in adult jails, and identified trends and strategies in counties and states that successfully reduced or eliminated the use of adult jails for kids accused of crimes.

Where It All Began

The number of kids thrown into the adult system increased with the rise of the “superpredator” myth.

In the early 1990s a wave of teen violence prompted a small cluster of academics led by political scientist John Dilulio to forecast the emergence of a new breed of children—”superpredators”—impulsive kids without compassion who would commit innumerable violent crimes.

The superpredators never arrived, and the myth was eventually debunked, but not before the theory did a great deal of damage, producing harsh sentencing laws for juveniles.

Since the 90s superpredator panic, the number of kids in adult court and sent to adult jails and prisons has been steadily declining.

Yet, for advocates, kids, and their families, these numbers are still far too high, considering the collateral consequences of housing kids in adult facilities. Members of the UCLA project say that number should, in fact, be zero.

The Problem With Sendings Kids to Adult Jails

Research shows that transferring kids into the adult criminal justice system makes them more likely than their peers in the juvenile system to later commit additional serious crimes.

One study, by the national Centers for Disease Control, found that kids processed in the adult system were 34 percent more likely to be re-arrested for violent crimes than those kept in the juvenile system.

“Trauma begets trauma and jail begets more jail when it comes to our children housed in adult facilities,” David Condliffe, Executive Director of the Center for Community Alternatives said, praising the report and its recommendations for reducing harm done to kids involved in the criminal justice system.

Adult jails are also ill-equipped to address the educational needs of juveniles and to provide them with the programming to which they are entitled, since juveniles must be totally separated from adults in jails and prisons.

Moreover, researchers’ analysis of the federal Office of Juvenile Justice and Delinquency Prevention’s Census of Juveniles in Residential Placement revealed that “juvenile facilities of all sizes and types are both available and equipped to handle the most serious youthful offenders.”

Yet thousands of kids are thrown into adult lockups each year.

A Quck Look at the States

The UCLA team found that nearly all of the kids locked in adult jails (around 90 percent) are held in 15 states: Alabama, Arizona, Florida, Georgia, Louisiana, Indiana, Maryland, Michigan, Missouri, New York, North Carolina, Pennsylvania, South Carolina, Texas, and Wisconsin. There were 109 other adult jails in 23 more states and D.C. that reported holding at least one juvenile in their facilities.

While most states’ laws allow youth tried as adults to be locked in adult jails, many states choose to house kids 17 and under in juvenile facilities. California, Illinois, and Ohio, for example, have laws which permit justice systems to hold youth in adult jails under certain circumstances, but none of these states have large numbers of kids in adult jails.

California had four minors in one jail—Contra Costa County’s Martinez Detention Center—when the last Census of Jails was taken in 2013.

Since 2009, 20 states (and D.C.) have passed laws, many of which “raise the age” of adult court jurisdiction, which have started to reduce the number of kids in adult jails. In 2007, more than a dozen states excluded 16 and/or 17-year-olds from juvenile court. By 2017, that number had dropped to just four states blocking older teens from juvenile court: Georgia, Michigan, Texas, and Wisconsin.

In California, the 2016 voter-approved Proposition 57 removed the power to transfer kids to adult court from the hands of prosecutors, and gave the control back to judges.

This year, in CA, a bill awaiting a signature from Governor Jerry Brown, SB 1391, would establish that kids under the age of 16 are too young to be sent to adult court.

In New York, home of the notoriously bad Rikers Island Jail, the state’s FY 2018-2019 budget included legislation to raise the age of criminal responsibility to 18. The law will be fully implemented by October 2019.

Mapping the Route to “Zero”

The report recommends states continue passing raise the age laws–“the single most significant strategy in the effort to remove youth from adult jails”–but also note that much more must be done to “get to zero.”

Researchers note that if six specific states–Alabama, Arizona, Florida, Oklahoma, Maryland, and Pennsylvania—changed their transfer laws and jail laws to ban youth from being held in adult jails when they are arrested, the number of youth in adult jails could potentially be reduced by an additional 26 percent.

At least five states also require counties to hold kids in adult jails under certain circumstances: Arizona, Florida, Maryland, Oklahoma, and Wisconsin. If these states instead, prohibited the placement of kids in adult facilities, it would reduce the number of juveniles in adult jails by 21 percent.

Change can also happen at the county level. The report found that most of the nation’s counties, including the aforementioned Contra Costa County, held fewer than 10 kids on the day of the 2013 jail census. “For these counties, the fix may be as simple as drafting a new county policy designating the juvenile detention facility as the default facility,” researchers stated. “If counties which held less than 9 youth at a time found other placements for these youth, the number of youth incarcerated in adult jails would drop by 33%.”