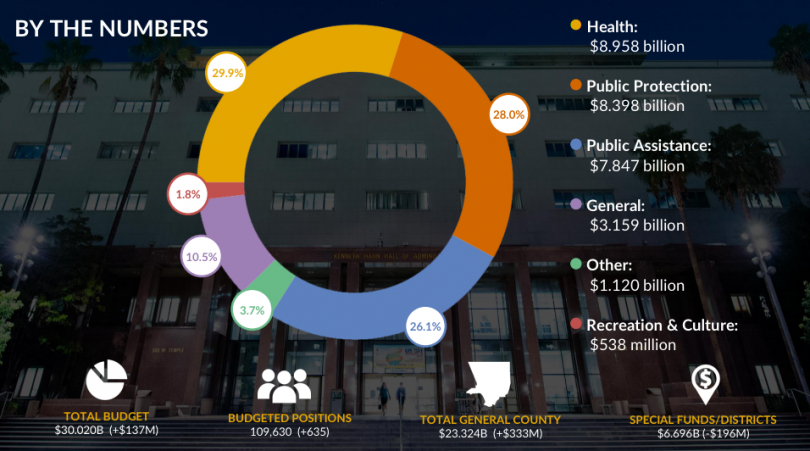 On Monday, Los Angeles County revealed a $30 billion proposed budget for fiscal year 2017-2018, which begins July 1. This year’s budget would be a modest increase of $137 million over the previous year’s budget.

Much of the budget is aimed at expanding services for the county’s most vulnerable residents, LA County CEO Sachi Hamai said.

“With investments in homeless services, child protection and healthcare, it is, at heart, about helping people,” Hamai said.

The budget sets aside $1.5 million for the nine-member LA County Sheriff Civilian Oversight Commission, which held its first meeting in January of this year.

The commission works with Inspector General Huntsman, whose office provides the commission its investigative function, on such issues as “use of force, firearms, custody, mental health issues, juvenile justice and patrol.”

An allocation of $4.2 million will pay for 22 attorneys from the Alternate Public Defender’s Office to represent juvenile defendants when the Public Defender’s Office is unable to provide counsel. Prior to a October 2016 decision by the LA County Board of Supervisors to move juvenile indigent defense to the APD’s Office, when public defenders could not represent juvenile defendants—due to a conflict of interest or other problem—the kids’ cases would get handed to private “panel attorneys,” who were paid an alarmingly low flat-fee stipend for the entirety of each case.

Another $90 million in funding is allocated for a diverse set of jail diversion and re-entry programs aimed at reducing recidivism and the county’s reliance on incarceration.

A total of $3.7 million in earmarked funds will provide the county with five new Mental Evaluation Teams, comprised of a specially trained sheriff’s deputy and a Department of Mental Health clinician. The MET teams respond to mental health crisis calls, and work to diffuse potentially violent situations and avoid arrests and hospitalizations when possible. During Fiscal Year 2015-2016, the MET program responded to 1,154 calls for service. Of these calls, 64% resulted in hospitalizations for mental health treatment. Less than 1% resulted in an arrest. The money will also fund a triage call-desk, which will streamline collaboration between the sheriff’s department and the Department of Mental Health. The triage desk will allow DMH to consult the LASD on how to safely and effectively resolve encounters with community members experiencing a mental health crisis.

An additional $25.7 million will combat the county’s critical shortage of foster parents by improving recruitment and retention efforts. An investment of $7.4 million will be spent implementing the state’s Continuum of Care Reform (CCR), which among other changes, is overhauling counties’ child welfare placement systems by eliminating traditional group homes, and by focusing on long-term placements with foster families.

Another $7.2 million will be spent on efforts to improve mental health care for children in the child welfare system.

A total of $2 million will go toward the Los Angeles City and County’s $10 million Justice Fund, which will provide legal defense to immigrants facing deportation proceedings. (Tomorrow WLA will have more about the the justice fund and the controversy over which immigrants should receive legal representation.)

A total of $355 million (this year, and annually, thereafter) will fund voter-approved Measure H, a quarter-cent sales tax increase that aims to prevent homelessness, help currently homeless residents move into affordable housing, and offer important services to the newly housed. The measure is expected to help a total of 45,000 families and individuals rise out of homelessness, while protecting 30,000 others at risk of homelessness from becoming homeless during the first five years of implementation.