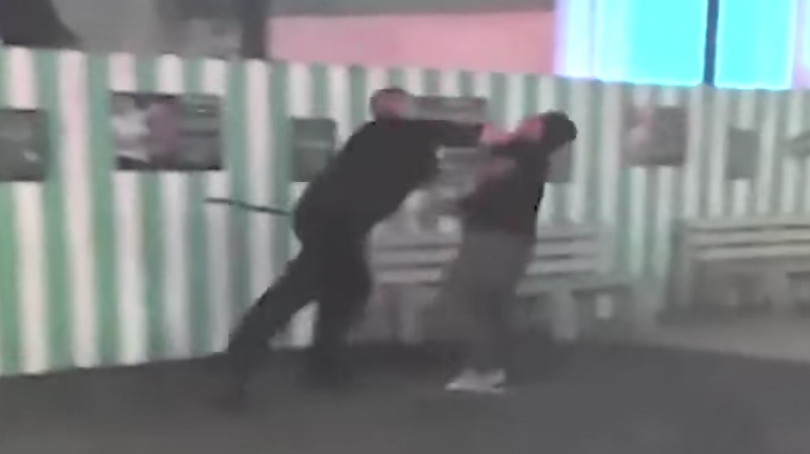 On Thursday, federal prosecutors indicted three members of the Pomona Police Department (PPD) in a case involving the alleged beating a 16-year-old at the Los Angeles County Fair, and an attempted cover-up of the assault. The case is being investigated by the FBI.

PPD Corporal Chad Kenneth Jensen, 50, the officer who allegedly beat the teen on September 16, 2015, at the LA County Fair, is charged with violating the boy’s rights under color of law. Officer Prince Taylor Hutchinson, 31, and Sergeant Michael Timothy Neaderbaomer, 49, are the other two PPD members named in the case.

A separate civil lawsuit filed on October 17, 2016, identifies the alleged victim as Christian Aguilar. Christian was 16 at the time of the beating.

Christian was punched in the throat multiple times, hit with a baton, and threatened with a taser, according to the complaint filed by the Los Angeles law firm Geragos & Geragos.

Officers reportedly arrested the teen’s father, Ignacio Aguilar, and his adult cousin, Gabriel Aguilar. The complaint stated that the two officers, Austin Dossey and Tim Dorn, engaged with Gabriel as he walked away from a beer vendor. Officers allegedly arrested Gabriel for not showing enough respect, and then falsely accused him of being “so intoxicated that he was a danger to himself and others,” the complaint said. The police allegedly accused Ignacio of the same, and cuffed and escorted the two men out of the fair.

Christian started filming the officers escorting his father from approximately 30 feet away, according to the complaint. “For no discernable reason,” Jensen allegedly grabbed Christian by the arm and moved him toward a fence, forcing the teen face-first into the fence. Then, Jensen allegedly spun Christian around and punched him “with two unprovoked forearm strikes,” despite the fact that Christians hands were down at his sides, the complaint stated. At this point Jensen’s partner, Officer Prince Taylor Hutchinson, 31, joined in, placing the teen “in a full nelson hold,” according to the complaint.

While Hutchinson held Christian, another officer, Ralph Correa, allegedly hit the boy with a baton. They forced Christian to the ground. Then, according to the complaint, and yet another officer, Todd Samuels, threatened the teen with a taser as they rolled him over to handcuff him. The police officers arrested Christian for allegedly resisting arrest.

“Christian was unlawfully held in custody with adults despite telling officers multiple times that he was a minor,” the complaint alleges.

Police reportedly arrested a man, Robert Hansen, who used his cell phone to film officers beating Christian. The video (below) shows the incident from the time that Officer Jensen allegedly spun Christian around and began punching him.

The police took custody of Hansen’s phone, according to the complaint. Then, officers reportedly gave a doctored version of Hansen’s video to the District
Attorney’s Office that aligned with their alleged false reports.

According to the indictment, the beating resulted in bodily injury, and Jensen violated the teen’s constitutional right to be free from the use of unreasonable force.

Jensen and Hutchinson are accused of writing false reports in an effort to justify the force Jensen allegedly used against Christian.

In the incident report, Jensen reportedly falsely stated that Christian attempted to punch him in the face, and that the minor came within arm’s reach of another officer who was in the middle of arresting someone.

The indictment says that Hutchinson also wrote a false report indicating that the teen came within a couple of feet of the officer escorting the arrestee. Hutchinson also allegedly reported false information that Christian had tried to stir up unrest among those in the crowd while Hutchinson was escorting him to a holding facility at the fairgrounds.

In addition, during court proceedings regarding (false) charges against the victim, the two officers allegedly obstructed justice by lying about the incident, as they had in their reports. Jensen and Hutchinson reportedly gave the impression that the youth posed a threat to other cops before Jenson beat him. (Officers Jensen, Samuels, Hutchinson, and Correa all testified under oath that Christian swung at Jensen, according to the 2016 civil complaint.)

The third PPD member charged in the federal case is PPD Sergeant Michael Timothy Neaderbaomer, 49, a member of the department’s Internal Affairs Unit. The sergeant is charged with obstructing justice for allegedly lying to Christian’s family in order to convince them not to report the beating to law enforcement.

Neaderbaomer “attempted to intimidate and corruptly persuade” the boy and his family, telling them that there was video footage showing Christian punching Jenson, according to the indictment. The sergeant also allegedly violated department policy by telling the teen’s mother that she would not be allowed to accompany her son to an interview with the PPD regarding a citizen’s complaint against him.

Neaderbaomer has also been charged with lying to FBI agents during their investigation of Jensen’s alleged violation of Christian’s civil rights.

The Los Angeles District Attorney’s Office charged Christian with two counts of resisting arrest, and the teen’s father was charged with public intoxication. All charges were dismissed.

The three officers were arraigned Thursday in federal court. Each of the defendants pleaded not guilty. They were released on $50,000 bonds.

A trial is scheduled to begin on December 19.

The excessive force charge carries a maximum sentence of 10 years behind bars, witness tampering and falsifying reports carry maximum penalties of 20 years, and lying to the feds means a max of five years. If charged on all counts, Jenson would face up to 50 years, Hutchinson would face a maximum of 40 years, and Neaderbaomer could get up to 30 years.

Hutchinson, along with Dossey and Dorn, are named as defendants in another federal lawsuit that was filed on October 4, the Inland Valley Daily Bulletin’s Joe Nelson reports. The suit alleges that the officers assaulted three brothers, wrongfully arrested them, and falsified reports that got the brothers charged with felonies. The charges against the brothers were dismissed after two years. This second incident happened less than one month after the Aguilar beating.