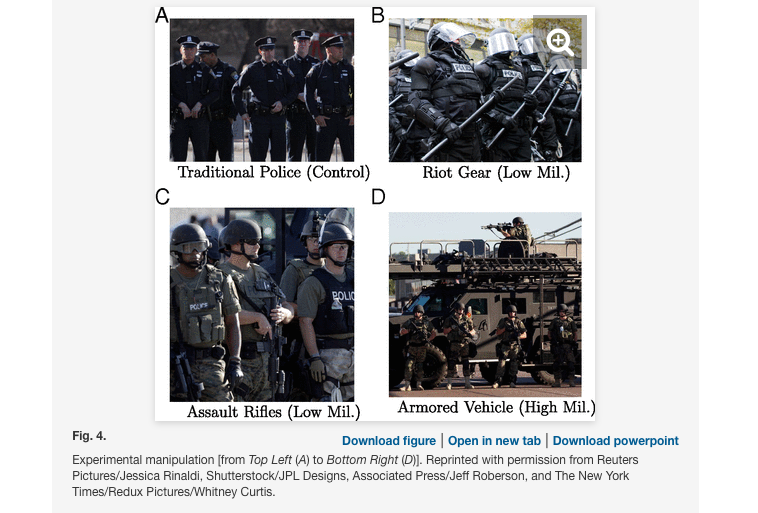 The way that SWAT teams are deployed in America today does not provide “detectable benefits in terms of officer safety or violent crime reduction,” as law enforcement agencies suggest, according to a report in the Proceedings of the National Academy of Sciences. What SWAT deployment and other forms of militarized—“heavily armed”—policing does do, however, says report author Princeton Assistant Professor Jonathan Mummolo, is erode the public’s trust in the police officers that serve them, especially in communities of color.

Hoping to uncover evidence—beyond “anecdotal and journalistic accounts”—of the effects of militarized policing tactics, a topic that is under-studied due to data limitations, Mummolo looked to Maryland. The state had unusually good data, including information on every single time local SWAT teams were deployed between fiscal years 2010 and 2014, thanks to a since-expired law. Police agencies deployed SWAT teams approximately 8,200 times during those five years.

Mummolo used the statewide SWAT census “to characterize the ways in which militarized police units are used and the characteristics of the communities in which they deploy. The researcher found that SWAT operations were conducted most often in neighborhoods with high concentrations of black residents “a relationship that holds at multiple levels of geography and even after controlling for social indicators including crime rates,” according to the report.

Mummolo found that more than 90 percent of the times that Maryland law enforcement agencies deployed SWAT teams, it was to serve a search warrant. Half of the search warrant raids were for non-violent crimes (mostly drug crimes). In 36 percent of the raids, SWAT officers did not arrest anyone. Less than 5 percent of deployments were in answer to emergent barricaded suspect scenarios, although these were the incidents for which SWAT teams were originally created.

Los Angeles had the first SWAT team, “developed in the wake of a series of emergency situations in which local police felt unable to respond as swiftly or as effectively as was necessary,” according to a 2014 ACLU report on police militarization.

According to the ACLU report—which compiled data on more than 800 SWAT raids by 20 local, state and federal agencies between 2011-2012—nearly 80% of deployments were to serve a search warrant, predominantly for drugs (thanks to the national war on drugs). Drug searches, the ACLU said, should almost always be done by regular officers—-not a paramilitary team. Only 7% of SWAT deployments the ACLU compiled were for hostage, barricade, or shooter situations—the original function of SWAT teams when they began at the LAPD.

And in at least 36% (but as high as 65%) of drug search raids, no contraband was found, according to the ACLU. Not all SWAT reports indicated whether they found contraband.

The ACLU report, too, found that SWAT raids disproportionately affected minorities. Of the raids executed to serve a search warrant, 42% targeted African Americans, and 12% targeted Latinos.

A little over three years ago, in 2015, the US Department of Justice and LA County agreed on a court-enforceable settlement to reform the sheriff’s department’s Lancaster and Palmdale stations. The settlement followed two years behind a 46-page “findings” letter from the DOJ detailing systemic discrimination against black (and to a lesser extent, Latino) Antelope Valley residents. The DOJ investigation found, among other problems, that officers from the Antelope Valley stations were conducting discriminatory drug raids—with “as many as nine” officers, sometimes in full SWAT gear—on people receiving subsidized housing assistance. The stations were working with the county Housing Authority with the intent to oust residents and push them into moving out of the area.

Mummolo notes, however, that officers fired shots in just 1.2 percent of the 8,200 Maryland raids (in approximately 100 incidents), suggesting that “indiscriminate violence is less common than some anecdotal reports suggest.”

Using within-agency comparisons that greatly mitigate concerns over omitted variable bias, I find no evidence that obtaining or deploying a SWAT team reduces local crime rates or lowers the rates at which officers are killed or assaulted.

The researcher conducted surveys, showing respondents an article about a police chief seeking a budget increase. The article was paired with either an image of police in traditional garb and gear, or one of several pictures of militarized police—wearing riot gear, armed with assault rifles, and using an armored vehicle—in order to gauge public perception of law enforcement.

Respondents who received one of the militarized images with their article had higher perceived levels of crime in the fake city. Those surveyed who saw the militarized police were also 3.2 percent less desirous of having more police in their neighborhoods than the respondents who got the traditional police image. The military-style photos also caused respondents who received the article with those images to be less likely to support giving the fake police chief more funding—as the images made the department seem already well-funded.

And past research has revealed that “negative views of police inhibit criminal investigations and are associated with stunted civic participation,” Mummolo added.

Mummolo suggests agencies stop using SWAT teams for low-level crimes and non-emergencies in order to help break down the mistrustful barrier these tactics erect between citizens and the cops whose job it is to protect them.

“Given the concentration of deployments in communities of color, where trust in law enforcement and government at large is already depressed, the routine use of militarized police tactics by local agencies threatens to increase the historic
tensions between marginalized groups and the state with no detectable public safety benefit,” Mummolo says. “While SWAT teams arguably remain a necessary tool for violent emergency situations, restricting their use to those rare events may improve perceptions of police with little or no safety loss.”