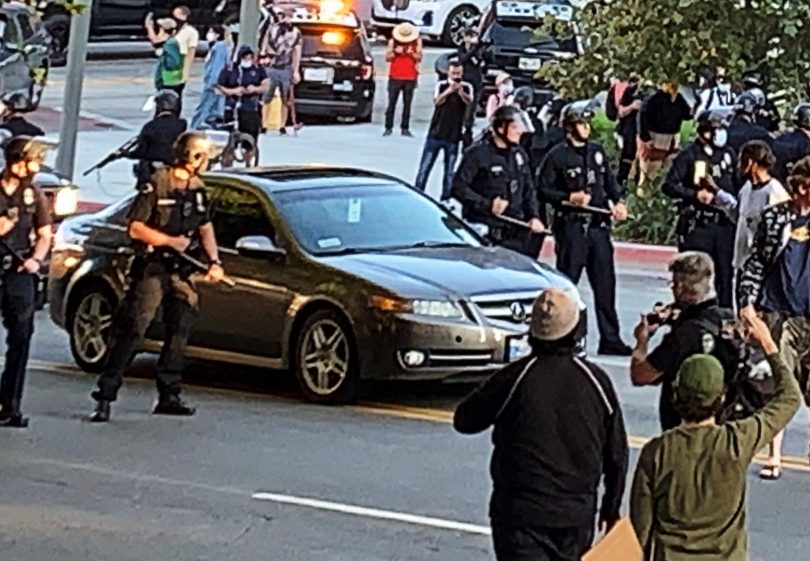 Right now, California legislators are working at record speed to push a COVID-reduced pile of bills through the Senate and Assembly committees before the August 31 deadline to send bills to Governor Gavin Newsom’s desk. The roster includes a number of fresh bills introduced in response to months of protests over racism, fatal police encounters and other instances brutality in policing, and in response to police agencies’ handling of the protests.

Most of these bills are sitting in the suspense files of the legislative houses’ Appropriations Committees, where they await a mass decision-making day on August 20, in which lawmakers will either let the bills die quietly or send them to the house floors for a vote.

SB 629 by Sen. Mike McGuire (D-Healdsburg) seeks to protect journalists covering protests and other demonstrations from being “intentionally assaulted, interfered with, or obstructed” from reporting by law enforcement officers. The bill comes after a number of alarming stories of journalists taking painful hits from rubber bullets in the face, head, and neck, despite identifying themselves as members of the press.

Another bill would require police officers to intercede when they witness another officer using excessive force on a civilian. The bill, AB 1022, by Assemblyman Chris Holden (D-Pasadena) would disqualify individuals from police work if they were found to have “used excessive force that resulted in great bodily injury or death or to have failed to intercede in that incident as required by a law enforcement agency’s policies.” And officers who fail to step in and stop excessive force could be charged as accessories to any crime committed in relation to that force incident.

In July, Governor Newsom specifically emphasized his support of bills to ban the carotid hold and changing police interactions with protesters, noting that additional reforms beyond these changes were needed.

Under, SB 731, by Sen. Steven Bradford (D-Gardena), the California Department of Justice would have the power to decertify police officers fired for misconduct or convicted of certain crimes “against public justice,” including falsification of records, bribery, or perjury. In this way, the bill would stop those officers from being able to jump to a new city and a new job in law enforcement.

Addressing Racism in the Courtroom

Another new bill, AB 2542, titled the “California Racial Justice Act” by Assemblymember Ash Kalra (D-San Jose), will “prohibit the use of race, ethnicity or national origin to seek or obtain convictions or sentences.” In 1987, a U.S. Supreme Court decision in McCleskey v. Kemp established that defendants must prove that the prosecution was “intentionally” discriminatory when challenging racial bias in their legal process. This decision set a nearly impossible-to-meet standard of proof. In addition to prohibiting the use of race in convictions and sentencing, the CA Racial Justice Act also seeks to create a system for defendants to challenge alleged racial bias at trial or after a conviction.

A bill from Senator Nancy Skinner (D-Berkeley), SB 773, aims to “reimagine policing and how we respond to community needs” by creating space for changes to the 911 system.

The bill would make it possible for California’s 911 Advisory Board to recommend revisions to 911 systems at the local level that would allow dispatchers to divert non-violent calls related to mental health, homelessness, and other needs better met by social services, away from an armed police response.

The Los Angeles County Board of Supervisors also recently took action to explore changes to 911 and emergency response, calling on the Department of Mental Health to come up with ideas for either a crisis response phone number separate from 911, or a way to triage and divert calls within the 911 system, that would send non-law enforcement teams to answer health and human services calls, rather than armed officers.

In an effort to reduce racist 911 calls, Asm. Reggie Jones-Sawyer (D-Los Angeles) introduced AB 1775, a bill that will make it a hate crime to make a bogus 911 call based on a person’s actual or perceived race, ethnicity, gender, immigration status, disability, or other characteristic listed in the Ralph Civil Rights Act of 1976.

Beginning on January 1, 2019, SB 1421 made records related to police misconduct and serious and fatal uses of force available to the media and the public via California Public Records Act requests.

A second bill from Sen. Skinner, SB 776, aims to build off of 2018’s SB 1421, by further increasing public access to long-hidden police records.

SB 1421 granted the public access to personnel records of officers who are found to have been dishonest in the “reporting, investigation, or prosecution of a crime.” Until last year, even prosecutors had been barred from accessing personnel records that may have impacted their cases, even for officers with a history of lying in police reports or planting evidence.

The secrecy surrounding police misconduct was supposed to have cracked open with the passage of SB 1421, but police officials across the state have spent the last year and a half resisting the new law, challenging the bill and its retroactivity in court, and physically shredding documents they didn’t want to make public, in order to protect officers.

Skinner’s 2020 bill, SB 776, would, for the first time in 40 years, allow the public to access files related to officers engaging in biased or discriminatory behavior on the job.

The bill would also get rid of the “requirement that a complaint relating to sexual assault or dishonesty be found to be sustained following an investigation in order to be subject to disclosure.”

For law enforcement agencies that refused to turn over requested records within 30 days, a $1,000-per-day civil fine would also be imposed under SB 776.

It would also abolish a rule allowing police agencies to destroy personnel records five years after an officer has left the force. Law enforcement officials would be required to keep all complaints in their possession.

“Californians have the right to know who is patrolling our streets and who is given the authority to enforce our laws,” Skinner said. “With expanded public access to police misconduct, SB 776 sends a clear message that racist, discriminatory, and abusive officers are not welcomed in our communities.”