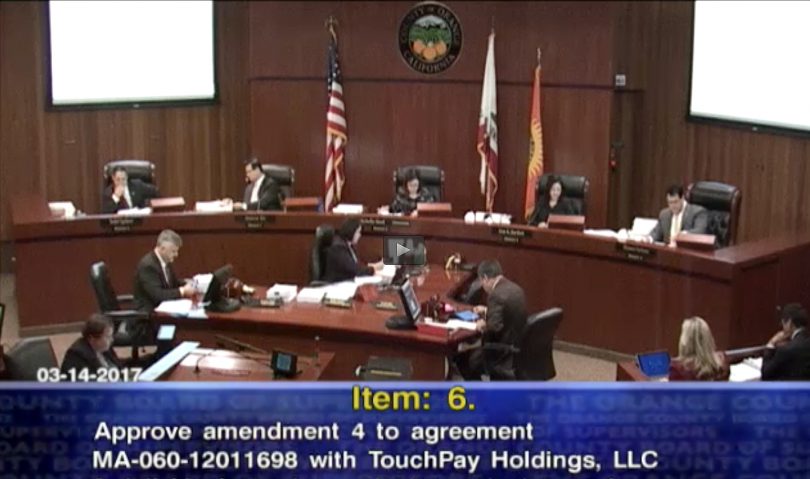 The Orange County Board of Supervisors voted Tuesday to drop a contract with TouchPay Holdings, a subsidiary of Global Tel*Link that provides financial services to jail inmates and their families via kiosks and an online payment system. TouchPay’s excessive fees include an $8 charge to deposit $50.01 into an inmate’s commissary, and 5% to 8% plus a $10 service fee to process bail payments.

Global Tel*Link has been hit with quite a bit of negative attention (and lawsuits) in recent years for charging usurious rates for phone calls from jails and prisons.

Outsized fees for phone calls, financial services, and other corrections-related products can be a significant financial burden to families of inmates and a barrier to family connection.

Last year, Supervisors Shawn Nelson and Andrew Do introduced a motion to end the county’s contract with TouchPay, but their motion fell one vote short of passing. At that time, Supe. Nelson urged the Orange County Sheriff’s Department to explore alternatives to contracting with TouchPay for financial services.

On Tuesday, a sheriff’s department representative told the board that the department had done nothing in the past year to fulfill Nelson’s request.

Nelson was visibly perturbed by the lack of action on the part of the OCSD. Noting that each of his fellow supervisors had at some point purchased goods or services online, Nelson asked, “Can you imagine paying a 20% surcharge to buy anything?”

Nelson said he’d heard from many people in his district that “between the phone system and just trying to put money on their books—those people get slapped around by this stuff.” It’s the family members, not the inmates themselves, who pay the price, the supervisor explained.

“When it gets down to 15 to 18% to deposit money onto peoples’ books, I don’t find that acceptable,” Do said.

Supe. Do pointed out that if a person came in with $10,000 in cash for bail—the lowest bail amount for a low-level felony, according to Do—that person would incur a $510 fee on top of the bail payment.

And all fees collected go directly to TouchPay. Orange County does not make money off of the transactions.

Supervisor Lisa Bartlett, the lone dissenter, argued in favor of renewing the contract on a month-to-month basis in order to give Global Tel*Link an opportunity to reduce their rates and retain the contract. Bartlett expressed concern that cutting off the electronic payment service altogether would cause problems for families for whom traveling to the jail to conduct financial transactions is difficult. (Currently, there are several days each week in which, for several of hours, families can conduct financial transactions in-person at the jails without incurring the TouchPay transaction fees.)

In response, Supervisor Todd Spitzer argued that dropping the contract altogether (rather than renewing month-to-month) would put real pressure on Global Tel*Link to renegotiate.

“The leverage we have today is saying, ‘No. We’re not renewing it. And until you come back with a [fee] schedule that is fare and equitable—that has cost recovery but isn’t punitive—we don’t want to talk to you,'” Spitzer said.

Since the contract was not approved, when the contract expires this week on March 20, family members will go back to having to drive to the jails to conduct transactions, albeit without the associated TouchPay fees.