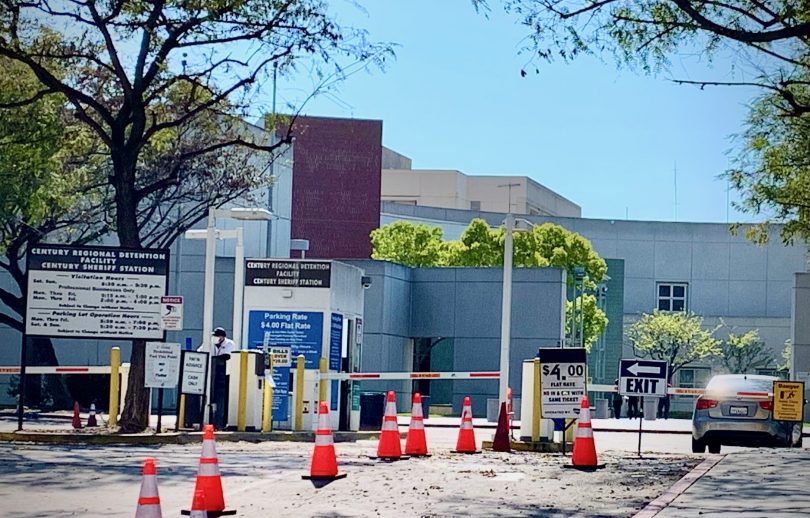 Since 2018, at the behest of the Los Angeles County Board of Supervisors, Inspector General Max Huntsman has monitored the living conditions and services offered to pregnant people inside the county’s women’s jail, the Century Regional Detention Facility (CRDF), in Lynwood.

In his latest report, which covered the final quarter of 2021, Huntsman said he “received complaints from pregnant people in custody and their loved ones” about food and bottled water availability in jail, as well as out-of-cell time for exercise, and other issues.

The number of pregnant people in jail fluctuated between 12 and 36 during the final three months of 2021. On October 15, 2021, Huntsman noted, there were 31 pregnant people in CRDF. That number dropped to 15 individuals on December 30, 2021, the latest count for that period.

These numbers would likely have been lower, if the county’s Office of Diversion and Reentry (ODR) had not reached an LA County CEO-imposed population cap last April for its housing-focused programs.

Among those programs is the Maternal Health Diversion (MHD) program, which works to get pregnant folks out of jail and into permanent supportive housing with their kids.

Last year, WitnessLA published a series about MHD, the mothers the program serves, and challenges that must be overcome before ODR can take on more diversion participants.

Huntsman, in his new report, urged the LA County Sheriff’s Department (LASD) to both drastically reduce the number of pregnant people in custody, and to ensure CRDF staff are meeting the prenatal needs of those who remain incarcerated.

As the inspector general and his team worked to prepare the first report back to the board on conditions for pregnant people in CRDF in 2018, the office heard complaints from incarcerated people about the taste of the water coming out of sinks and drinking fountains. The sheriff’s department said that water quality tests showed clean, drinkable water was coming out of the pipes. Yet, the jail was also experiencing a fly infestation in sink drains. LASD leaders worked to fix the issue, cleaning and treating the drains.

To address the concern that the jail’s pregnant population might still perceive the water as contaminated and choose not to drink it, the sheriff’s department also began serving four 16.9-ounce bottles of water per day along with prenatal diets. That number later increased to six bottles of water, two at each meal, after further complaints that the amount of water often felt insufficient, and that sometimes women did not get all four bottles, anyway.

One mother, Bernadette Campos, who spent over a month in CRDF while pregnant before she was released in January 2020, told WitnessLA she often wanted more than six bottles of water to drink throughout the day. If she ran out of her allocated amount, she would have no choice but to drink the tap water, or remain thirsty until her next meal.

The jail’s prenatal meals are planned so that a specific daily caloric goal is achieved. In the OIG’s latest report, pregnant people said they worried that they were eating too much bread to hit the higher calorie mark, and too few fruits and vegetables.

“CRDF dietitians and the Director of Women’s Health report that the Sheriff’s Department makes every effort to meet the calorie and nutrition requirements for each meal but explained that supply chain issues in recent months have required them to make substitutions that may have less nutritional value,” the report stated. “The Sheriff’s Department also cites staffing shortages as impacting food services operations and resulting in fewer hot meals being served.”

In response, Huntsman called on the sheriff’s department to figure out how to provide “nutritionally balanced meals regardless of staffing, supply chain, COVID-19, or other limitations.” The department should serve pregnant people more fresh produce and limit bread in meals to no more than a few slices per day.

Bernadette Campos, whom we interviewed for our Maternal Health Diversion series, said she couldn’t believe some of the food she ate inside CRDF, describing questionably edible bologna and frequent peanut butter and jelly sandwiches.

The county spends so much money on incarceration, she said, “Why can’t you just give us some decent meals? Why can’t you feed us right?”

While pregnant people would occasionally get extra chicken patties in their evening meals, she said, jail trustees would often take that food for themselves. Her food trays would come with two slices of bread, no meat between them. Other mothers WLA spoke with related similar stories of  receiving prenatal meals with missing food.

One day, Campos said, she went a full day without eating.

On court days, Campos explained, you have to get up early to get on the bus by 6:00 a.m. to get to court.

Campos, who threw up frequently during her first trimester, said that on the morning of the day she learned she would be accepted into the Maternal Health Diversion program, she had an awful ride to court.

On the bus, she said, there are no sick bags. You’re chained to your neighbors, and the only place to throw up is on the floor between your feet. So, Campos said, she spent her day in court smelling like vomit.

Upon arrival, she was placed in one of the courthouse lockups incarcerated folks refer to as “the dungeons.” They’re hot, stuffy, and small, and crammed with dozens of people, Campos said.

On the day that her transfer to the diversion program was approved, because of an error on her paperwork, hers was the very last case heard, Campos said. By then, it was about 4:00 in the afternoon.

“When you go to the courts, they feed you one little peanut butter and jelly and a cookie,” she said. “They don’t give you anything to drink.” That day, Campos said she did not think she could get the sandwich down without water, so she left it uneaten. She would wait for dinner, she thought.

Once back on the bus to jail, she said, she continued to throw up, despite an empty stomach.

“They’re supposed to keep our dinner even if we’re on the late bus,” said Campos. But by the time she got back to the jail, “the trustees had already eaten my dinner.”

Campos asked an officer if she could have a cold lunch or something else to eat. “I was hungry,” she said. The officer reportedly told her she would have to wait for breakfast in the morning.

It was a really difficult night, she said, without food or any bottled water since that morning. “My stomach hurt the whole night,” she said, making her fear she might lose the baby.

Not getting enough to eat within a day’s three meals is particularly painful for people who don’t have family members who can send them money for commissary. And commissary items that could supplement one’s diet, like instant soups, Campos said, are often far more expensive in county lockups than in California’s state prisons.

Campos did not have loved ones who could or would send her money for commissary, which impacted more than her diet. She described having to trade stationary for shampoo and soap because the jail did not give adequate hygiene supplies in the small kits provided. When she would ask officers for more personal hygiene supplies, she said the tiny bottles and bars would take a long time to arrive, or never arrive at all.

Out-of-cell time, too, was minimal, according to Campos.

Pregnant people should engage in at least 150 minutes of moderately intense aerobic exercise per week both during and after pregnancy, as outlined in the U.S. Department of Health and Human Services’ Physical Activity Guidelines for Americans.

Bernadette Campos described sitting and lying on the “coffin-like” bottom bunk of a three-tier bunk bed for most of her stay in jail. Her bunk, she said, was in an open dorm-like area, rather than a cell. Officers generally made Campos and her neighbors lie on their bunks or sit on the floor for 23 hours a day, she said. At the start of her one free hour, Campos would hurry, as fast as a pregnant woman could, to get in line for the showers. If she was slow, she might not have enough time.

“You get 23 hours down, one hour out. Somebody messes up, you don’t get a shower,” she said. “You’ve gotta bird bath now. You feel nasty.” Especially, she said, when you’ve had morning sickness, and have been throwing up.

“Out-of-cell time is the only opportunity many people in custody, and pregnant people in this module specifically, have to shower, make phone calls, order commissary, exchange linens, and socialize,” the OIG’s report stated.

The report offered a picture more bleak than what Campos described: out of cell time in the module housing most pregnant women hit just 205 minutes per week between September 1, 2021, through November 30, 2021, according to sheriff’s department data.

That’s an average of less than 30 minutes per day for out-of-cell time.

“Several pregnant people in custody reported that some deputies assigned to their module allowed additional out-of-cell time designated specifically for walking in the ‘outdoor recreation’ area of the module.” Huntsman wrote. The sheriff’s department said faculty were required to offer the extra exercise time, but did not do so consistently. And the inspector general wrote that his office was unaware of efforts to hold anyone accountable for failing to provide adequate out-of-cell time.

Over the week of Christmas, a module with five pregnant people was placed under quarantine, and out of cell time was approximately 25 minutes per day.

“The Sheriff’s Department should immediately begin to hold personnel accountable through its progressive discipline system when they fail to comply with leadership directives regarding out of cell time.”

The issues highlighted in the report, wrote Huntsman, “necessitate the release of pregnant people in custody as a highest Sheriff’s Department priority.”

The sheriff’s department has cited the seriousness of criminal charges and other barriers to increasing releases, including stringent criteria for placement at many community based organizations to which the LASD could transfer certain incarcerated pregnant people to get them out of jail.

Yet, the OIG received a complaint on December 24, 2021 about someone who was 34 weeks pregnant and locked in CRDF for a non-violent offense. When Huntsman’s office requested information about the case, the sheriff’s department revealed that the release process for the individual “had stalled initially due to an error on the part of Sheriff’s personnel.” That person was released on December 30, after being declined by several community-based organizations whose criteria were not met during the six intervening days.

The Office of Diversion and Reentry, which accepts to its Maternal Health Diversion program people who have been accused of more serious crimes, has hit an LA County CEO-prescribed population limit for its housing programs. And, even when the program is in full swing, it can sometimes take months to get someone’s case transferred to ODR’s diversion court judge, and thus, months to get the individual out of jail.

Rather than keeping people who are pregnant in jail, where they are locked down nearly all day, Huntsman calls on the sheriff’s department to “exercise all available avenues and authority to release as many pregnant people in custody as possible.”