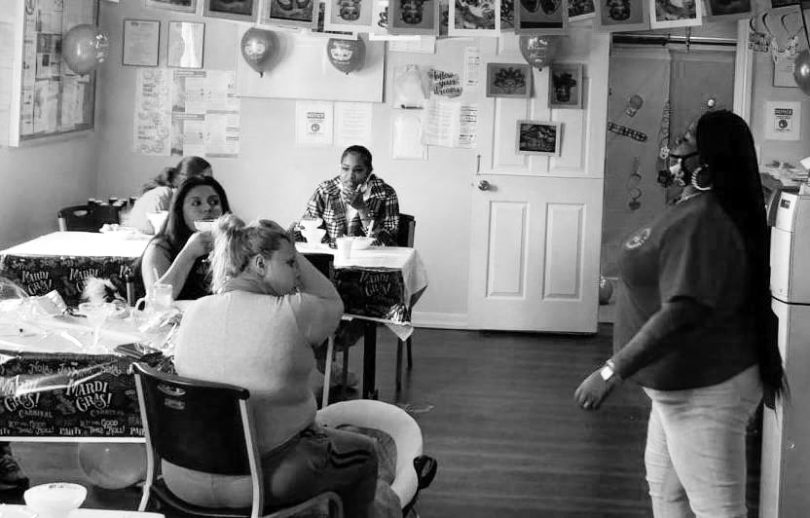 Diverting pregnant people from LA County’s jails is a complex process involving many moving parts and many players — including the diversion court, probation, child welfare, health care clinicians, case managers, housing providers, and the clients themselves.

In the third part of this multi-part series, we look at some of the ways in which the process of diversion can jump the rails.

Los Angeles County’s Maternal Health Diversion Program (MHD) offers many of the county’s incarcerated pregnant people a way out of jail and a path to permanent housing.

Within the Maternal Health Diversion Program, run by LA’s Office of Diversion and Reentry, is a network of supports meant to meet both the basic and more complex needs of clients and their kids.

However, diversion is not a hazard-free journey for those who agree to participate.

Many enter the MHD program with complications beyond being involved in the justice system while pregnant, including mental health diagnoses, chronic homelessness, and problems with substance use.

Moreover, women are not always prepared for the realities of living in congregate housing, sharing bedrooms and bathrooms, and having to follow strict house rules, according to Maternal Health Program Manager Casey Nairin.

The program’s primary housing site, operated by the community-based organization, Holliday’s Helping Hands, is a facility with beds for 29 women, and for the infants of the women who remain in interim housing after their pregnancy ends..

In such close quarters, small disagreements sometimes escalate, and mothers occasionally get into verbal and physical fights with each other.  One former resident of a housing site no longer used for Maternal Health Diversion said she witnessed an incident in which a woman unleashed pepper spray on a housemate, over what the mother/witness described as a minor matter.

Katina Holliday, Founder and CEO of Holliday’s Helping Hands, said that her monthly staff training sessions include deescalation practices, and that ODR conducts its own annual deescalation training with the staff of HHH to ensure they’re prepared to respond to any conflicts that arise in the home.

The issue of drugs

Beyond the interpersonal issues that occur within the congregate setting, other problems loom. Among those problems is the fact that many of the mothers in the diversion program have a history of substance use disorder. Some candidates agree to diversion, but have trouble remaining sober once housed.

Some of those struggling with substance use may sneak drugs into the housing, several diversion participants told WLA.

HHH staff conducts both regular drug searches — including when the women return to the housing after appointments, errands, and work — and random drug searches. But drugs still sometimes find their way into the facility.

In at least one instance, a mother who did not previously use drugs became addicted to meth after another resident began using drugs at the house, according to Chapawnie Forbes, a former case manager with Project 180, the community-based organization that provides case management for Maternal Health Diversion.

“That’s happening at some of our other housing,” Casey Nairin said. “It’s really hard to avoid, as you could probably imagine, in these congregate settings.”

The mother, who had a young son when she entered the program, said she was concerned about having her little boy living around drugs. She also worried, she said, that her  housemates’ drug use would impact her own child welfare case. If social workers came to check up on her in the interim housing and saw evidence of substance use, she feared she might not regain custody.

She was also concerned about birthing her second child while in interim housing.

“I can’t have my baby here,” the mother recalled thinking at the time. She said she began looking for independent housing every day, and was in her own apartment by the time she gave birth.

In hindsight, the mother said she wished that ODR officials and case managers assigned to work with the women visited the housing sites more frequently, so that they’d have been more likely to spot these issues.

Katina Holliday stressed that her staff was trained to respond to drugs in the housing using a non-judgemental, harm-reduction approach.

When HHH catches residents with drugs, Holliday said, “we take the drugs, and we dispose of them.”

HHH staff must then notify the Project 180 case manager of the individual involved, as well as the person’s probation officer, and also ODR. Drug treatment is usually the path forward in these cases, said Holliday.

Depending on the circumstances, Holliday explained, ODR and Project 180 most often respond to instances of drug use by sending participants to in-patient or out-patient treatment programs.

ODR does not send mothers back to jail just for relapsing, said Holliday. That would defeat the purpose of the program.

At the same time, HHH workers are mandated reporters and must call the Department of Children and Family Services when a mother’s actions are deemed to endanger her child or constitute serious neglect.

But Holliday said that she also strongly advocates on behalf of mothers in her care when a temporary setback might mean a mother loses her child. In those cases, Holliday will prepare before DCFS gets there, so that she can tell social workers that, for example, the mother has agreed to drug treatment and that the child’s grandmother has agreed to take the child in the meantime.

“I have done that about four times already where I’ve intervened, and then the kids were not taken away,” Holliday said. “If you have a plan when [child welfare workers] come out,” she said, they’re less likely to place the child in foster care.

When kids are taken from their mothers and placed in foster care, the kids are traumatized and the moms often “spiral,” those who work in the diversion program and the mother/participants told WLA.

One problem, according to former case manager Chapawnie Forbes, was that HHH would “frequently” ignore protocol, handling instances of drug use quietly in-house, leaving a resident’s case manager in the dark for days.

Sometimes, problems are also made harder to solve, according to Casey Nairin, head of MHD, by the fact that an individual participant’s system of care includes representatives from numerous organizations.

“At any given time, there are maybe nine clinicians working on one case,” Nairin said. “Oftentimes, that’s really helpful. But, at the same time, there are a lot of hands in the pot.”

It’s imperative, she said, to “make sure that all of the hands are working together.”

Some of the mothers WLA spoke with suggested that establishing different tiers of housing based on clients’ needs and circumstances could be a way to improve the diversion system. This might involve separate accommodations for mothers struggling with substance use, and special housing for mothers with acute mental health needs.

Nairin told WLA she had recently begun implementing a similar strategy that involves moving people who were no longer pregnant and who did not have a baby — either because they miscarried or had an abortion — out of the maternal health housing and into other ODR housing.

Maternal Health participants “who are not pregnant at the moment, or don’t have babies to fight for,” Nairin said, sometimes lose the motivation to remain sober and to prioritize completing the terms of their probation. “Pregnancy really motivates women to change dramatically,” she said.

Many of the diversion participants easily complete the basic activities of daily living, said Nairin. These women go to their appointments on their own, and some have jobs.

But there are women who are not as prepared to take on new responsibilities, and who need extra support.

“I think what I’ve learned,” Nairin said after a meeting with housing staff, “is that Holliday’s Helping Hands is not as familiar with dealing with the very sick pregnant women.” HHH staff may see these women, Nairin said, as “disrupting the flow of the community.”

The Office of Diversion and Reentry, Nairin said, is looking for a way to establish and run its own interim housing that is specifically designed as a sober living environment for those who need additional support around substance use.

More ODR-run housing will, of course, require a substantial investment from LA County. And, at the moment, the funding currently flowing to ODR for its various diversion programs is only sufficient to pull those programs back from the cliff’s edge, not to expand them. And expansion is urgently needed.

Funding woes and a housing population cap of 2,200 people — which ODR reached in April, and which was imposed by LA County’s CEO — have meant that the flow of people out of LA’s jails and into diversion has slowed to a trickle in recent months.

In the final part of this series, we’ll take a closer look at the uncertain funding and future of ODR and its Maternal Health Diversion Program.

This series by WitnessLA’s assistant editor, Taylor Walker, was produced as project for the USC Annenberg Center for Health Journalism’s 2021 California Fellowship.

Corrections: This story originally identified Casey Nairin as the director of the Maternal Health Diversion Program. To clarify, while Nairin does lead the program, her title is Maternal Health Program Manager. Additionally, while we identified Chapawnie Forbes as a former employee of Project 180 in Part 2 of this series, the original version of Part 3 did not identify Forbes’s former workplace.