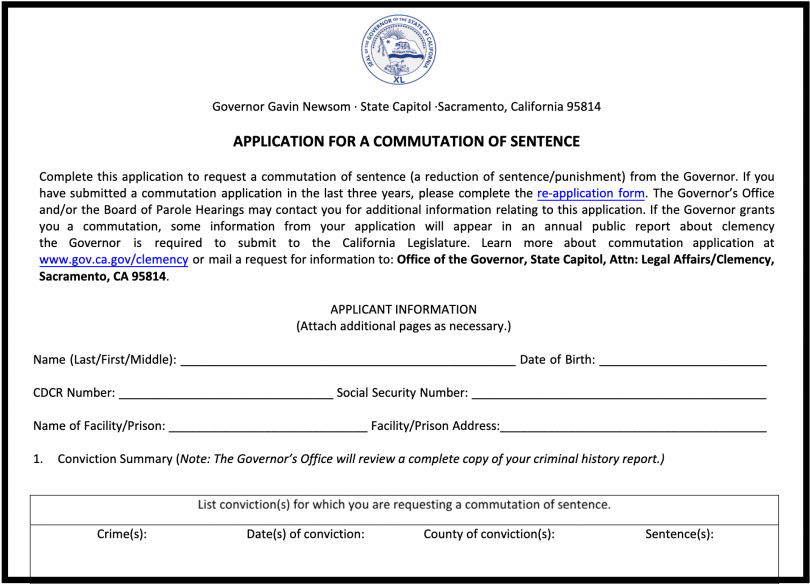 On Wednesday, the ACLU announced the launch of a campaign to push governors across the country to use acts of clemency to free 50,000 of the 1.3 million people in state prisons. The mission is especially timely, as prisons in California and many other states have become hotbeds of coronavirus infection, threatening the lives of incarcerated people, the overwhelming majority of whom were not sentenced to die in prison.

The campaign’s first priority will be people locked up for technical probation or parole violations, elderly prisoners, people who are serving harsher sentences than they would receive if they were sentenced for the same crime today, and people convicted of drug possession and distribution crimes.

“The criminal laws that fuel this crisis were all the product of a governor’s signature,” the ACLU’s report states. “A stroke of a pen brought legislation to life and put it into practice. Governors can use that same authority to remedy the crisis.”

In 1998, when he was 21 years old, Jason Hernandez received a life-without-parole sentence, plus 320 years for drug offenses that he says occurred primarily in his teens. While Hernandez’s case is an extreme example, there are many more people still serving outdated “tough-on-crime”-era drug sentences they wouldn’t have received if sentenced today.

In an essay published alongside the ACLU’s clemency report, Hernandez talks about redemption and mercy, which came in the form of a commutation from then-President Barack Obama. At the time, Hernandez said, there had been only one other person serving LWOP who had been granted clemency. (Obama ultimately granted 1,715 commutations and 212 pardons during his eight years in office.)

“I am just one of the thousands upon thousands of people who after years or even decades in prison, have matured and changed their way of thinking,” Hernandez writes.
Another, more widely known instance of urgently needed, and ultimately achieved clemency, occurred in the case of Cyntoia Brown, who as a 16-year-old victim of sex trafficking, killed a john she believed to be reaching for a gun to shoot her. (In California, Sara Kruzan had a strikingly similar story of abuse and trafficking followed by retraumatization from the criminal justice system, then years of litigation and, finally, a commutation that freed her from prison.)

In a second essay, Preston Shipp, the prosecutor who secured a sentence of 51 years in prison for Brown, discusses his shift in perspective that led him to understand the adversarial and dehumanizing nature of the criminal justice system, and to fight for Brown’s early release.

“After you have done your job and obtained a conviction, and had the person sentenced, you may as well forget that their story had a beginning and a middle, seeing only an end — a resolution you helped fashion for them,” says Shipp. “You therefore often forget the impact you had in that person’s life, which will long outlast the time you spent prosecuting their case.” Yet clemency offers governors an opportunity “to undo the failures and harms of the system and see people not merely for what they have done, but for who they have become.”

“Clemency corrected the injustice of a 16-year-old child being tried as an adult and sentenced to 51 years in prison,” Shipp writes. “The system needs more of that change, and it needs it now.”

Governors and the president have the power to grant two forms of clemency – pardons, which wipe a person’s record clean and restore their rights, and commutations, which shorten a person’s prison sentence.

Here in California, Governor Gavin Newsom has reviewed and granted some clemency petitions but has not increased output during the pandemic. (In response, those with incarcerated loved ones and other community members have gathered outside of Newsom’s house to protest his inaction. At the end of July, protestors were arrested after chaining themselves to the governor’s gate.)

Over more than a year and a half in office, nearly five months of which has occurred amid a pandemic, Newsom has issued 41 pardons and 65 commutations (as of his latest batch in June).

(For comparison, in 2011, during his first year of his second stint as California’s governor, Jerry Brown pardoned 21 people, and granted no commutations. In 2012, Brown pardoned 128 people and commuted one sentence.)

“[D]ecades of punitive policies” have “deliberately targeted Black and Brown people,” the ACLU report says. “Clemency is an opportunity to reexamine those cases and free people who should not be imprisoned. Correcting these prior injustices by liberating people who have spent years or even decades in prison is a critical step we can take toward racial justice and healing.”