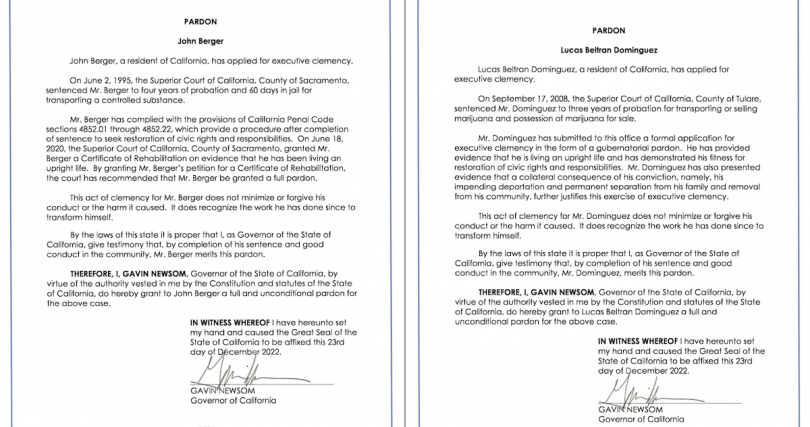 Between 2000 and 2004, one clemency recipient, Santiago Lopez, was sentenced to 113-days in jail, 3 years of probation, and 3 years in prison, for several marijuana convictions and possession of a controlled substance for sale.

Pardoning a handful of old marijuana convictions here and there is nowhere near enough, according to the nonprofit Last Prisoner Project, which is focused on ending imprisonment for the “tens of thousands of individuals still unjustly imprisoned for cannabis” in the United States.

“While we are grateful @GavinNewsom has used his clemency power to pardon two individuals convicted of marijuana offenses, there are thousands of people in California whose cannabis convictions should be completely expunged,” the organization said on Twitter. “California is now the largest legal market on the planet, and it is unconscionable that so many are still suffering the collateral consequences of these convictions.”

On November 21, 2022, outgoing Oregon Governor Kate Brown pardoned all convictions for simple possession of one ounce or less of cannabis in which possession was the only charge in the case. The move impacted 45,000 people and resulted in the expungement of approximately $14 million in unpaid fines and fees, according to Brown’s office.

California lawmakers have taken steps in recent years to increase marijuana record-clearing, but some counties have been slow to process what are supposed to be automatic expungements.

In 2019, AB 1793 was supposed to result in the automatic reclassification or expungement of past marijuana-related convictions from the records of Californians eligible for relief under Proposition 64 (which legalized recreational marijuana), rather than require them to submit petitions for the changes to occur.

In January 2022, an LA Times investigation found that at least 34,000 eligible marijana records had not been cleared. Because the courts were given no deadline, some jurisdictions had not processed a single case. In San Bernardino and Riverside Counties, for example, there were approximately 5,400 and 21,000 cases waiting to be processed.

This should change in the coming months. In response to the Times investigation, lawmakers wrote and Newsom signed a bill to give courts a March 1, 2023 deadline to dismiss or reclassify the remaining eligible cannabis convictions.

Clearing old convictions via legislation en masse or through the clemency process is critically important for the individuals living with the collateral consequences of those convictions.

People with criminal convictions must contend with thousands of legal restrictions that often make life far more challenging. These lingering marks on criminal records can keep people from being able to access housing, professional licenses and employment, and education. Old convictions can also result in deportation.

In his December 23 pardon certificate for Lucas Beltran Dominguez, a man convicted of cannabis crimes in 2008, Governor Newsom noted that Dominguez was facing deportation — “permanent separation from his family and removal from his community.”  The risk of deportation, Newsom said, “further justifies this exercise of executive clemency” for a man who has provided evidence that he is “living an upright life.”

Including this last batch of pardons, Newsom has granted 140 pardons, 123 commutations, and 35 reprieves.

A governor-issued reprieve usually allows a person to serve their sentence in a community-based placement. This option is generally used in emergent medical situations, and can be revoked at any time. Many of Newsom’s reprieves were issued to people at a high risk of death should they become infected with COVID-19.

In the eight years before Newsom took office, then-governor Jerry Brown issued the most pardons of any governor in at least the last 75 years. Between 2011-2018, Brown granted 1,332 pardons and 283 commutations.

In four years, Governor Newsom has granted a little less than half the number of commutations that Brown did in eight years, and just over 1/10 the number of pardons.

In 2019, a year in which Newsom issued 22 pardons and 23 commutations, the governor claimed that placing a moratorium on the death penalty counted as granting reprieves to the 737 people on death row at the time. (That number has since dropped to 674, as of December 7, 2022, according to the California Department of Corrections and Rehabilitation.)

Those de facto reprieves won’t last beyond Newsom’s tenure as California’s governor, however.

In addition to pardoning thousands of marijuana convictions this year, Oregon’s governor, Kate Brown, commuted the sentences of everyone on Oregon’s death row, downgrading 17 death sentences to life-without-parole.

In response to the news, Newsom said commuting the state’s death sentences is an option his office has thought about, CalMatters’ Alexei Koseff reported. “It’s more complicated in California, for many different reasons, but it’s something that’s long been considered,” Newsom said.