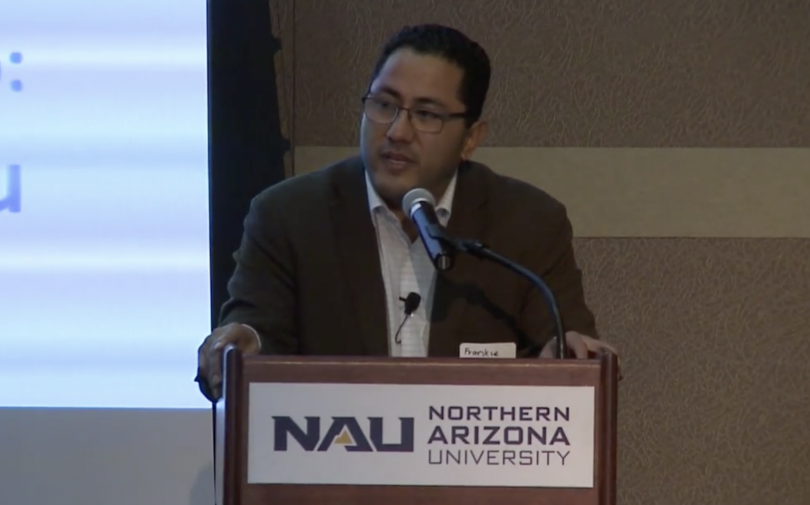 By Stephanie Miceli
The National Academies of Sciences, Engineering, and Medicine

Every year in the United States, nearly 250,000 youths are tried, sentenced, or incarcerated as adults.

Though the age limit for juvenile court varies from state to state, the cutoff age in most jurisdictions is 18. Frankie Guzman, a lawyer at the National Center for Youth Law who directs its California Youth Justice Initiative and who was incarcerated himself as a youth, calls this cutoff “arbitrary,” because the adolescent brain continues to develop well into one’s 20s.

“It is immoral and unethical to incarcerate children — especially in a system that offers very little in the way of developmentally appropriate services,” said Guzman at a recent workshop of the National Academies of Sciences, Engineering, and Medicine, organized by the Roundtable on the Promotion of Health Equity. The workshop examined the effects of involvement with the juvenile justice system on the health and well-being of adolescents, families, and communities of color.

The intersection of race and place

Communities with high rates of youth incarceration usually have several things in common: poverty, failing schools, inadequate health care, inadequate housing, and negative relationships between police and residents. Much of this burden falls on communities of color and poor communities.

When Guzman was 15, he and a friend stole a car and robbed a liquor store at gunpoint in Southern California, which resulted in six years behind bars. His incarceration was the culmination of many of those aforementioned factors, including financial difficulty, a lack of enrichment opportunities, and few adult role models in a community marred by gang violence.

“In my community, there were no after-school programs, no Boys and Girls Clubs,” said Guzman. “I was stopped and strip-searched in broad daylight as early as age 13, when all I was doing was existing.”

People tend to focus on what punishment a person deserves, rather than what led them to prison in the first place, which was a common theme discussed throughout the workshop.

“Young people are detained by the juvenile justice systems when other systems fail,” said Linda Teplin, director of the health disparities and public policy program at Northwestern University. Evidence also shows that the majority of kids who are in youth detention have experienced trauma and other behavioral health issues, and that punishment-based systems don’t necessarily work to rehabilitate them.

Several attendees remarked that the criminal justice system has become a catch-all for dealing with problems caused by society’s underinvestment in people.

“We always hear funding for prevention is an issue, but how much does it cost for someone’s incarceration? When I was in San Quentin State Prison, it was $120,000 a year,” said Airto Morales, a site manager at the W. Haywood Burns Institute for Justice Fairness and Equity. “I wasn’t worth that much on the street before, or even when I was in the military. We need to address these dichotomies,” he said.

The workshop featured a panel of formerly incarcerated young people and their parents, who all stressed that those who are directly affected by the problem need to be part of the solution.

If detention is expected to be the answer, the system has to “do more than lock kids up. It has to reach into the lives of kids and their parents,” said Deanna, the mother of a son who was incarcerated.

Some cities are piloting the concept of “credible messengers,” mainly people who were formerly incarcerated who are given a living wage salary and benefits and hired to be mentors, life coaches, and case managers of young people ages 16 to 24 who are on probation. In Washington, D.C., the approach has extended to include probationers’ families.

There has been pushback from some, who say “you’re bringing in felons to tell us how we’re supposed to serve these young people.” However, Guzman applauds such approaches, noting that in his role, “as a formerly incarcerated person, I still chose to engage with a system that did a lot of harm to me and my community. I wanted to be part of the solution, not relegated to the sidelines.”

Opportunities to reform the juvenile justice system are abundant, and states and counties can learn a lot from tribes, said Richard Blake, chief judge of the Hoopa Valley Tribe in California. Blake has launched culturally tailored programs for anger management, substance abuse, and domestic violence. In response to the “school-to-court-pipeline,” he also placed resource officers in schools to be a first line of defense for students with behavioral problems — rather than the court system.

Guzman noted that San Francisco is closing its youth detention center in 2021 — a move he hopes other cities will follow. The next big question, he said, should be about whether youth-serving county agencies will more appropriately serve young people on probation.

Ultimately, speakers agreed, the conversation about youth incarceration needs to shift from punishment to hope and healing. Most young people in prison are there for things they genuinely regret doing — not because they got in trouble, but because they want to make things right.

“We have to all work toward the same goal — to restore justice,” Blake said.

The National Academies of Sciences, Engineering, and Medicine (NASEM) originally published this story.