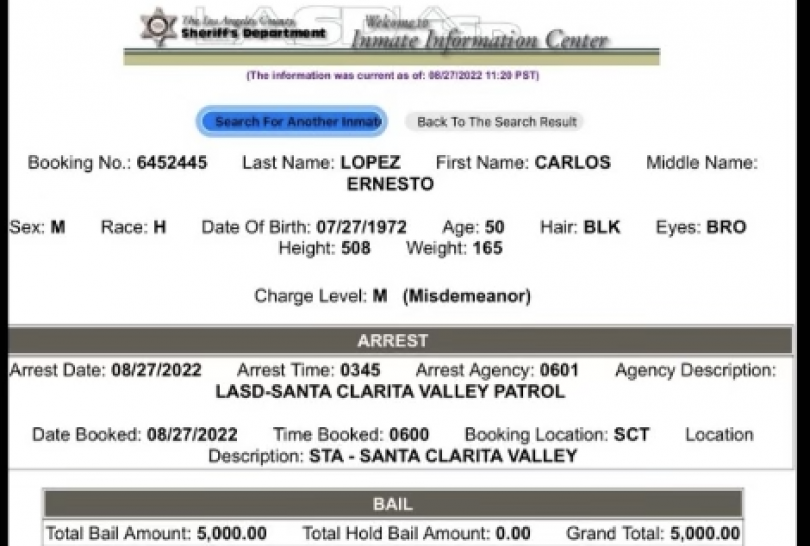 The Santa Clarita Valley Signal was first to break the news on Friday night that a Los Angeles County sheriff’s deputy crashed his department SUV into some bushes in the area of Stevenson Ranch, then managed to vanish from the scene before first responders arrived.

The deputy, whose name is Carlos Lopez, was later found at his home which is reportedly roughly a mile from the scene

The Signal’s Trevor Morgan also reported that the 50-year-old Lopez, had reportedly been “assisted by someone else before leaving the scene with apparently minor injuries,” according to a witness.

The someone else would later be reported to be another department member.

Meanwhile there was mostly silence from the LASD about the alleged drunk driving deputy vanishing from a crash scene. (The crash involved only the single vehicle.)

Finally late Saturday afternoon, the sheriff’s department—and also Sheriff Villanueva—released a statement saying that they were “…aware of the deputy who was involved in a solo vehicle traffic collision last night on Pico Canyon Road / Southern Oaks Drive in Stevenson’s Ranch.”

The deputy, who had crashed into some bushes around 9:30 p.m. Friday, was located and was arrested for suspicion of “driving while under the influence of alcohol.”

He was subsequently “transported to the Henry Mayo Hospital ‘for evaluation,’ where it was determined he did not sustain any significant injuries” from the solo-vehicle traffic accident. “The deputy has been relieved of duty,” stated the department and the sheriff.

Lopez was booked earlier on Saturday afternoon, on a misdemeanor charge.

The deputy in question, it turns out, works in the the LA County Sheriff’s Special Enforcement Bureau (SEB), a specialized unit that includes the department’s well-regarded “High-Risk Tactical/Rescue Teams.”

Two department sources we spoke with were particularly critical of Lopez for not merely leaving his SUV following the allegedly alcohol-fueled crash, but also reportedly leaving behind his gun, phone, and SWAT gear when he exited his vehicle.

And, on a largely unrelated note, one of our sources said that, in an earlier part of his career with the department, Lopez worked at the LASD’s Lennox station, which at the time was reportedly controlled to a great degree by the deputy clique known as the Grim Reapers.

At first we heard only that Lopez hung around with the Reapers. We could not confirm whether or not Lopez ever officially got “inked.”

We have since confirmed that he was indeed an inked member.

Of course, whether or not Lopez was a member of one of department’s notorious deputy gangs, has nothing to do with the alleged single-person DUI crash.

Yet, since we’re spending a lot of time at the moment examining the corrosive affect of these groups with their violent iconography, and which generally exclude others from membership based on race and/or gender, the reported Grim Reapers connection seemed, at least, worth mentioning in passing.

Meanwhile, in other SEB news, on Sunday morning, in the Angeles forest, LASD’s Air Rescue 5 landed on Angeles Crest Highway near to Newcomb’s Ranch, in order to assist with a vehicle collision, where they deployed LASD SEB Tactical Medics.

Air Rescue 5 airlifted two of the crash victims to a trauma center.