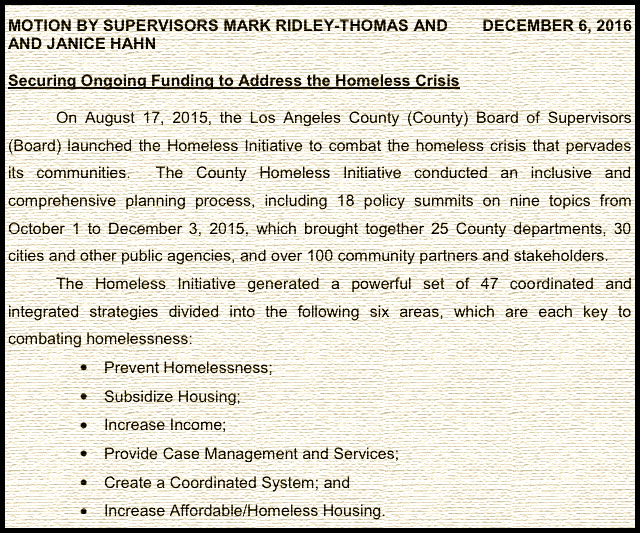 On Tuesday, the LA County Board of Supervisors passed several important motions—two aiming to help the county tackle its homelessness crisis, and another to protect the county’s immigrant community from potential rights-violating actions taken by the Trump administration.

The supervisors’ Tuesday meeting included its two newest board members, Kathryn Barger and Janice Hahn. The addition of Hahn and Barger, who were sworn in on Monday, created the board’s first ever supermajority of women.

The board approved a motion from Supervisors Mark Ridley-Thomas and Kathryn Barger to declare homelessness an emergency in LA County.

“The County of Los Angeles is facing a grave public emergency, the
pervasive and deepening homeless crisis, which currently endangers the health and safety of tens of thousands of residents, including veterans, women, children, LGBTQ youth, persons with disabilities and seniors,” the motion reads. “The tremendous scale of homelessness in the County threatens the economic stability of the region by burdening emergency medical services and the social services infrastructure.”

The supes voted back in June to urge Sacramento to declare homelessness a state of emergency (and thus worthy of additional state funding and attention)—a push led by Ridley-Thomas. The next day, Gov. Brown announced that he would not make the move. The governor’s press secretary said the issue of addressing homelessness is a task for local governments. (The state Assembly, local officials throughout California, and more than 25,000 petitioners later joined the call for the governor to act.)

While Brown has refused to declare a state of emergency over homelessness, the governor did sign budget bill AB 1628, which officially authorizes the state to issue up to $2 billion in bonds to fund permanent supportive housing for chronically homeless people suffering from mental illness.

The Supes unanimously approved a second motion from Ridley-Thomas and Janice Hahn to put a ballot measure before voters that would fund homelessness prevention measures via a county-wide 1/4-cent sales tax increase.

If approved by 2/3 of voters on March 7, the tax increase would raise $355 million annually over the next decade.

There are more than 3,400 young homeless people between the ages of 18 and 24 in LA County, (excluding Long Beach, Glendale, and Pasadena) according to the 2016 homeless count.

“All around us, we find human beings living in utter squalor – a shocking number of them families with children,” Ridley-Thomas said. “With this historic vote, we are taking a bold step towards ending this humanitarian crisis, the defining civic issue of our time.”

It will take an estimated $450 million a year in services funding to really make a difference in the county’s homelessness crisis, according to . The tax would fund rental subsidies, mental health and substance abuse treatments, subsidized healthcare, and other much-needed services.

“This is the time to act to provide a dedicated revenue stream to begin to address the incredible crisis that we have with 47,000 people sleeping on our streets,” added Supervisor Janice Hahn.

In August, LA County Sheriff Jim McDonnell announced that sheriff’s deputies would soon be instructed to refrain from arresting homeless people for minor crimes related to homelessness. Instead, the goal for deputies will be to connect homeless people with much-needed services. The department’s decriminalization initiative is expected to go into effect at the beginning of 2017.

Decriminalization of the county’s homeless was one of 47 recommendations in a $100 million comprehensive interagency plan to combat homelessness, which was approved by the LA County Board of Supervisors Back in February.

The Board of Supervisors approved a second motion by Supes Hilda Solis and Sheila Kuehl that calls for an analysis of the feasibility of creating a county Department of Immigrant Affairs to protect the hundreds of thousands of undocumented immigrants living in Los Angeles, in the event that Trump follows through with his promise to deport millions of undocumented immigrants.

The motion directs the CEO to convert the County Deferred Action for Childhood Arrivals (DACA) Task Force into an Immigrant Protection Task Force. The task force’s first job will be to meet with civil and immigrant rights groups to develop and recommend strategies for protecting immigrant residents countywide. The task force will report back to the board within 45 days with its findings, including an analysis of the feasibility of creating a county Department of Immigrant Affairs.

Solis says she received over 45 letters of support for the motion from local non-profits, as well as support from LA Mayor Eric Garcetti, Senate President pro Tem Kevin de León and a number of other California lawmakers.

“This motion marks the first step of many that we will take to defend our immigrant communities and their rights,” said Supervisor Solis. “The goal is to protect immigrants who form a large part of our work force, immigrant children who attend our schools and immigrant taxpayers who play a key role in keeping our economy, government, and society running.”

The Office of Education is directed to analyze the potential impact of Trump’s presidency on students, families, and staff. The motion instructs the Chief Information Officer to report back to the board with information on protecting the identities and data of county residents “who may be adversely affected by Federal policy changes.” County Counsel is directed to analyse the president’s authority to modify current immigration laws and policies, as well as what potential legal ramifications the county faces if it fails to comply with current or future immigration laws, and what legal avenues the county can take to challenge the constitutionality of the immigration policies.

Sheriff McDonnell will also have to report back to the board in 45 days on whether the LASD plans to change any immigration-related policies or practices in the event that Trump follows through with his promise to deport millions of undocumented immigrants.

“Many people in our county are facing new uncertainties in the wake of the presidential election,” Kuehl said. “This makes it even more important for the County to take steps to protect the immigrant populations who came to this country, as my parents’ families did, to work hard and build a better life for their children.”

WitnessLA will have more later on in the week.