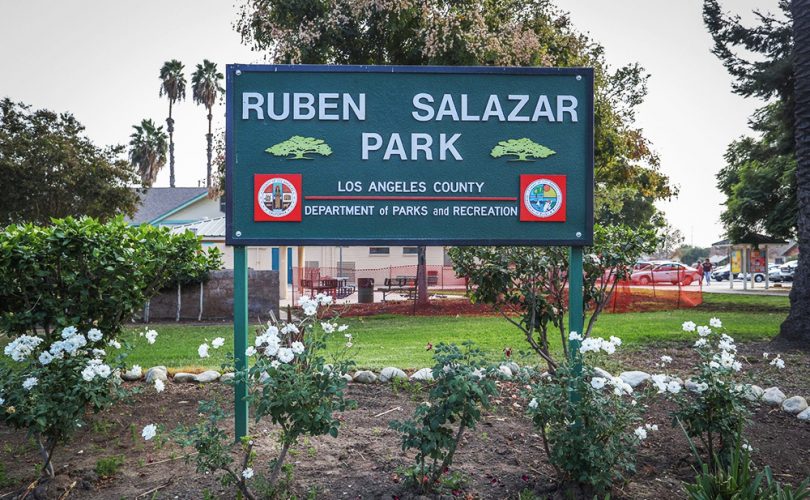 “Remember, these are public lands we’re talking about, no matter what else you call them — owned by every one of us.”   Gary Snyder, poet

Parks are “the breathing spaces for a society that increasingly holds its breath.” Terry Tempest Williams, naturalist & essayist.

“Don’t bother the earth spirit who lives here. She is working on a story. It is the oldest story in the world and it is delicate, changing.  Joy Harjo, U.S. Poet Laureate

For the past few weeks, Los Angeles County Sheriff Alex Villanueva has been fighting with the LA County Board of Supervisors over….county parks.

As readers may remember, earlier this week, at the Tuesday Oct. 13. board meeting,  a motion was up before the board that proposed exploring ways to “enhance and reimagine” community policing in the county parks.

The motion, authored by Supervisor Mark Ridley-Thomas, and Supervisor Janice Hahn was the product of a fight the sheriff picked with the board and the CEO’s office over the county’s budget for FY 2020-2021, in which every LA County agency was forced to take a cut because of the COVID-19 losses the county was experiencing.

The sheriff’s department wasn’t being targeted personally. According to the soon-to-retire CEO, Sachi Hamai, and those working in the office of the new acting CEO, Fesia Davenport, every department was being asked to take a fiscal hit of the same percentage of its budget.

Yet the sheriff contended that the nation’s largest sheriff’s department was being “defunded.”

“This is literally balancing the entire county budget on the back of the LASD,” Sheriff Villanueva wrote of the budget cuts back in July.

He then listed a bunch of units and bureaus that he would have no choice but to “eliminate” if the county didn’t back off with its monetary clipping shears.

Plus….he would have to eliminate the Parks Bureau.

And just to make sure no one missed his point regarding the draconian nature of the cuts he was facing, on the morning of Tuesday, Oct 13, the sheriff sent a letter to each member of the board , explaining why he had to snatch the $23.975 million the board voted to add to the LASD budget, specifically for the department’s Parks Bureau.

The money, according to the sheriff,  needed instead to go toward toward staffing the county’s jails. Otherwise, Villanueva wrote, he would not be able to meet the requirements of the 2015  “settlement agreement” with the Department of Justice.  Nor could he meet the requirements of the 2015 Rosas settlement, based on the class action lawsuit brought by the ACLU, alleging brutality and abuse by deputies in the jails.

And there was a third class-action settlement agreement, this one having to do with the Americans With Disabilities Act, the conditions of which, the department would also no be able to meet, with the current budget.

In addition, the department would have to “eliminate” its ability to provide  security for the urgent care unit and other clinics inside the jails.  Plus there wouldn’t be adequate staff to escort people locked in the jails system to medical appointments.  And so on.

The  list goes on from there for three-and-a-half single-spaced pages.

As it happens, the sheriff’s version of the budget facts is very much at odds with with the CEO’s version.

For example, in a powerpoint report made Thursday of this week at the department’s Civilian Oversight Commission,  Sheila Williams of  the CEO’s office described how all all of the various county agencies were individually asked to make cuts of eight percent from their departmental budgets—the sheriff’s department included.  She also explained that the CEO, together with department members, and outside law enforcement advisors, had worked hard to make sure that the LASD wouldn’t be short of personnel, including in the custody division.  They admittedly took into account that the number of people being held in the county’s jail system was far lower than it had been pre-COVID, even though the numbers were now slightly higher than they had been at their lowest point a few months.

(Why the numbers have climbed somewhat is an entirely different discussion.)

In any case, the bottom line was that, after the county’s FY 2020/2021 supplemental budget was approved on September 29, the LASD’s overall budget totaled $3.582 billion.

Interestingly, the two  members of the sheriff’s department who were present at the COC meeting to discuss the budget, didn’t dispute Williams’ PowerPoint figures and charts. (In fact they thanked her for the presentation, and genially answered questions asked them by the COC commissioners.)

Nevertheless, the sheriff continues not to rewind any part of his decision to spike the Parks Bureau, a move he appears to have made unilaterally without any kind of discussion with County Department of Parks and Recreation (DPR).

All this brings us back to Tuesday’s board meeting, where acting CEO Fesia Davenport , confirmed that Sheriff Villanueva still “seeks to redeploy 107 sworn personnel, and 51 civilian personnel from the Parks Bureau to the custody operations.”

Davenport also confirmed, that the sheriff was not just planning to transfer staff, but planned to also transfer the funding “behind that staff,” namely the nearly $24 million that the board made sure it found in the supplemental budget for the Parks Bureau, which board members considered “a high priority.”

So, could the sheriff legally make that switch in how tens of million of dollars were used, when the board had specifically voted to allocated the$23.975 million to policing the parks?

Actually, no, according to Davenport.  It is “well settled in the law,” she said, that the board has the authority to set the budget for the county’s departments, to “determine the number of staffing positions,” and “to create budget units within each department.”

But “in the eyes of the law,” Davenport continued, who also noted she had checked in detail with County Counsel on these matters, “the sheriff lacks that authority.”

In other words, what Villanueva was doing in expropriating the Parks Bureau cash was not legal.

The sheriff, said Ridley-Thomas, by saying that he will “curtail services” in the parks, “is engaging in  “the kind of intimidation tactics, and irresponsible behavior, that causes too much of the department under this sheriff to be in the state it is in.”  Furthermore,  the board will “not take that intimidation lightly.  We not going to make afraid by such efforts. ”

In addition, Ridley-Thomas told those present at Tuesday’s virtual board meeting, that the LASD had also chosen unaccountably to “defund” youth activity leagues, which gave deputies and neighborhood kids healthy and healing opportunities to interact.

“Some of these children aspire to be law enforcement personnel themselves,” said Ridley Thomas.  “And they need every opportunity to have positive interactions in the context of their own communities, interfacing with those men and women of the department who want to be investors rather than warriors in the community.”

In the end, The Ridley-Thomas/Hahn motion that authorizes the Acting Chief Executive Officer and the Director of the Department of Parks and Recreation (DPR) to address the resulting gap in public safety services caused by the sheriff’s threat to close the Parks Services Bureau, and report back with alternative solutions, “including the implementation of alternative crisis response staffing,” was passed unanimously.

As we wrote earlier in the week, Los Angeles County has one of the largest locally-operated public parks systems in the nation, consisting of a variety of regional and smaller neighborhood community parks, plus nature centers, arboreta, gardens, a few golf courses, a skateboarding park,  and more.

It is also a system of parks that is critical to the quality of life of millions of county residents, many of whom don’t have regular access to green space, except via the nearest county park.

This is particularly true during our present COVID-haunted months that keep many kids away from school, and school playgrounds and sports.

As we explained in our earlier story, for the last eleven years, the LA County Sheriff’s Department has provided community policing services at many of LA County’s Park through its Parks Services Bureau.

In the future, it appears, park safety will be provided a different way.

“As the board continues along the Care First, Jail Last path,” said Supervisor Hilda Solis before the vote, and as the board moves “forward to alternatives to 911 calls,” and other violence prevention strategies, “a thoughtful discussion on reimagining public safety, in parks, is necessary.”

Ridley-Thomas made a similar statement a few days after the vote.

“Investing in parks, and the programming that occurs within these spaces,” he said, “must be a critical part of our approach to promoting an anti-racist and more equitable Los Angeles County.”  Yet, “given the Sheriff’s recent decision to curtail the Parks Services Bureau entirely, there is an immediate need to put a holistic and community-informed strategy in place so our parks can remain safe spaces for the community.”