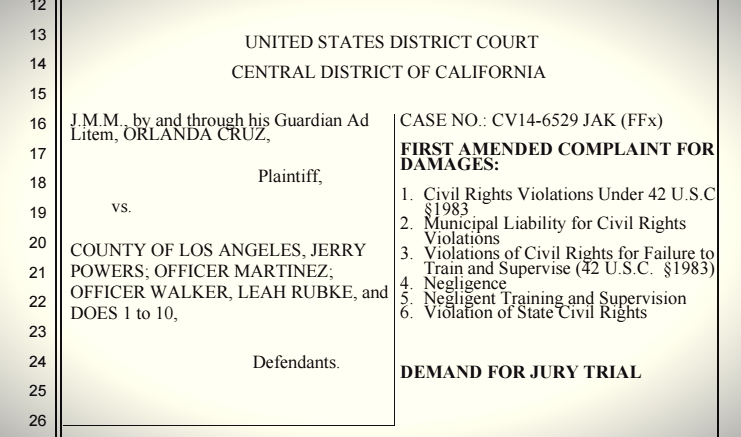 On Tuesday, the Los Angeles County Board of Supervisors approved a $3.9 million settlement to be paid to the family of a teen, “J.M.M.,” who was severely and permanently disabled as a result of a 2013 beating in an LA juvenile hall.

According to the federal lawsuit, probation officers told other incarcerated juveniles that the 16-year-old J.M.M. was locked up for a sexual offense allegedly involving a minor. The officers did this knowing that it would incite violence between J.M.M. and juveniles in lockup, according to J.M.M.’s attorneys.

J.M.M.’s attorneys filed a lawsuit through his guardian ad litem, Orlanda Cruz, against the county, then-Probation Chief Jerry Powers, two probation officers identified by their last names—Martinez and Walker—as well as Leah Rubke, a mental health care worker, and 10 unnamed “does” at the Barry J. Nidorf Juvenile Hall in Sylmar. The lawsuit was filed

J.M.M. reportedly faced threats from other wards prior to the July 23, 2013, beating. Juvenile hall staff allegedly failed to protect the teen, despite knowing about the threats other juveniles were making, according to the complaint.

Two weeks before July 23, Officer Martinez allegedly hit J.M.M. in the chest, back, and stomach, because of the crime for which J.M.M. was incarcerated. At that time, Officers Martinez and Walker reportedly “taunted” the teen and threatened to tell his peers about the nature of his offense so that he would be beaten by the other teens. After the incident with the officers, J.M.M. began receiving threats from other juveniles.

The actions of the defendants were “willful, wanton, malicious and oppressive,” according to the complaint.

According to the county, J.M.M. instigated the fight with the other juvenile “by rushing and striking” the teen. According to the county’s summary of the incident, J.M.M. started the fight because he believed the other boy had found out about his sex offender status. The other teen punched J.M.M. twice in the head. When J.M.M. went to the medical unit after the fight, he told staff that he had a headache and an earache. Probation staff later found J.M.M. unconscious in his room. The teen was transported to the hospital and underwent surgery.

J.M.M. suffered severe traumatic brain injury as a result of the July 23 incident. The other teen nearly killed J.M.M., who still cannot “speak or walk, or perform daily activities of life,” the complaint states. “Until recently, J.M.M. was fed through a feeding tube and was unable to breathe on his own. J.M.M. has no control of his bodily functions, must be kept in diapers and needs around the clock attendant care.”

According to the complaint, Probation officials “failed to provide adequate security, supervision, staffing and training to protect J.M.M. from harm even though they were aware of and had been warned about the dangers associated with the lack of supervision at this juvenile detention facility, and the dangers posed to those wards similarly situated to J.M.M.”

The county faulted the Probation Department for not having protocol or training that addresses what to do when a kid who has suffered a head injury is sent back to a regular living unit from the health care facility. Moreover, a lack of cameras in the juvenile hall made it impossible to know whether probation staff members were checking in on J.M.M. every fifteen minutes as is protocol.

Barry J. Nidorf is the same facility in which four male probation officers appeared to slug, push, and kick an unresisting teenager housed in Barry J. Nidorf Juvenile Hall in Sylmar, CA, as a supervisor looked on. The slugfest, which occurred on April 24, 2016, was caught on video by a camera mounted in the boy’s room. The video was leaked to WLA. The LA County District Attorney’s Office charged three of the officers with assault in March.