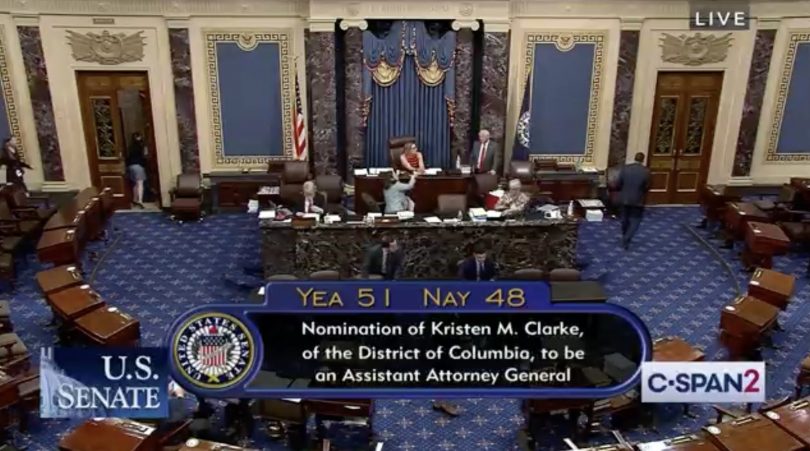 Today, Thursday, May 25,  the U.S. Senate voted 51-48 to confirm Kristen Clarke to lead the Civil Rights Division of the U.S. Department of Justice.

The road to confirmation was at times a decidedly bumpy one.

The daughter of Jamaican immigrants to Brooklyn,  Clarke’s confirmation is the shattering of two glass ceilings, since she is the first woman and the first Black woman to hold the position since the division’s founding in 1957.

Just before 7 p.m. Eastern, Vice President Kamala Harris administered the oath of office in a brief ceremony at the DOJ.  Clarke’s mother, Pansy Clarke, held the needed Bible as her daughter was sworn in.

The day of Clarke’s confirmation, and the subsequent swearing in by Harris, had an extra sheen of significance as it was also the the one year anniversary of the murder of George Floyd by former Minneapolis police officer Derek Chauvin. 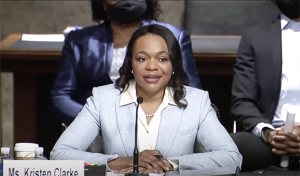 The importance of her confirmation was already weighted by the fact that, during the four years of Donald Trump’s presidency, both of Trump’s attorneys general, Jeff Sessions and Bill Barr, worked to roll back the work of the Civil Rights Division in notable ways, such as all but doing away with the use of court-enforced agreements like the “consent decree,” which had been used in past years to protect civil rights, and to push needed changes with law enforcement agencies around the nation, including the Los Angeles Police Department and the LA County Sheriff’s Department..

Now, the Biden administration has promised to revitalize the division as a part of its promise to combat systemic racism, and restrictive voter laws, along with a return to more active involvement in police reform.

Many believe that Clarke is exactly the right person for the job.

With degrees from Harvard University and Columbia University School of Law, prior to her nomination, Clark was the president & executive director of the Lawyers’ Committee for Civil Rights Under Law, and before that position, she served as the head of the Civil Rights Bureau for the New York State Attorney General’s Office.  In addition, Clarke spent several years at the NAACP’s Legal Defense and Educational Fund, Inc., where she helped lead the organization’s work in the areas of voting rights and election law across the country.

“With today’s confirmation of Kristen Clarke as assistant attorney general for civil rights…all people nationwide can be confident that we now have a civil rights leader who will enforce federal laws that protect us from discrimination and defend constitutional rights,” said Damon Hewitt, the acting president and executive director of the Lawyers’ Committee for Civil Rights Under Law, the organization that Clarke led until her nomination.

Georgia Senator Raphael Warnock called Clarke “an unwavering champion for justice, equality & civil rights,” and tweeted post confirmation that he was “eager to work alongside her to help the close the door on hate & discrimination.”

While, Clarke is a popular choice among justice advocates, and Democratic lawmakers,  nearly all Republican senators opposed the confirmation.  The exception was Senator Susan Collins of Maine.

(Republican Senator John Kennedy of Louisiana did not vote.)

Senator Ted Cruz was particularly intense in his opposition, which he expressed extravagantly before the vote, and again after Clarke was confirmed, when he released a written statement.

“Kristen Clarke,” he wrote, ” is completely unfit to serve as Assistant Attorney General for the Civil Rights Division. Not only has she made her disgust for law enforcement clear by her repeated calls to defund the police, she has a history of not only excusing, but celebrating criminals who have murdered police officers…”

There’ was more to the statement,  but you get the idea.

It turns out, however, that Cruz’s criticism was quite off the mark according to the views of actual heads of police organizations — present and former — who seem to feel quite differently than Senator Cruz does about the new head of the Civil Right’s Division.

In a letter about Clarke to congressional leaders written in early April, law enforcement leaders from more than three dozen cities stated that, in her years as a prosecutor and civil rights advocate,  Clarke had demonstrated “an uncanny ability to work closely with federal and state and local law enforcement officials.”

Among those who signed, were former LA Chief of Police Bill Bratton, who was also the commissioner of the New York Police Department,  Charles Ramsey, who ran the police forces in Philadelphia and Washington, D.C., plus a list of other law enforcement leaders.

“President Biden’s DOJ nominees made it clear that they neither support defunding the police nor believe that doing so will bring about the change our communities are calling for,” wrote Art Acevedo, Houston’s police chief , who is also the president of the Major Cities Chiefs Association.

According to NY Times DOJ reporter, Katie Benner,  Sen. Susan Collins had a similar impression when it came to Clarke and the police. Clarke, it seems,  had written her a letter, the senator said, making clear she was “committed to to ensuring that law enforcement officers have the resources that they need.”

In the statement Clarke read at the beginning of her confirmation hearings, she expressed her experience-honed passion for the job, but did so as the police groups suggested, without any of the us-versus-them demonization that has been repeatedly aimed her direction by her by critics.

“Our nation is a healthier place when we respect the rights of all communities,” Clarke said. “In every role I’ve held, I have worked with and for people of all backgrounds – regardless of race, national origin, religion, or disability status. I’ve listened deeply to all sides of debates, regardless of political affiliation. There is no substitute to listening and learning in this work, and I pledge to you that I will bring that to the role if confirmed.”

Yet, in her previous position at the Lawyers’ Committee for Civil Rights Under Law, Clarke sued the Trump administration on a range of issues, such as voting rights, changes to the U.S. Census, and tear-gassing of protesters outside the White House last summer, during the protests and marches that followed the killing of George Floyd, and more.

Thus, as the new head of the DOJ’s Civil Rights Division, Clarke appears to be quite clear-eyed about what her new job entails.

In January of this year, she appeared at a Wilmington, Delaware, event with then President-elect Joe Biden and then Vice President-elect Kamala Harris   The nation was “at a crossroads” she said when she spoke at the event

“I see the future of America through the eyes of my son. And honestly, at times I am worried,” said Clark, who is the single mother of a teenage boy.

“Will he have full and equal access to the extraordinary opportunities of American life? Will he be able to embrace those opportunities in safety and dignity? Will all of America’s children?”

As of today, it will be a part of Kristen Clarke’s job to try to answer those questions.