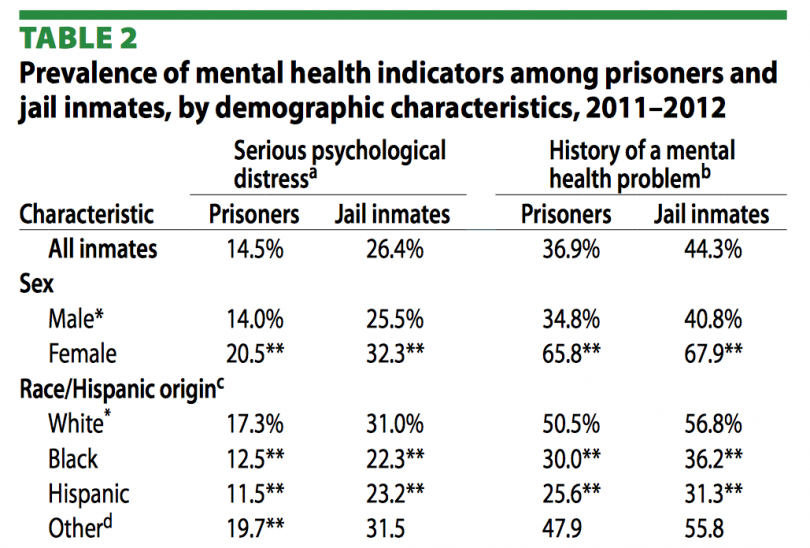 Why Are Female Inmates Twice As Likely as Male Inmates to Be Struggling With Mental Health Issues Behind Bars? (And What Should We Do About It?)

A study released last week by the U.S. Bureau of Justice Statistics indicates that two thirds (66%) of all women in prison report having a history of mental health problems, as compared to 35 percent of male inmates.

When it came to U.S. jail inmates, the female/male mental health discrepancy is nearly as dramatic, with 68 percent of female jail inmates having been told they had a mental disorder, versus 41 percent of males in jail who had received such a diagnosis.

The June 2017 study—which drills down into a National Inmate Survey conducted from February 2011 to March 2012, in which more than 100,000 men and women in U.S. jails and prisons around the country were questioned—also noted differences in mental health problems across various ages, and races.

But, the most startling differences consistantly had to do with gender.

The survey measured inmate mental health issues in two ways. First the survey questioned both prison and jail inmates to find out if they’d had experiences “that met the threshold for serious psychological distress (SPD) in the 30 days prior to a survey.”

To measure “serious psychological distress,” inmates were asked six questions that are part of the “Kessler 6 or K-6,” a well-regarded screening tool for serious mental illness among adults age 18 or older. Specifically, the respondents were asked how often during the 30 days prior to the interview they felt the following: (1) nervous, (2) hopeless, (3) restless or fidgety, (4) so depressed that nothing could cheer them up, (5)  everything was an effort, (6) worthless.

Then, in a second round of questions, the prisoners and jail inmates were asked if they’d ever been told in the past by a mental health professional that they had a mental disorder. If the answer was yes, they were asked to check the disorder from a list of common disorders.

About 1 in 7 state and federal prisoners (14%) and 1 in 4 jail inmates (26%) reported experiences that met the threshold for serious psychological distress (SPD) in the 30 days prior to the survey.
Similarly, 37% of prison inmates and 44% of jail inmates reported that they’d been told at some point in the past by a medical professional that they had a mental disorder.

For those of either gender who had been diagnosed by a mental health professional, the most common diagnosis for both prison and jail inmates was major depressive disorder (24.2% prison, 34.6% jail), followed by bi-polar disorders (17.5% prison, 24.9% jail). Post traumatic stress disorder and anxiety disorder were next with 12.5% prison, 15.9% jail for PTSD, and 11.7 prison, 18.4% jail, for extreme anxiety.

(Unfortunately, the report does not break down the various diagnoses by gender.)

So what causes this crisis-sized gender gap? Some justice advocates think that the place to look is childhood abuse and trauma, which—statistically—women inmates experience at far greater rates than male inmates do.

So Why the Big Gender Difference?

While we don’t yet have a companion report that takes the next step and screens 100,000 prison and jail inmates for possible causal factors like sexual and physical abuse and childhood trauma, there are a series of good reports and studies that suggest areas where researchers ought to look.

For instance, the excellent 2015 report on girls in the juvenile justice system, authored by the Human Rights Project for Girls, the Georgetown Law Center on Poverty and Inequality, the Ms. Foundation for Women, and the Human Rights Project for Girls, assessed a wide array of recent studies, some regional, some national, and found that girls in the justice system have a rate of prior sexual abuse that is four times higher than that of boys’ in juvenile justice (31% for females, 7% for males), and girls’ rate of “complex trauma,” meaning four or more Adverse Childhood Experiences (ACEs…AKA serious trauma) is nearly twice as prevalent as it is for boys (45% for girls, 24% for boys).

Even as early as nearly two decades ago, research coming out of the Department of Justice noted the staggering disparity between male and female inmates when it came to physical and sexual abuse. For instance, in a 1999 study, among State prison inmates 1 in 20 men were sexually abused before age 18. Among women inmates, it was 1 in 4. Regarding physical abuse, 1 in 10 male state inmates reported being physically abused. For female inmates, again it was 1 in 4.

And there are more studies where these came from.

So, is there a cause-and-effect pattern that justice policy makers should be noticing and addressing? Or, as some juvenile advocates have put it, is there an abuse-to-prison-pipeline that is affecting girls and women at crisis levels? Tiffany Johnson, associate director of A New Way of Life

Johnson is the associate director of A New Way of Life Re-Entry Project, which provides housing, case management, pro bono legal services, and more for women rebuilding their lives after prison. She is also a woman who went to prison with a life sentence.

“I am a former lifer whose incarceration was the direct result of nearly a decade of unacknowledged, undiagnosed and untreated sexual abuse,” Johnson wrote in response to last week’s report. “That man was my mother’s boyfriend, and I was his ‘special girl.’ Because of his status in our family, I never mentioned the sexual trauma, which abruptly stopped when I reached puberty.”

It doesn’t help, according to Johnson, that in communities of color, “the subject of sexual abuse is taboo and not discussed. Therefore, victims are literally forced to keep ‘secrets’ bottled up inside. They have no clue how to process what has, and often continues to happen.”

Based on spending more than a decade in prison in her past, Johnson said she believes the gender disparity when it comes to mental illness may be even greater than the study suggests. “It’s been my experience,” she said, “that when women get trapped in the criminal justice system, most come with untreated mental disorders, yet the cry for help is not being recognized or addressed.”

If treated at all, said Johnson, women’s symptoms are generally medicated, “which only masks the trauma, while life behind bars deepens the cycles that lead to crisis.”

As it happens, the Bureau of Justice Statistics study validates her observation. A full three-quarters of those (74%) who hit the SPD threshold had been given medication in the past. That number went up to 80% for those who were diagnosed by a medical professional.

**Correction: Through a series of miscommunications on our part, we mistakenly thought the statements above from A New Way of Life’s Tiffany Johnson were from A New Way of Life’s founder and president, Susan Burton. Both women are unique and outstanding women. Both have been to prison, and both have been through horrific sexual abuse in their earlier lives. But Johnson went to prison with a 15-to-life sentence, while Burton went to prison multiple times for short term sentences as she struggled with addiction while she reeled from the death of her young son. We regret any confusing that resulted from our error. (Correction posted: 12:27 p.m., June 27, 2017)