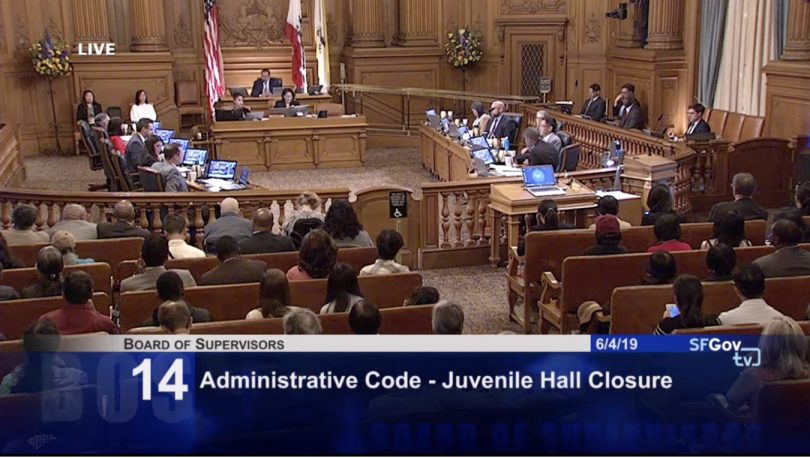 On Tuesday, June 4, the San Francisco Board of Supervisors voted 10-1 in favor of legislation to shutter the city’s juvenile hall by December 2021. The ordinance, authored by Supervisors Hillary Ronen, Shamann Walton, and Matt Haney, in partnership with the Young Women’s Freedom Center, makes SF the first major urban city to choose to abolish juvenile incarceration.

“Today, we celebrate our young people for their courage to reimagine the juvenile justice system in our city and their brilliance, strength and tenacity to see this crucial work through,” said Jessica Nowlan, Executive Director of Young Women’s Freedom Center. “This is what innovation truly looks like – we need to transform the systems that oppress and harm too many of our young people, families and communities, and instead invest with what helps us thrive. Thank you to the Board of Supervisors for seizing this opportunity.”

As of December 2018, San Francisco’s sole, 150-bed, juvenile lockup was sitting at 27 percent of capacity with just 40 kids, most of whom were held for non-violent crimes. At the same time, the city spent more than $13 million on running its juvenile hall during fiscal year 2017-2018.

Moreover, studies have shown that for all the money that local and state governments spend to lock up youth, juvenile incarceration does not succeed at rehabilitating kids, but serves to push them deeper into the criminal justice system, heaping additional trauma onto already traumatized youth.

“The detention of young people is not rehabilitative, nor does it effectively address public safety,” Tuesday’s ordinance states. “Detention increases the likelihood of recidivism, future incarceration, and homelessness, and results in lower high school completion rates.”

With this in mind, SF’s juvenile hall will be replaced with expanded use of community-based alternatives to incarceration. And for those kids who must be detained according to state law in order to keep the public safe, the city will turn to a new, non-institutional facility focused on rehabilitation, rather than punishment. “The place of detention shall be a safe and supportive homelike environment, which shall not be deemed to be, nor treated as, a penal institution,” according to the ordinance.

The ordinance requires the creation of a “Close Juvenile Hall Working Group” comprised of SF’s chief juvenile probation officer, district attorney, and public defender, as well as representatives from community organizations serving kids who have had contact with the justice system, formerly locked up youth, parents of once-incarcerated kids, and juvenile justice and mental health experts, and more.

Tuesday’s legislation also calls for the establishment of a Youth Justice Reinvestment Fund through which community-based organizations will receive increased support from the city so that they can expand to meet the needs of the kids who will no longer land in juvenile hall.

“Shutting down juvenile hall will allow us to create something new, something that actually supports young people who have been caught up in the system and helps us to heal,” said Young Women’s Freedom Center organizer, K.I. Ifopo. “This is about justice and reducing the harm that happens to our young people. Now, we finally have the chance to do better by the kids that have been locked up without the care of our families, friends and communities.”

The plan does not have the support of every San Francisco official, however.

Mayor London Breed has remained in opposition to the plan, which she has said is premature. In April, in response to a San Francisco Chronicle series, which revealed the sky-high price taxpayers pay to incarcerate kids in SF’s juvenile hall, Breed established a blue ribbon commission made up of criminal justice experts, advocates, and officials to carefully examine the local juvenile justice system. The panel is not expected to return with a report detailing ways to reform the system and further reduce incarceration, and what to do with the juvenile hall, until the end of 2019. This study, Breed says, should precede any decision to close juvenile hall.

SF’s chief probation officer, Allen Nance, has also fought against the ordinance, arguing that if the city fails to come up with an alternative facility by the end of the deadline, San Francisco might be forced to send kids to lockups in other jurisdictions, farther from home.

“I want to be clear that we would never put a system in place that is worse than our current juvenile hall,” said Supervisor Shamann Walton, who was incarcerated as a kid in Solano and Contra Costa counties. “We are proposing an alternative to juvenile hall that also provides a true opportunity for young people to be rehabilitated.” Kids will receive “job training, mental health supports, education connections,” a system that “provides a true pathway to success, even for serious offenders,” and “individualized plans that focus on the person and not the infraction.” San Francisco’s current juvenile hall, Walton said, “has never been set up to do that.”

Despite the 10-1 majority vote, Tuesday’s ordinance must be voted on a second time before it is sent to the mayor’s office. The mayor, however, will not be able to veto the ordinance.