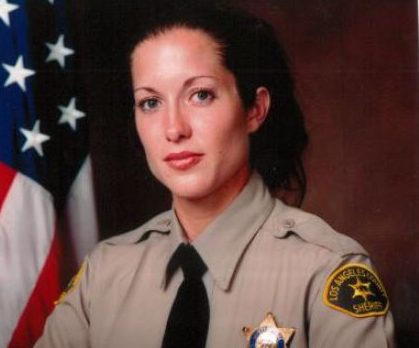 Members of the Los Angeles County Sheriff’s Department along with the West Hollywood community are grieving the death of Detective Amber Leist who had stopped her car at around 11:05 a.m. on Sunday morning, in order to run and help an older woman who had stumbled and fallen down in the middle of the street when attempting to cross at a crosswalk at the intersection Riverside Drive and Whitsett Avenue.

According to LA County Sheriff Alex Villanueva, Leist was attempting to return to her car after having successfully aided the woman when she was fatally struck by another car, which came through the intersection when the light turned green.

The driver of the car that hit Leist reportedly pulled over to try to help.

But it was too late. Leist was transported to a nearby hospital where she died of her injuries.

The well-regarded detective was a 41-year-old mother of two sons, ages 17 and 20, one of them reportedly serving in the U.S. Navy.  A 12-year veteran of the department, Leist had been with the West Hollywood station for five years and during that time was promoted to detective.

“From when she was a young girl she stood up for those who were less fortunate, those who were vulnerable,” Amber Leist’s father told KCBS TV.  “When she came into the sheriff’s department, she took on that servant part” of herself.

Her boss at West Hollywood Station, Captain Ed Ramirez, agreed with the characterization of quiet heroism. Detective Leist, he said, was the go-to person “who could always calm people down.”