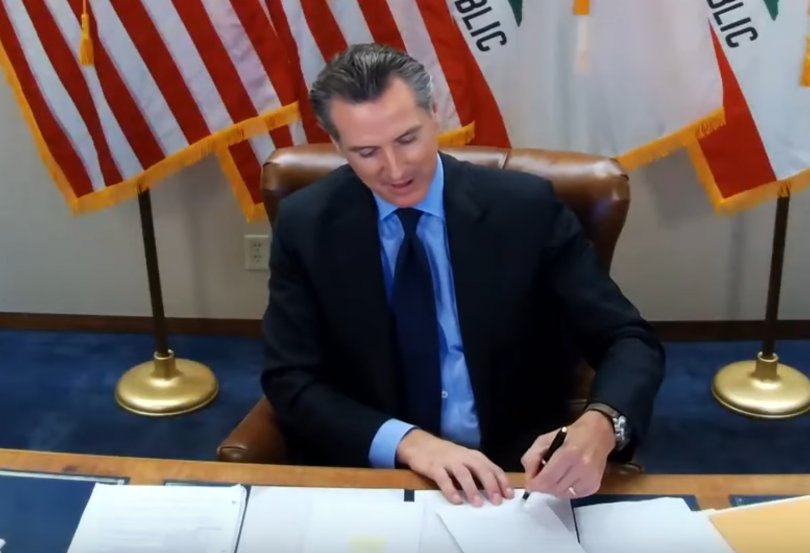 Between Monday and Wednesday, his final day to sign or veto bills passed during the 2020 legislative session, California Governor Gavin Newsom approved a stack of significant criminal justice reforms, within which was the California Racial Justice Act, a bill to eliminate racism in the courtroom, and other high profile bills.

Newsom delivered some surprises, too, however, including a veto of a bill that would have cleared a path for health agencies and community-based organizations to take on more emergency response duties involving “vulnerable populations.”

The California Racial Justice Act, AB 2542, introduced by Assemblymember Ash Kalra (D-San Jose), and signed by the governor this week, will “prohibit the use of race, ethnicity or national origin to seek or obtain convictions or sentences.”

In 1987, a U.S. Supreme Court decision in McCleskey v. Kemp established that defendants must prove that the prosecution was “intentionally” discriminatory when challenging racial bias in their legal process. This decision set a nearly impossible-to-meet standard of proof. AB 2542 seeks to address this issue.

In addition to prohibiting the use of race in convictions and sentencing, the CA Racial Justice Act will also create a system for defendants to challenge alleged racial bias at trial or after a conviction.

The governor also signed his support for a bill to address discrimination affecting the 911 system.

Asm. Reggie Jones-Sawyer’s  AB 1775 will make it a hate crime to make a bogus 911 call based on a person’s actual or perceived race, ethnicity, gender, immigration status, disability, or other characteristic listed in the Ralph Civil Rights Act of 1976.

In the realm of juvenile justice, Governor Newsom signed SB 1290, which takes the state’s efforts to eliminate fines and fees levied against families with kids in the juvenile justice system a step further, and AB 901, which ends the so-called “voluntary” probation programs that unnecessarily bring kids who have not been charged with a crime into contact with the probation system, usually in response to childish behavior at school.

(Note: WLA will soon have a separate story on SB 823, the bill to close the state’s youth prison system, the Division of Juvenile Justice — “the right way,” according to advocates.)

Adult probation, too, is headed toward big changes. AB 1950, by Asm. Kamlager, will reduce the maximum probation term for a misdemeanor (currently 3 years for most crimes), to one year in most cases, and would set a limit of two years of probation for most felony convictions. The bill is expected to save the state hundreds of millions of dollars, and help reduce recidivism by shortening the length of time that an individual “might be subject to arbitrary or technical” probation violations that send them back to lockup.

Newsom further moved to address overincarceration by signing a bill that will lower the age limit for elderly parole from 60 to 50, as long as an individual has served at least 20 years in prison. The bill, AB 3234 by Asm. Phil Ting, will also establish a misdemeanor diversion program that would allow judges to divert a person from jail over the objection of a prosecuting attorney.

“The gains that have been made in recent years,” said Jay Jordan, executive director of Californians for Safety and Justice, “prove that justice reforms can reduce over-incarceration and dangerous prison overcrowding, while making communities safer as crime rates remain at historically low levels.”

The governor also approved a bill that will require the state Attorney General to step in and conduct independent investigations of incidents in which police fatally shoot unarmed civilians.

The bill, AB 1506, by Assemblymember Kevin McCarty (D-Sacramento), will increase oversight of law enforcement across the state by establishing the Statewide Officer Deadly Force Investigation Division within the Department of Justice. This division would “upon request of a law enforcement agency or District Attorney, conduct an investigation into an officer-involved deadly-force incident, provide written findings, and if applicable, conduct the prosecution of the officer(s) involved.” The bill by Asm. McCarty, would also create a Police Practices Division to review “patterns and practices” of law enforcement agencies that request a review and recommendations for improvement.

A second accountability-focused bill from McCarty signed by the governor, AB 1185, will affirm that county supervisors have the authority to create civilian oversight commissions and inspector generals. Taking it a step further, the bill will clarify in the state law that those oversight bodies have the power to subpoena documents from sheriff’s departments. (The issue of whether inspector generals and oversight commissions should have subpoena power, and how much information a sheriff has to share, has been at the center of an ongoing battle in Los Angeles County.)

The governor made final decisions on several other bills related to issues that have garnered attention as Americans continue to protest across the country include AB 1196, introduced by Assemblyman Mike Gipson (D-Carson) to bar law enforcement agencies from using carotid restraints, chokeholds, and “other techniques or transport methods that involve a substantial risk of positional asphyxia.”

Another bill, SB 480, by Sen. Bob Archuleta (D-Pico Rivera), will bar law enforcement officers from wearing camouflage or uniforms substantially similar to the uniforms worn by members of the U.S. Armed Forces.

In recent months, a number of alarming stories of journalists getting pepper-sprayed and taking painful hits from rubber bullets in the head, and neck, and even being blinded by direct shots to eyes, despite identifying themselves as members of the press. SB 629, by Sen. Mike McGuire (D-Healdsburg), sought to address the issue by guarding journalists covering protests and other demonstrations from being “intentionally assaulted, interfered with, or obstructed” from reporting by law enforcement officers. Governor Newsom returned the bill unsigned, noting that while press access to protests and other public gatherings “is essential for a functioning democracy,” he worried that the bill would “inadvertently provide unfettered access to a law enforcement command center.”

“As written, this bill would allow any person who appears to be engaged in gathering, receiving or processing information, who produces a business card, press badge, other similar credential, or who is carrying professional broadcasting or recording equipment to have access to a restricted law enforcement area,” Newsom wrote. “This could include those individuals who may pose a security risk — such as white nationalists, extreme anarchists or other fringe groups with an online presence.”

Newsom said he intended to work with legislators in the future to provide “access to journalists in a way that addresses the security concerns and accomplishes the intent of this bill.”

The first bill, AB 2992 by Assemblymember Shirley Weber (D-San Diego) will protect survivors of violent crime and family members of homicide victims from being fired. Under the bill, these individuals will be allowed to take unpaid time off work in the wake of the crime without fear of losing their jobs.

The second bill, Senator Maria Elena Durazo’s SB 1190, will allow victims of violent crime to break lease without penalty within the first six months of a crime occurring. Current law only allows a crime survivor to break lease within 14 days after a crime. This bill will also expand the list of crimes that qualify a person for penalty-free relocation.

Thanks to a freshly signed bill, SB 132, California prison staff will be required to ensure that incarcerated transgender individuals are housed according to their gender identity, unless a person’s “perception of their own health and safety needs requires a different placement, in which case the person shall be housed in accordance with their stated health and safety needs.”

The governor also signed AB 732, a bill to improve reproductive health care and living conditions for pregnant people in California’s jails. (We wrote about AB 732 in depth: here.)

Not every bill meant to change the way state and local justice systems function made it past the governor, however.

One of the more surprising vetoes from Newsom this week, was of AB 2054, a bill that would have created a three-year pilot program under the Office of Emergency Services focused on putting community organizations in the role of first responder for certain calls involving homelessness, mental health, domestic abuse, and other situations that the bill’s author,  Assemblymember Sydney Kamlager (D-Los Angeles), and supporters agreed would be better served by community-based response teams centered on culturally appropriate, trauma-informed, and relationship-building services.

(Just this week, the Los Angeles County Board of Supervisors voted to move forward with a similar initiative at the local level.)

While the governor stressed in his veto message that the idea of alternatives to police-led emergency response was an important one, he said the Office of Emergency Services was not the “appropriate location for the pilot program proposed in this legislation,” which he said should be addressed through the state budget process. “My Administration will work with the Legislature and stakeholders during the next legislative session on an implementation solution,” Newsom said.

Newsom also vetoed Sen. Bob Hertzberg’s SB 369, a bill that would have created a reentry commission at the state level. This advisory commission would have been tasked with creating a grant program for community-based reentry services, as well as with building a health and safety agenda for people returning to their communities from prisons and jails. The commission would have also conducted a review of thousands of barriers to successful reentry that formerly incarcerated people face, write a reentry guidebook, and set up a clearinghouse of reentry resources online.

The governor also chose not to sign a bill aimed at reducing the financial burden that incarceration places on families.

Under SB 555, by Sen. Holly Mitchell (D-Los Angeles), local sheriffs and probation departments would no longer have been allowed to sell commissary items for more than 10 percent above the cost paid to the vendor.

The bill also would have capped jail phone call and video call rates at $.05 and $.25 per minute respectively. Certain fees for money transfers and other financial transactions would also have been eliminated.