Editor’s Note: Since the Gold Rush, California’s youth prisons or “correctional institutions” have been characterized by neglect, violence, and abuse, despite attempts at reform.

During the bad old days of the mid-1990s through to the early 2000s, when California’s youth prison system was known as the California Youth Authority, or CYA, the system was plagued by a mind-numbing level of controversy and scandal that included a wave of youth suicides and graphic reports of horrific abuse by staff.

Finally, in November 2004, a consent decree was ordered as part of the settlement of a lawsuit, Farrell v. Harper, which detailed nightmarishly unconstitutional conditions in the CYA facilities, and laid down a list of mandated reforms.

The core requirement of the Farrell agreement was that CYA must exchange its abusive, and viciously punitive system for a rehabilitative model of working with kids. Theoretically, that was accomplished.

In early 2016, the state’s youth system — by then renamed the Division of Juvenile Justice (DJJ) — was deemed to be sufficiently reformed to be released from its 12-year consent decree.

Yet, in truth, the system had not solidified reform.

Now, of course, California leaders are phasing out the state’s youth prison system, which will be replaced with local supervision and services, as part of a “reimagined” approach to youth justice.

Below is an account of photographer David Reeve’s “Gladiator School” project, a collection of portraits and stories of the daily lives of the boys — now, adult men — who spent time inside one of the most notoriously violent lockups run by the California Youth Authority: the Heman G. Stark Youth Correctional Facility, known as the Youth Training School (YTS).

The story begins at a reunion in Yucaipa for former YTS prisoners.

As David Reeve approached the picnic, he knew he was the odd one out. After all, it took some convincing for the group to make an exception for him. Unlike the men barbecuing and swapping prison stories, Reeve never spent time in California’s juvenile justice system or its infamous Youth Training School, which the men dubbed the “Gladiator School.”

Among the picnickers who gathered at Yucaipa Community Park in Yucaipa, California for the reunion, was John Berge. He spent 22 months at YTS before returning as an adult, working as a Vocational Instructor, and later as an Institutional Gang Investigator.

Berge recounts his time at YTS in part 4 of “Gladiator School: Stories from Inside YTS.” The project is personal for Reeve, a 49-year-old marketer by day and writer and photographer by night. He earns no money by telling their stories. As of now, he has published seven parts on Medium with more on the way.

“People have very tough decisions to make about criminal justice, juvenile justice and prison reform, but prisons remain a huge source of mystery, so what fuels those decisions,” Reeve said. “With ‘Gladiator School,’ we’re hearing from people that were there, which I think is the missing element.”

He wants to provide former wards, guards, teachers, and administrative staff at YTS the space to tell stories, some of whom have never had that chance, he said.

Both Teachers, Inmates Were Abused

Reeve lives 20 minutes from YTS, also known as the Heman G. Stark Correctional Facility. After discovering that his grandfather consulted for the prison, he tried to get a tour. It took months of persistent emails and letters to the state corrections department and using his family connection as leverage. Eventually, he was allowed entry in 2017.

“It didn’t look like a rehabilitative place,” he said. “It felt like a prison. It felt permanent.”

During the tour, Reeve snapped photos for what would become the first installment of “Gladiator School.”

The facility was opened in 1959 with the goal of educating and rehabilitating wards between the ages of 12 and 25. After a number of violent incidents that included the murder of a counselor in 1996 the state began scrutinizing the prison, he said. 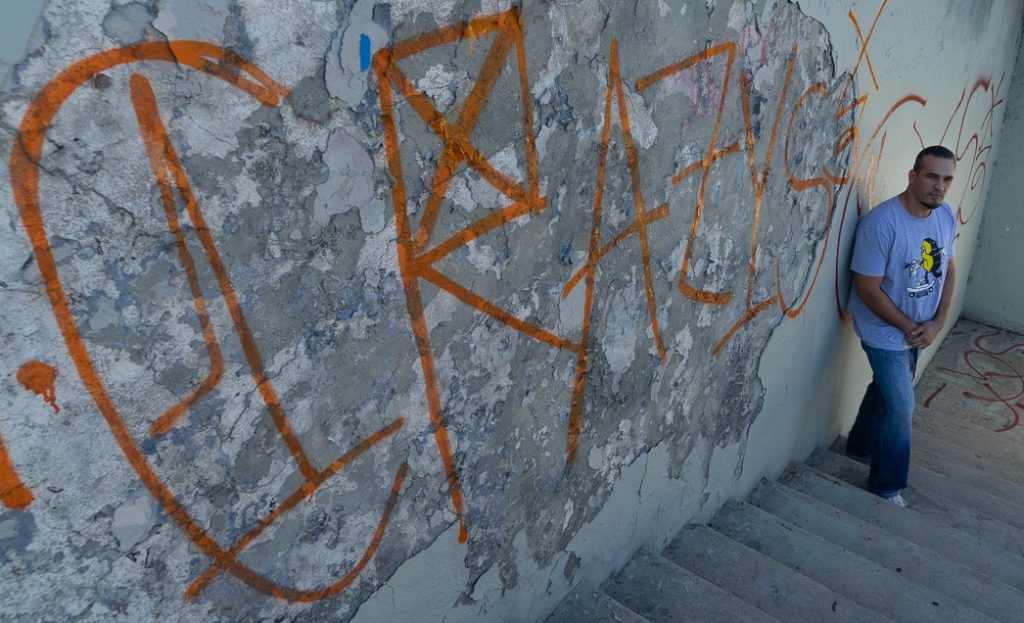 Chris, aka “Child,” defended his Echo Park neighborhood as a member of the Westside Crazies in his youth. Gang affiliations defined enemies and allies on the street — and in prison.

A 2007 report released by the state’s inspector general found that wards spent 22 hours a day in their cells while wards in the transitional program were not assigned classes, despite being in the unit for three months. Wards and staff were in physical danger due to the environment, abundance of contraband and a broken health care system, the report said.

The state closed the facility in 2010, to cut costs, it said. Reeve said the violence and lack of reform forced the state to close it.

Today, the former juvenile prison sits empty. It’s staffed with a maintenance crew for upkeep, just in case the state decides to use the facility, he said.

Through his interviews and research, he’s heard of teachers who were abused, inmates who had to fight to protect themselves and guards who abused inmates and set up Friday night fights between wards.

‘Violence Was the Currency’

“It all becomes very complicated; it’s not good guys versus bad guys,” Reeve said. “There were well-intentioned people who appear to have gotten caught up in the madness.”

Some like Bruce Lisker were falsely accused. Lisker explains in part 7 how ineffective legal counsel resulted in him being sentenced to 26 years for his mother’s murder.

Violence was common at YTS. Lisker told Reeve there were five to 10 assaults a day. In one fight, the former CYA ward said he was given two black eyes.

“People were put in these violent situations because violence was the currency,” Reeve said. “If you didn’t display violence, you are going to become a victim of it, and we see it from the wards and the guards.”

Two years after Reeve published the photo essay of the facility, he went to the park in Yucaipa. He had gotten emails from former YTS inmates and wanted to meet them — maybe even write more about the prison.

At the reunion, he met Chuck Supple, the former state director of juvenile justice, who had flown from Sacramento to attend the picnic.

“He starts telling us a story that the Department of Juvenile Justice was moving out of adult prisons and into a health and human services category in the state,” Reeve said.

Gov. Gavin Newsom signed into law on Sept. 30, legislation to close the state Division of Juvenile Justice, and replace it with local alternatives.

“It was corrupt, it was horrible, and we continue to inch our way forward into more progressive forms of discipline and rehabilitation, and I’m happy to see that,” Reeve said. “I’m sure it’ll be criticized and debated, but it’s an attempt.”

With the juvenile system changing in California, he said it’s important to remember these stories so they aren’t repeated.

“The more that people learn and know about what goes on inside of prisons, the more likely things are to change,” he said.

Featured image: Chris (aka Savage) told the story of being sent to “The Hole” in “Gladiator School” for hiding a shank under his mattress as a youth, when the prison broke out into a riot.

This story was first published by the Juvenile Justice Information Exchange.