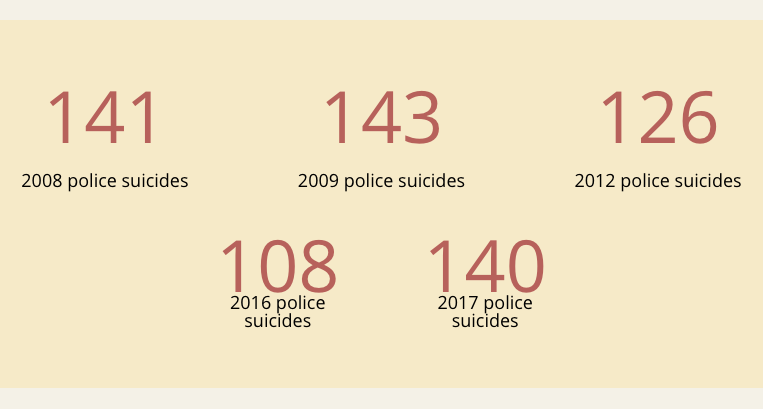 Law enforcement officers and firefighters are more likely to commit suicide than to die in the line of duty, according to a white paper study by the Ruderman Family Foundation that looks at often ignored effects of trauma and post-traumatic stress disorder on first responders.

A 2015 survey of 193 law enforcement officers from small and midsize departments found that police witness around 188 “critical incidents” during their careers.

Using a sample of 750 police officers, a 2016 study revealed that the cops’ exposure to critical incidents was “statistically significantly correlated” with drinking and PTSD. Those officers that had experienced a higher number of critical incidents were more likely to report having symptoms of PTSD and consuming alcohol.

And for many police with military history, these critical incidents are heaped onto “a career that is already rife with trauma,” according to the Ruderman paper. The cumulative effects of PTSD can be lethal.

Yet, shame and stigma create significant barriers to getting help for PTSD, suicidality, and other mental health needs among law enforcement officers, the Ruderman study says.

The authors of the Ruderman white paper know first-hand the mental health dangers that first responders face. Contributor Jeff Dill is a retired fire captain and founder of the Firefighter Behavioral Health Alliance, Robert Douglas is founder of the National Police Suicide Foundation and a retired Baltimore officer, William Evans is the commissioner of the Boston Police Department, and Ron Clark is a retired Connecticut State Police sergeant who helped establish the first Critical Incident Stress Debriefing Team in Connecticut and served as its President.

A Look at the Numbers

Data shows that there are between 100 and 150 police suicides each year, or approximately 12 – 17 per 100,000 officers. In comparison, members of the general public kill themselves at a rate of 13 per every 100,000. It has been argued that the rate of suicide among police should be lower than the general population, considering the extensive background checks and psychological evaluations individuals must pass to become a law enforcement officer. Firefighters have an even higher rate of suicide: 18 out of every 100,000.

In 2017, there were approximately 140 police officer suicides nationwide, according to the Badge of Life, a nonprofit organization focused on police suicide research and improving mental health outcomes for cops.

In comparison, 46 officers were fatally shot in the line of duty, last year.

“An officer commits suicide every 81 hours,” the Badge of Life website states.

(Michael’s story, written by Ashleigh Fryer, is part of a series developed through the Face to Face Initiative, a project from the National Reentry Resource Center and The Council of State Governments Justice Center.)

“Police and firefighters, when compared to the general civilian population, are at heightened risk for depression, post-traumatic stress disorder (PTSD), and suicide,” the white paper states.

Yet less just 3-5 percent of the nation’s 18,000 law enforcement agencies have suicide prevention training programs in place, according to the National Police Suicide Foundation.

The Ruderman study suggests mandatory mental health check-ups for cops and firefighters may be a solution.

“We need to end the silence that surrounds the issue of first responder mental health. We should celebrate the lives of those lost to suicide – at national monuments such as the National Law Enforcement Memorial, in the media, and within police and fire departments around the country,” said Jay Ruderman, President of the Ruderman Family Foundation. “Also, departments should encourage or require first responders to access mental health services annually. This will enable our heroes to identify issues early, and get the help that they need. It will save lives.”

The Badge of Life, says these check-ups must remain voluntary, not mandatory. “Voluntary is the key,” according to BOL, “The purpose of such checks, which must remain completely confidential from the department, is to review the past year, see what has worked well—and what can be improved.” Through these mental health visits, departments can reduce officer suicides. The check-ups are “the strongest guarantee that an officer can continue a healthy career without stress and anxiety—after all, an officer who is distracted is a danger to himself and the officers who are relying on him,” BOL states.

The Ruderman paper praises the Law Enforcement Mental Health and Wellness Act, signed by President Donald Trump this year, as a welcome step toward improving mental health services for police. The law funds peer mentoring programs and will lead to the evaluation of other mental health programs and initiatives, including mandatory mental health check-ups and crisis hotlines.

“First responders are heroes who run towards danger every day in order to save the lives of others. They are also human beings, and their work exerts a toll on their mental health,” Ruderman said. “It is our obligation to support them in every way possible – to make sure that they feel welcome and able to access life-saving mental health care. This white paper should serve as a critical call to action to all who care about our heroes in red and blue.”