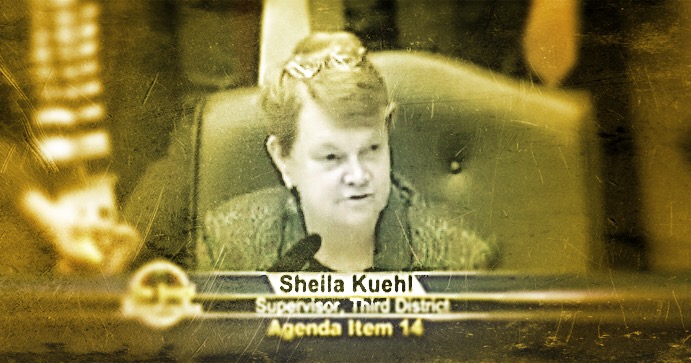 The Los Angeles County Board of Supervisors voted Tuesday in favor of a $3 million agreement with the non-profit California Community Foundation to provide defense attorneys to immigrants at risk of deportation who cannot afford legal representation.

The two-year, $3 million contract is part of a larger $10 million Los Angeles Justice Fund partnership between the county, the city of LA, and local organizations. The city will give $2 million, and another $5 million will be funded by philanthropic organizations. The county will pay $1 million for fiscal year 2017-2018, and $2 million for fiscal year 2018-2019.

“If you are an immigrant facing deportation, you are likely to speak a different language, be unfamiliar with complicated legal processes, and be unable to afford a lawyer to represent you,” said Supervisor Hilda L. Solis. “Thousands of immigrants are forced to defend themselves in a court of law due to a lack of resources.”

Solis called the vote a decision “that is pro-family, pro-economic growth and stability, and pro-civil and human rights.” People “who have simply been trying to make a better life for themselves and their families,” will have access to due process.

The LA Justice Fund will not provide representation to all low-income immigrants facing deportation, however. The fund excludes people who have been convicted of a violent felony.

The “carveout,” as it is called, specifically refers to people who have committed a violent felony offense as defined by California Penal Code Section 667.5(c). Under the code, violent felonies including murder, attempted murder, rape, kidnapping, plus offenses like robbery, carjacking, first degree burglary, arson, and more. (Read the rest of the violent crime list: here.)

Supervisor Sheila Kuehl and many community members and advocates who spoke about the fund at the Tuesday meeting argued that the justice fund should not have a blanket exclusion of people convicted of violent crimes.

Supervisor Kuehl noted that because the carveout was included in the contract language, there was no way to do away with it without voting against the whole contract. “Were I not to wish to vote for the carveout, it’s not really possible, because I really favor the justice fund.” Kuehl said that she wished for “a way not to exclude” individuals convicted of violent offenses without at least being able to consider mitigating circumstances. “When you’ve paid your debt to society, when you’ve gone to serve, when you’ve done a number of things to turn your life around, at least your case deserves to be looked at,” Kuehl said.

Phal Sok, brought to the US from Thailand at 61-days-old, is one of those who would be barred from accessing legal representation through the LA Justice Fund. Sok, now in his mid-30s, held up a sewing shop at age 16, and was charged and convicted as an adult. Sok said he was “found not to be a danger to Los Angeles” and paroled in 2015, at which time US Immigration and Customs Enforcement picked him up and placed him in removal proceedings. Sok was able to avoid deportation, at least temporarily. “I got out, I got involved with the community, I engaged with non-profit work, and did a lot of work, only to be re-detained by ICE again.” Once again free from ICE custody, Sok spoke out against the carveout before the supervisors on Tuesday.

Joel Frost-Tift, an immigration attorney with Esperanza Immigrant Rights Project also argued the importance of legal representation for every immigrant facing deportation, regardless of criminal history.

“Please don’t leave people like Phal in the dark in order to be able to say you were tough on crime,” Frost-Tift said. The lawyer also urged the board to do away with a restriction on reimbursing travel expenses for attorneys, pointing out the 100-mile distance between Los Angeles courts and the Adelanto Detention Facility, the state’s largest immigrant detention facility. It would be difficult, Frost-Tift said, for participating non-profits to “provide the necessary services if our travel expenses are not covered.”

San Francisco and the state of New York have immigrant defense funds similar to LA’s, but without the carveouts.

Emmy McClain, a lawyer with the National Day Laborer Organizing Network, said she had spoken with NY lawyers who represented people that would be denied representation in LA, including an elderly woman with a green card who committed a crime after a psychotic break,” and “a young man convicted of a crime in self-defense when attacked by a gang.”

“I’m saddened that LA is not at a place where we can recognize the wholeness of our community members and the possibility of second chances,” McClain said. “I am grateful however to the commitments to the first phase of this program. The attorney said she remains “hopeful that we can redouble our efforts to commit to an inclusive and sustainable fund as the program evolves.”

Supervisor Kathryn Barger is the only one of the five board members who opposed the legal defense fund. “Our federal immigration system is broken. It is the federal government’s responsibility to support states and counties in their efforts to address the costs of illegal immigration,” Barger said in a statement. “Consistent with my position on this issue on December 20, 2016, county taxpayers should not be forced to bear the cost to provide free legal representation for those facing deportation.”

The money allocated from the justice fund is only the latest in a series of steps the county supervisors have taken to address immigration issues under the Trump administration.

In January, the county supervisors voted to create an Office of Immigrant Affairs to serve as a “one-stop-shop” for immigrants and their families to connect to county services and access legal help for deportation cases.