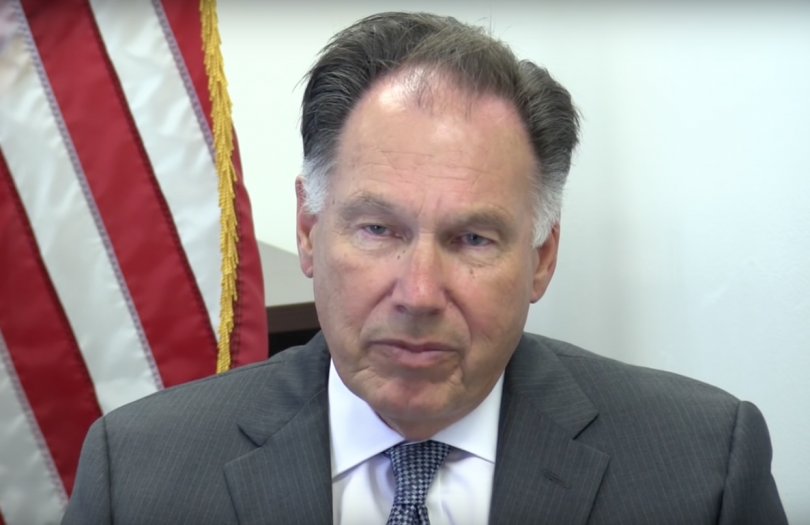 On Monday, Orange County Supervisor Todd Spitzer called on US Attorney General Jeff Sessions to trigger the necessary steps to enter into a consent decree and take over the embattled OC District Attorney’s Office “immediately.”

Spitzer, a former prosecutor, sent his letter the day after CBS News’ 60 Minutes delved into the jailhouse snitch scandal plaguing the OC District Attorney’s Office and the OC Sheriff’s Department.

A Little Background on the Scandal

The DA’s Office and sheriff’s department have been accused of housing inmate informants near defendants in order to procure confessions (in exchange for reduced sentences and other compensation), as well as withholding evidence from defendants. Directing inmates to obtain incriminating statements from defendants is a violation of the 6th Amendment right to an attorney during questioning.

The US Department of Justice and the California Attorney General’s Office are currently investigating the alleged prosecutorial misconduct scandal, which unraveled more than a dozen murder cases going back decades.

On Tuesday, Goethals will start a third round of evidentiary hearings in the Dekraai case. The hearings will focus on determining why prosecutors withheld evidence regarding informants for so long. The judge will also be considering whether the prosecutorial misconduct was so serious that the DA’s Office should be punished by eliminating the death penalty as an option in the Dekraai case.

(For a deeper look at the backstory of the ongoing snitch scandal, dig into this 2015 ABC7 story by Marc Brown and Lisa Bartley. The OC Register’s Tony Saavedra has also been following the scandal since 2015.)

In Sunday’s 60 Minutes segment on the scandal, OC jailhouse informant Mark Cleveland told reporter Sharyn Alfonsi that he took part in an informant program for years. Cleveland says that he and other inmate informants were placed in or near the cells housing defendants being prosecuted by the DA’s Office. The former inmate, who describes himself as a professional “snitch,” says he was arrested more than 100 times, and that his work for the DA earned him a sentence reduction of 40 years. Cleveland says he had access to Rackauckas via telephone. According to Cleveland, the DA praised his work.

60 Minutes also spoke with Rackauckas, who called the informant a liar when presented with Cleveland’s statements. “I think you should assume you’re talking to an informant,” Rackauckas told 60 Minutes. “And if he’s talking, he’s probably lying.”

Rackauckas contradicted an independent panel’s determination that the OC DA’s Office was “a ship without a rudder,” suffering from a “failure of leadership.” In the interview, Rackauckas said the report’s findings differed from what the panel members said to him in private. “You know, it’s interesting they did say those things and they put that in the writing,” Rackauckas said. “But I talked to them personally and they really didn’t have that to say personally.”

The District Attorney says that the it’s “simply not true” that there is a willingness within the DA’s Office to violate defendants’ rights.

60 Minutes also spoke with Assistant Public Defender Scott Sanders, who first brought news of an Orange County informant program to light when he was appointed to represent Dekraai. According to Sanders, the prosecution painted their jailhouse informant as a “good citizen who was looking for nothing in return, didn’t want anything, and was just basically doing this out of the goodness of his heart.”

Sanders says he learned of the informant’s identity, and found that the man had three strikes against him and was desperately seeking a reduced sentence.

Sanders says he was “stunned” when another of his clients facing the death penalty confessed to the same jailhouse informant. “That realization is what propelled us forward,” says Sanders.

“It was just a coincidence,” the DA said.

Rackauckas assured 60 Minutes that there was no informant program, and that his office rarely uses informants because they “are in fact unreliable and everybody knows it.”

Meanwhile, California Assemblyman Reggie Jones-Sawyer (D-Los Angeles) introduced a bill (AB 359) to limit the rewards given to jailhouse informants is making its way through state legislature. The bill was introduced in response to the revelation that two inmates were paid a total of $335,000 over a period of four years for working as informants for law enforcement in the OC, as well as Riverside, San Bernardino, and Los Angeles Counties. The men raked in as much as $3,000 per case from law enforcement agencies. AB 359 would cap all payments to informants at $100 per case.

(The whole 60 Minutes segment is a must-watch.)

In his letter to AG Sessions on Monday, Supervisor Spitzer cited the 60 Minutes segment, as well as several other pieces of “damning evidence of potential criminal actions within OCDA operations under Rackauckas” that have emerged since the DOJ launched its investigation in December 2016.

“Continuing revelations of scandal emerging from the office under D.A. Tony Rackauckas is now beyond critical proportions,” Spitzer said in his two-page letter to AG Sessions on Monday. “I am respectfully requesting that you expand the current Department of Justice investigation into new allegations of corruption and documented misconduct. As it is within your power to do so, I urge you to take control the OCDA office by consent decree.”

Spitzer, who has been advocating greater oversight of the DA’s Office during his time as a supervisor, said he was writing to Sessions “solely on my personal behalf, not for the county or the Board of Supervisors.” Spitzer and Rackauckas have been in a feud since Rackauckas fired Spitzer in 2010. At the time, Rackauckas had reportedly been grooming Spitzer to be his replacement. In response to Spitzer’s letter, Rackauckas’ office issued a statement accusing the supervisor of “slandering prosecutors and OCDA personnel” in order to win reelection.

There are more problems within the DA’s Office than just the snitch scandal, Spitzer said.

The most recent allegation to surface involves a Deputy DA who reportedly failed to turn over exculpatory evidence in a first-degree murder case in 2006. The police report taken at the scene of the crime was destroyed and replaced with a new report that favored the prosecution. Moreover, the prosecutor withheld knowledge of the original report. On May 17, a Superior Court judge ruled that the defendant, who has been behind bars for 11 years, will be retried.

“The District Attorney’s actions have left the County, the courts, the judicial system, and the public no other course of action,” Supervisor Spitzer continued. “I am respectfully requesting that the U.S. Department of Justice expand the current investigation and employ all resources to restore order immediately and halt the continuing decay within our County judicial system.”