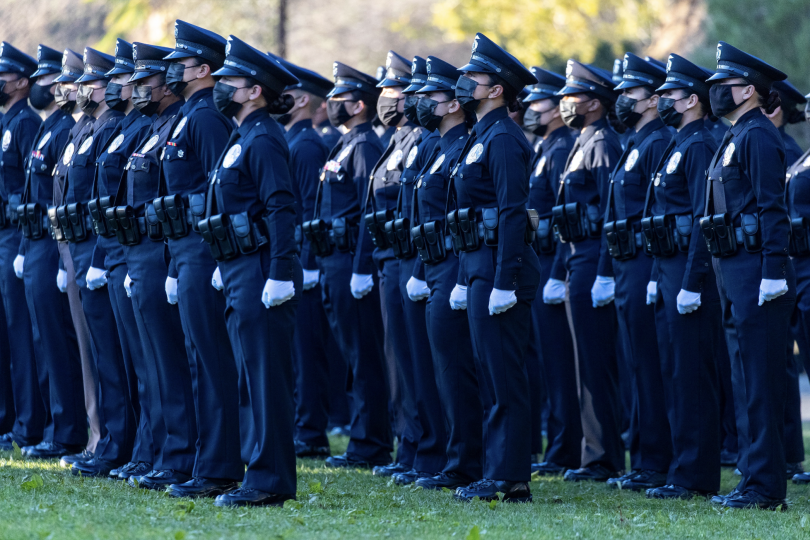 Editor’s Note: On January 1, 2022, Ab 89, the Peace Officers Education and Age Conditions for Employment (PEACE) Act became law in California, setting new requirements for law enforcement recruits. Specifically, the PEACE Act raises the minimum age for new police hires from 18 to 21. This may not be as impactful as it sounds, as fewer than one percent of the state’s law enforcement officers are younger than 21.

Likely more consequential is the bill’s other requirement that the state’s community college system come up with a plan for a “modern policing degree program” by June 1, 2023.

In the op-ed below, Georgia State University researchers discuss the surprising results of their new study, examining what impact higher education requirements for new police recruits have on the rates at which Black people die during police encounters, and the rates at which Black people are arrested. The results of the latter measurement raised alarm bells for study authors Thaddeus Johnson and Natasha Johnson, who say more research is needed to see the full impact of requiring officers to have college degrees.

By Thaddeus L. Johnson and Natasha N. Johnson, The Conversation

Police forces requiring at least a two-year college degree for employment are less likely to employ officers who engage in actions that cause the deaths of Black and unarmed citizens, according to our new peer-reviewed study of data on 235 U.S. city police departments from 2000 to 2016.

Findings from our analysis conducted alongside colleagues professor William Sabol and David Snively, interim police chief in Morrow, Georgia, also revealed that Black citizens were no more likely than white citizens to die during police encounters in places where police are required to have more college education.

Further, no one has really looked at racial differences in the effects of college requirements on police-caused deaths until our study.

Because research into the effects of college requirements on the use of lethal force by police – especially against Black people – is lacking, we analyzed a unique dataset developed from various government and crowd-sourced databases to conduct our research.

This dataset included roughly one-fifth of all documented police-involved fatalities and a quarter of Black people killed by police in the U.S. from 2000 to 2016.

Our results demonstrated that college minimums are associated with as much as three times lower rates of police-related fatalities involving Black people than police forces without a college degree requirement.

These more educated police were also responsible for unarmed citizens dying at a rate two times lower than their counterparts.

Since the early 1900s, public leaders have heralded college-educated officers as ideal candidates.

The assumption is that departments would then be composed of officers who serve communities fairly while reserving potentially deadly actions for only the direst circumstances.

We can only speculate on the underlying reasons for our study’s findings.

But a key contribution of this research is that it clarifies several questions regarding college education policies in law enforcement, making it a valuable tool for police administrators.

For one, our study reveals that an associate degree requirement, at minimum, shows the most promise for reducing the frequency of fatal police encounters.

Next, as evidenced in our supplemental analysis, police agencies trying to reduce fatal confrontations should consider ways to recruit college-degreed applicants while at the same time support college attendance among current officers.

The final point is that the impact of a more educated police force may emerge during only the most dangerous encounters that often precede the use of weapons.

The positive effects of education minimums are clear, based on our research.

But we also made an alarming discovery – Black residents were arrested four times more frequently in cities requiring a college degree for new officers.

Several critical gaps remain in our research on the value of higher education in policing. Available data on police-caused homicides, including the Fatal Encounters data that we used, do not provide reliable information on case dispositions and whether the police actions were justified or not.

Nor do the available statistics tell us anything about police actions that do not result in death.

Ideally, we would examine the actual number of college-degreed officers in police agencies. Such national data remain unavailable.

This op-ed first appeared in The Conversation.

Thaddeus L. Johnson is an Assistant Professor of Criminal Justice and Criminology at Georgia State University.

Natasha N. Johnson is a Clinical Instructor of Criminal Justice and Criminology at Georgia State University.