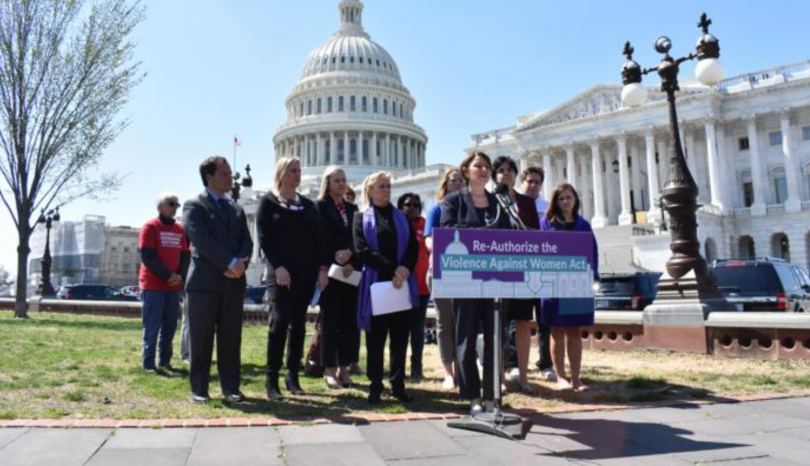 On Monday, May 4, California Attorney General Xavier Becerra and 23 other attorneys general called on U.S. Senate leaders to reauthorize the bipartisan 1993 Violence Against Women Act (VAWA), thus renewing and strengthening critical protections and services for victims of domestic violence — including those left behind by previous versions of the act.

Congress most recently re-upped VAWA in 2013, but reinstatement of the act, which expired in September 2018, is “long overdue.”

Two congressional bills to reauthorize VAWA are currently in play. The House of Representatives’ H.R. 1585, and the Senate’s companion bill, S. 2843. The House passed H.R. 1585 in April 2019, but the Senate has yet to consider its own version.

In their letter urging the Senate to take action, the attorneys general argued that the spread of COVID-19 has made reauthorizing the act all the more urgent, as those experiencing domestic abuse have been forced to shelter with their assailants.

The letter highlighted some of the upgrades to VAWA that the two bills would bring to the table, including provisions for indigenous women and transgender people, and the closure of a problematic loophole.

The bills include provisions meant to address the epidemic of missing and murdered indigenous women and girls. The proposed legislation would expand tribal judges’ jurisdiction to include cases involving non-Native American men accused of abusing Native women.

According to a study funded by the National Institute of Justice, 84 percent of indigenous women in America have been the victims of violent acts. And non-Natives commit approximately 88 percent of violent crimes against Native women.

The jurisdiction issues often mean that those who attack indigenous women and girls on tribal land go unpunished.

“The prevalence of violence by non-Native perpetrators makes preservation and expansion of tribal jurisdiction essential to respect tribal sovereignty to seek justice for Native victims of violence,” the letter from the AGs said.

Both bills would erase the “boyfriend loophole” which has allowed some dating partners convicted of abuse to continue possessing weapons that a spouse who committed the same crimes would not be allowed to keep.

This provision is especially important because victims of domestic violence are five times more likely to be murdered by their abusive partner if their abuser has access to a gun.

To put it another way, every 14 hours, a woman is fatally shot by her intimate partner. That equates to 600 murdered women per year. In fact, women in the U.S. are 21 times more likely to be killed with a gun than women in other high-income countries, according to one study conducted by researchers from Harvard and the University of San Francisco.

The legislation would also prevent people convicted of stalking misdemeanors from possessing or purchasing firearms.

Women are not the only people who pay the price when domestic abusers turn to fatal violence. Children, families, and law enforcement also face mortal danger when abusers have guns. A 2017 Department of Justice report found that in 29 percent of 133 incidents in which police were killed in the line of duty, officers were responding to domestic disputes.

Approximately 47 percent transgender Americans have been sexually assaulted at least once in their lives, 10 percent of whom were assaulted within the last year. And black transgender women face violence at far higher rates than their white counterparts.

Of the at least 26 transgender and gender non-conforming people violently killed in 2019, 91 percent were black women, according to a report from the Human Rights Campaign.

Transgender people in jails and prisons face alarmingly disproportionate rates of violence and sexual assault from other incarcerated people and from facility staff.

While the Prison Rape Elimination Act (PREA), implemented in 2012 (and spottily enforced since then), includes regulations meant to protect transgender and other LGBTQ prisoners, H.R. 1585 would codify those rules.

One of the most prominent protections within PREA requires prison officials to place incarcerated individuals in housing on a case-by-case basis, rather than solely basing such decisions on a person’s anatomy or gender assigned at birth.

These and the other provisions in VAWA are critical tools to aid survivors of domestic violence and to help prevent further victimization, the the attorneys general wrote.

“Reauthorization of VAWA will not end the scourge of gender based violence, but it is an important step toward more fully addressing the tragic epidemic, the AGs’ letter said. We urge you to move quickly to adopt the House-passed bill or the Senate companion sponsored by Senator Feinstein. Women in our states are counting on it.”