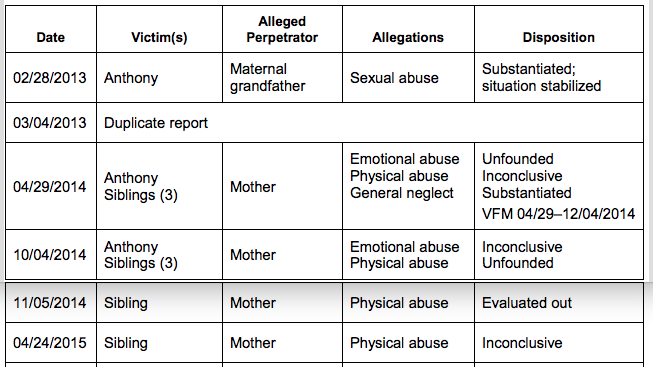 The case of 10-year-old Anthony Avalos, allegedly abused and killed by his mother and her boyfriend Lancaster, nearly two months ago, on June 21, is “very dissimilar to the notorious and awful 2013 death of Gabriel Fernandez,” according to a new report from Judge Michael Nash, head of the Los Angeles County Office of Child Protection.

In June, the LA County Board of Supervisors approved a motion from Supervisor Kathryn Barger to commission a report seeking information on the circumstances surrounding Anthony’s death, especially considering the boy had repeatedly been on the radar of the LA County Department of Children and Family Services.

Five years earlier, in nearby Palmdale, 8-year-old Gabriel Fernandez was brutally and fatally beaten by his mother, Pearl Fernandez, and her boyfriend, Isauro Aguirre, after a handful of people made repeated reports to DCFS that the child was being badly abused.

Gabriel’s death led to the creation of a Blue Ribbon Commission on Child Protection tasked with identifying systemic failures and barriers to child safety. The commission released a report with 55 recommendations that launched much-needed reform efforts in the county’s child welfare system, including the creation of an LA County Office of Child Protection, headed by Judge Nash.

Tuesday’s report, however, said Anthony’s case was dissimilar to Gabriel’s in that there were at least 12 social workers (not including supervisors) involved with the Avalos family, and that those social workers responded to more than a dozen calls from family members and others about suspected child abuse of Anthony and his siblings (including sexual abuse, in Anthony’s case).

The last visit by social workers to check on Anthony was two years before Anthony’s mother and her boyfriend, Kareem Leiva, allegedly murdered Anthony.

“There were frequent consultations among many of the social workers on the multiple incident investigations,” the report stated. “Social workers frequently visited the family home and conducted home evaluations. The children were regularly interviewed, frequently alone, and regularly had their bodies checked for signs of physical abuse.” And, according to the report, the social workers conducted numerous interviews of witnesses, including relatives people at Anthony’s school, neighbors, and law enforcement officers. The social workers involved also found to have appropriately conducted risk assessments to determine whether investigations needed to be elevated into cases.

The department opened cases based on investigations twice, according to the report. “From May 2014 to December 2014, a Voluntary Family Maintenance (VFM) agreement with supervision occurred, the report stated. And the family had its case heard in dependency court from June 2015 through October 2016. During that time, “numerous interviews with the children occurred wherein the children indicated no issues,” Nash wrote in his report. “Numerous persons, including social workers, relatives, service providers, school personnel, and others, reflected no concerns.”

Social workers concluded their final investigation into the treatment of Anthony and his siblings on November 2016. After that, and until Anthony was hospitalized on June 20, and died on June 21, there were no calls to DCFS or law enforcement from teachers, relatives, friends, neighbors, or anyone else expressing concern for the safety of the kids.

In comparison, an elementary school teacher, Jennifer Garcia, testified that leading up to Gabriel Fernandez’s death on May 24, 2013, she contacted an LA County social worker on multiple occasions to report that Gabriel’s mother was physically abusing him. Garcia says she contacted DCFS’s abuse hotline and Gabriel’s social workers several times after the boy would show up to school with scabs on his head, hair missing, and bruises on his face, and reports of his mother punching and shooting him in the face with a BB gun.

Besides the elementary school teacher, relatives, a therapist, and other individuals reported to authorities that Gabriel was being abused between October 31, 2012 and the day he was murdered. Gabriel was reportedly found with multiple injuries, including broken ribs, a fractured skull, and burns all over his body. In addition to being shot with a BB gun and physically beaten, Gabriel was starved, forced to eat cat feces, and tied up in a closet, among other abuses.

In Gabriel’s case, the social workers involved–Stefanie Rodriguez and Patricia Clement, and their supervisors Kevin Bom and Gregory Merritt–were all charged with one felony count of child abuse and one felony count of falsifying public records. According to prosecutors, Rodriguez and Clement falsified reports “that should have documented signs of Gabriel’s escalating physical abuse and the family’s lapsed participation in DCFS efforts to provide help to maintain the family.” The four are still awaiting trial.

Supervisor Janice Hahn said that while Anthony and Gabriel’s deaths may have been dissimilar with regard to how social workers handled each case, the public sees “two little boys who are dead…way too young.” In both cases, Hahn said, “there was a mother involved, a boyfriend involved, and siblings involved.” Anthony’s mother and her boyfriend have both been charged with murder and torture. Gabriel’s mother and her boyfriend were convicted of murder and torture.

The supervisor expressed frustration that so many reports of abuse of Anthony and his siblings were found to be inconclusive or unsubstantiated.

Regarding the lack of contact between social workers and Anthony’s family in the months leading up to the boy’s death, Hahn asked, “Was there ever a thought: “Do we check up?”

Judge Nash said that it was not possible to answer the question of whether or not Anthony might still be alive had social workers done anything differently in his case.

“Understand that there were a lot of efforts in this case,” Judge Nash said to the supes on Tuesday, “whether they worked or not, it’s really hard to say, because once again, the radio silence may or may not have been significant in this particular case.”

While Hahn and others noted that social workers “are truly dedicated” and “certainly don’t go into that line of work to make money,” Hahn said she just couldn’t “help but think that we all failed.”

“We all failed. We all failed Anthony,” Hahn continued. “And I think we have to start there to make any meaningful changes.”

Bobby Cagle, who formerly led Georgia’s child welfare system, has been head of the Department of Children and Family Services for 8 months, so far. Anthony’s case is the first high profile death since Cagle’s hiring.

In the wake of a handful of high-profile deaths of Georgia kids involved in the child welfare system, Cagle oversaw increases in foster care placements.

Some advocates have expressed concern that another high-profile death could trigger a reactive pendulum swing of LA County’s foster care policies, which could, in turn, cause children to be removed unnecessarily from their families in an effort to prevent future tragedies.

In fact, foster care numbers did rise after Gabriel Fernandez’s death. But then-DCFS Director Phillip Browning said he believed that the public, shocked by the circumstances of the 8-year-old’s violent murder, called in thousands more reports of child abuse than before.

Supervisor Mark Ridley Thomas said he found revisiting the issue of whether the county could have saved Anthony to be “disturbingly similar” to Gabriel’s case. “I think the real challenge for us is to determine whether or not we’ve arrived at a semblance of best practices—not simply promising practices, but how much progress have we actually and substantively…made?”

While Nash’s report said that it wasn’t possible to say whether social workers could have done anything differently to prevent Anthony’s death, the report included eight recommendations for DCFS reform.

The report calls on the department to increase collaboration between DCFS and local law enforcement, as well as further reduce caseloads, which “still remains a system issue,” despite the hiring of additional social workers at the behest of the blue ribbon commission in 2014. The county should also beef up training for social workers and law enforcement who interview kids “with particular emphasis on how to evaluate and further investigate when children provide inconsistent statements or retract previous statements of abuse or the lack thereof.” Additionally, DCFS should better develop social workers’ investigative skills who “need to understand that investigating allegations of abuse or neglect means they are gathering facts or evidence that may actually be used in a court case, criminal or dependency,” according to the report.