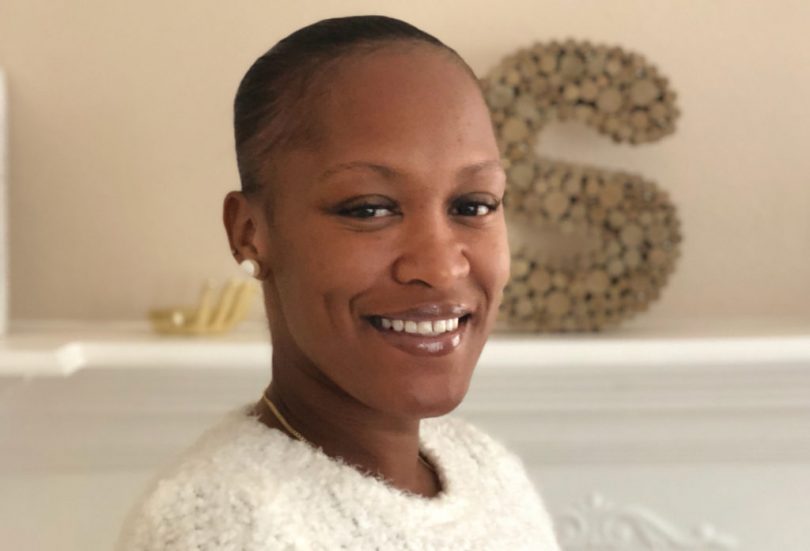 Starcania Ford’s first call came not too long after she had completed two months of background checks and trainings.

Could she come and pick up a young man waiting at the juvenile delinquency court near downtown Los Angeles?

Jonathan* had come to the court with his aunt for a hearing on a violation of the terms of his probation, but she had abandoned him there. Now, the Los Angeles County Probation Department — which oversees nearly 10,000 youth in the county’s juvenile justice system — was hoping that Ford would take the 17-year-old into her home.

“They called me that day, after calling about 30 other places,” Ford said.

Ford said Jonathan pleaded with his social worker not to be sent to a shelter, often the option of last resort for many older youth.

“The last phone call was to me,” Ford said.

Later that day, Jonathan came to her with only one pair of pants, one shirt and one pair of underwear.

“When he first came, he was cussing, throwing up gang signs almost every day,” Ford recently recalled at her home, located just east of Los Angeles County, in Fontana. “He didn’t want to do his work or sometimes he wouldn’t go to school.”

But after some tense moments, Ford was able to win over the skeptical youth, who had already been through 11 other foster care placements, she said.

“I told him ‘If you want to live here, you have to abide by my rules, which means getting your education,’” Ford said. “After a while, he saw that I cared for him so much and that I would fight for him.”

Ford, 38, who lives with her adult daughter, is the only licensed foster parent for probation youth in L.A. County. She’s part of a state initiative that has seen probation departments across the state jump headlong into the business of finding foster parents. The goal is to keep some probation youth out of lengthy stays in group homes and live instead in family homes.

Moving Away from Group Homes

There are about 2,700 foster youth overseen by probation departments in California, according to one tally from October 2017, a relatively small number compared to the roughly 60,000 children placed in foster care in the state. These “probation foster youth” are placed in care subsequent to adjudication in a juvenile delinquency court, after which abuse or neglect has been established in their homes.

While most youth on probation return home after spending time in a juvenile hall or detention camp, those who cannot go back to their families are largely sent to live in group homes.

But in recent years, a growing consensus on the harmful effects of living in group homes —such as lower educational achievement and greater likelihood of future arrests – have solidified the push to place children in family homes whenever possible.

In 2015, California embarked on a series of reforms to its foster care system with the goal of placing more children with families and fewer in institutional settings, like group homes. Known as Continuum of Care Reform (CCR), that effort has resulted in a $104 million statewide initiative to recruit more caregivers for foster children in counties across the state.

But finding more foster parents is now not just the responsibility of child welfare agencies. Under CCR, county probation departments are now also charged with recruiting foster parents for some youth under supervision.

So far, placements in a family setting for probation foster youth are relatively rare. According to the most recent data from California’s Child Welfare Indicators Project, 86 youth are living in a home with a relative or family friend. Twenty-five probation youth are placed with foster families, including 15 through private foster family agencies. Just 10 youth are currently placed with foster care programs overseen by counties in the state.

In L.A. County, A $5 Million Question

The state has distributed $15.6 million to probation departments across the state this fiscal year to increase the supply of foster parents, including $5 million to L.A. County, which is home to 550 of the state’s 2,700 probation foster youth.

So far, spending that money has been a challenge. Los Angeles has only spent about $300,000 of its allocation, according to Lisa Campbell-Motton of the L.A. County Probation Department, often because of the county’s stringent procurement process and rules that mandate a lengthy bidding process.

Last year, the department spent $200,000 of the $5 million allotment on supporting youth placed with relative caregivers. In early 2017, a commercial that cost about $100,000 ran on Time Warner cable channels late at night in the Southern California area.

That brought in 15 leads from interested families last year, but only one has made it through the approval process so far — Starcania Ford, the foster mother from Fontana.

Later this spring, Campbell-Motton said the L.A. County Probation Department will embark on a $3 million campaign to bring more foster parents for probation youth into the fold through billboards, commercials on television and radio and outreach at local churches. The goal is to find families for about 50 youth without any family.

In the past, L.A. County has seen five youth find permanency through adoption, far and away the most of any county in the state. But now, it is seeking to create many more opportunities for youth to stay in a family-like setting instead of languishing for long stretches in group homes.

But the new mandate to find foster families has left many counties scrambling to build capacity to serve these youth. For many probation departments in the state, it has meant learning to collaborate more with child welfare agencies and partnering with private foster family agencies.

Learning to Overcome a Stigma

Part of the difficulty is that many of the probation foster youth are teens, generally the hardest group to place in foster home settings, even without a criminal record.

“It’s a challenge to find homes for delinquent teenagers,” said San Luis Obispo probation chief Jim Salio, who is president of the Chief Probation Officers of California. “That’s not really what [caregivers] signed up for when they thought about being foster parents. They’re usually thinking about the younger children when they think about fostering.”

“One thing they wonder is if they’re always going to have a probation officer roaming around their house, maybe looking to arrest other family members,” she said. “We put them at ease and tell them that our probation officers wear a social worker’s hat, not a harsh law enforcement hat.”

But the biggest issue that probation departments are contending with is the stigma of taking in youth who have been arrested.

“A lot of people just see probation tag and they think gang members, murderers, rapists,” said Campbell-Motton, director of Probation Child Welfare for the L.A. County Probation Department. “We show [caregivers] pictures of them playing with dogs, and we let them know that they’re just like every foster kid. They’ve just made a mistake and most of the mistakes they’ve made aren’t crazy things. They just need to be forgiven and they need someone to love them in spite of what they did.”

That’s a big part of why Ford signed up to become a foster parent to probation youth.

Last year, Ford found herself surfing L.A. County’s website in search of job opportunities. She came across Forever Friends, a new program offered by the Probation Department that matches youth living in group homes with volunteers who would be willing to build long-term personal relationships with them.

Volunteering led Ford to want to take the experience even further. The children Ford met at the group home seemed like many of the foster youth she knew. But because of their early involvement with the justice system, opportunities for them to live with a family seemed slim.

“I want to give them a second chance, and not judge them on the crimes they committed and try to see if I can give them a family and help them along the way,” Ford said.

Ford is actually no stranger to fostering teens. She took in her niece and nephew about a decade ago when both were placed into foster care and had been staying in group homes. She also experienced homelessness as a young mother.

“I was there with my children,” Ford said. “Once I was able to find stability, I never looked back, but I knew there were people I wanted to help.”

Jonathan left her home after turning 18, and she now fosters Kenneth,* a 14-year-old who has been staying at her home since the end of November. Before that, he spent about a year and a half in a group home in South Los Angeles.

Taking in both youth has been more challenging than Ford first thought. The $923 a month she receives from the county as part of its basic care rate for resource families doesn’t always go as far as she would like.

Probation staff didn’t disclose much about the youth before placing them in her home. Only after they came to stay with her did Ford grasp the persistent behavioral issues faced by the two youth. Ford said that L.A. County’s Probation Department was slower to link her with therapy and wraparound mental health services with Kenneth.

Another obstacle has been child care, even though Kenneth is 14 years old. “I’ve missed a lot of work because he cannot be at home alone,” Ford said. “He’s so young and so fragile.”

This Thanksgiving marked their first holiday together.

*Because of the age of the youths in the story, their names have been changed to protect their privacy.