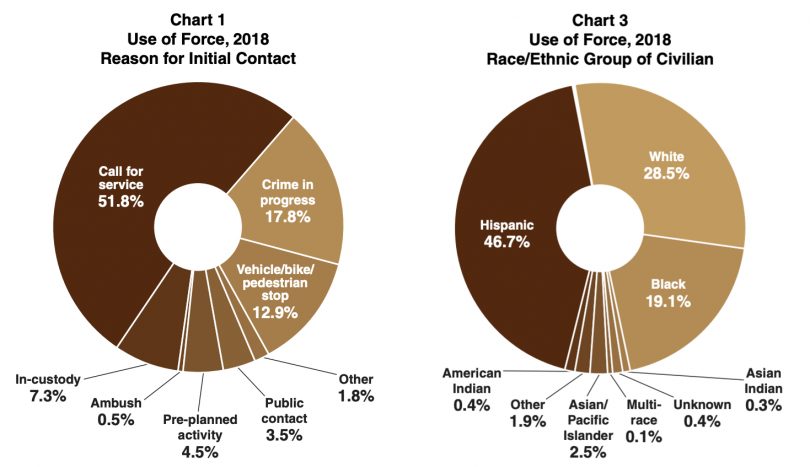 Police used force during encounters with civilians significantly fewer times in 2018 than in the previous two years, according to a new California Attorney General’s Office report released Tuesday.

The public data report is part of the CA Attorney General’s transparency initiative, OpenJustice. In 2015, then-Attorney General Kamala Harris launched the OpenJustice data portal website to bring transparency to the state’s justice system by publishing crime and policing statistics. In 2016, Governor Jerry Brown signed a bill that made the site a one-stop-shop for the electronic collection and public reporting of data on crime and officers uses-of-force, as well as data on incidents in which civilians shoot cops.

According to the latest report, there were 628 uses-of-force in 2018–54 fewer than two years ago, in 2016, when officers engaged in 782 force incidents, and 79 fewer than 2017’s 707 incidents. The third annual DOJ report on the issue define uses of force as instances in which police discharged weapons and/or used force that resulted in serious bodily injury or death of a civilian or officer.

Of the 677 civilians involved in incidents in which police discharged their weapons last year, 62.5 percent (423) were injured and 15.5 percent (105) were not injured.

A total of 146 civilians (21.6 percent) died during confrontations with the police. During the prior year, there were 26 more civilian fatalities.

According to the report, three officers of the 1,552 officers involved in use-of-force incidents died in 2018, one more officer than in 2017, but a considerably lower number than the eight officer deaths that 2016 saw.

A total of 255 officers (16.4 percent) sustained injuries during these incidents, while 1,294 (83.4 percent) were physically unharmed.

Approximately 50.4 percent of officers who used force did not receive force from civilians, an increase over the 43.7 percent of incidents involving civilians using force in 2016, and the 39.3 percent in 2017.

The report was joined by four others offering 2018’s data on overall crime, homicides, hate crimes–all of which experienced decreased numbers–as well as juvenile justice.

According to the state’s data, the homicide rate across all counties dropped by 4.3 percent in 2018, over the previous year.

The statewide robbery rate fell at a similar rate, by 4.5 percent, last year.

WitnessLA will dig more deeply into these statistics in the coming weeks. Stay tuned.

“Good policy is rooted in the facts,” said Attorney General Becerra. “With the reports released today, legislators, academics, journalists, and other members of the public will now have the most recent data on our criminal justice system to inform their work. At the California Department of Justice, we know that transparency is an important component to promoting accountability and enhancing trust between law enforcement agencies and the public they serve.”