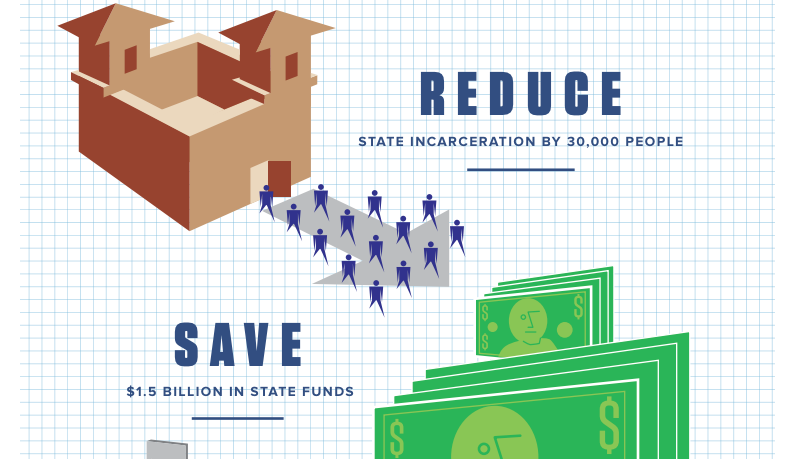 A new report outlines strategies the state of California could employ that would reduce its prison and jail populations by 30,000 and save approximately $1.5 billion in prison spending.

In 2016, there were over 200,000 people were locked in California’s prisons and jails. According to the report, lowering the incarcerated population by 30,000—by reducing the length of prison time for the majority of inmates by 20 percent—would make it possible for the state to close five prisons.

The report, by the non-profit Californians for Safety and Justice, suggests that money saved could be invested in preventative community programs and victims’ services.

One-and-a-half billion dollars could go a long way toward expanding treatment for people with severe mental health challenges and addiction, increasing the use of diversion, and opening up housing for chronically homeless individuals who cycle in and out of lockup, according to the report. The money could also be used to support survivors of crime by opening new trauma recovery centers and facilitating restorative justice programs. Additionally, the money could go toward second chances for the formerly incarcerated who have reentered their communities. This goal, which would also reduce recidivism, could be accomplished via employment programs for people with convictions and/or “clean slate” assistance programs that would break down barriers for people with convictions, and help them achieve stability, according to the report.

A December report from the Brennan Center for Justice came to a similar conclusion as the Californians for Safety and Justice report. It estimated that 39 percent (576,000) of the US prison population was behind bars “with little public safety rationale.” According to the report, these individuals could be sentenced to shorter prison terms, or to an alternative to incarceration “with little impact on public safety.” Releasing nearly 40 percent of the national prison population would save the US nearly $20 billion each year, according to the Brennan Center. (Read the report for more information on how the Brennan Center researchers weighed crimes and other factors to come to these numbers.)

This deincarceration goal is entirely achievable, according to Todd Clear, a criminal justice professor at Rutgers University, and James Austin, a nationally respected corrections expert and President of the JFA Institute. (In 2012, Austin presented a report to the Los Angeles County Board of Supervisors with a detailed plan to lower the county’s jail population enough to shut down the crumbling Men’s Central Jail.)

In their chapter, Clear and Austin point to New Jersey and New York, which have both reduced their prison populations by one-third since 1999, and California which has reduced its number of prisoners by one-fourth since 2006. These states, the experts wrote, show that “large—meaningful—reductions in the number of people in prison can be accomplished without endangering the public.”

In addition to the 25 percent reduction in the population of state prisoners, California experienced an average drop of 10 percent among county jail populations, a 64 percent reduction in the number of people under state supervision, and a 22 percent drop in the number of felonies filed in courts each year. The state has become a model for criminal justice reform over the last few years through recent state laws like Propositions 36, 47, and 57 as well as Public Safety Realignment, and myriad other legislative reforms.

In 2011, Realignment (AB 109) shifted responsibility for certain low-level offenders away from California’s state prison system to the states’ 58 counties.

Prop. 36, passed in 2012, reformed the state’s Three Strikes law, narrowing the offenses that could qualify as a third strike (which could send people away for 25-to-life) to serious or violent felonies.

In 2014, Prop. 47 downgraded six low-level felonies to misdemeanors. Savings achieved by the reform is allocated for mental health and drug rehab programs for criminal justice system-involved people, efforts to reduce truancy and help at-risk students, and for victims services. (Californians for Safety and Justice was one of the groups behind this legislation.)

Prop. 57, once fully implemented, will increase parole eligibility for non-violent offenders who have completed the base sentence for their primary offense, and boosts access to early release “good time” credits. Prop. 57 also takes the power to transfer kids to adult court out of the hands of prosecutors and gives the control back to judges.

Despite these welcome reforms, there is still much work to be done to address major criminal justice system flaws, particularly with regard to the state’s incarceration rate and prison spending, according to Californians for Safety and Justice.

The report recommends integrating mental health services and crisis intervention in emergency response practices. “Police are frequently the sole first responders called to handle complex social challenges that they alone are ill-equipped to resolve,” the report states. “Emergency services can be expanded to provide a first response alternative to law enforcement through 911 dispatch that is mobile, accessible 24/7 and staffed by first responders trained in mental health and crisis intervention who can intervene and de-escalate situations without making an arrest.” According to the report, on any given day, there are approximately 5,000 individuals held in areas of jails designated for people with mental health problems. Many of these individuals could be better served by treatment services within their communities, the report says.

Californians for Safety and Justice also recommends expanding pre-booking diversion options, like Law Enforcement Assisted Diversion (LEAD), through which officers send people with mental health or substance abuse issues who have committed low-level crimes to community-based services, rather than arrest them.

The report also recommends setting shorter probation terms, when appropriate. Last year, there were more than 190,000 people serving an average of three years of probation for felony convictions. Research shows, however, that people are more likely to recidivate in the first few months after their release from prison. Moreover, the public safety benefits of probation decrease after the 15-month mark, according to the report. Thus, “frontloading resources within the first six months to a year of supervision and shortening sentence lengths overall will promote positive safety outcomes,” the report states. Probation departments should also implement graduated responses to probation violations, so that technical violations like failing to pay fees or missing probation appointments do not necessarily mean a return to prison.

The report also recommends doing away with mandatory sentencing enhancements, and giving judges more discretion to decide sentence-length. Sentencing enhancements add time to sentences beyond the base term, for things like prior convictions, using a firearm, shooting from a car, gang affiliation, and more. These enhancements can turn a sentence of a few years into one of multiple decades, and disproportionately affect poor and minority people.

According to the report, approximately 80% of California prisoners are serving time that includes a mandatory enhancement.

“One study found that incarceration for any longer than 20 months has minimal to no effect on reducing recidivism upon release,” the report says. “Another study found that the ideal sentence length to ensure accountability and minimize recidivism for serious crimes such as robbery and burglary was about 14 months: any longer actually increased the likelihood the person would return to committing crimes upon release.”

The report also recommends granting parole to more low-risk prisoners. California Department of Corrections and Rehabilitation data shows that nearly half of the state’s prison population (48 percent or 63,000 individuals) have a low risk of reoffending. The report recommends the state work to evaluate these low-risk inmates for possible earlier release. “If only 10% of the individuals currently assessed as low-risk were evaluated and released, that would reduce California’s
prison population by about 6,300,” the report states. In addition, inmates with indeterminate sentences should have the opportunity for earlier parole consideration based on completion of rehabilitative programs and education, the report says.

“There has never been a more important time to achieve this vision,” the report concludes. “As long as the state continues to overspend on prisons, the unresolved drivers of crime will continue to plague vulnerable communities. Concrete and bold steps must be taken over the next five years to build out new safety priorities rooted in community health and wellbeing. ”