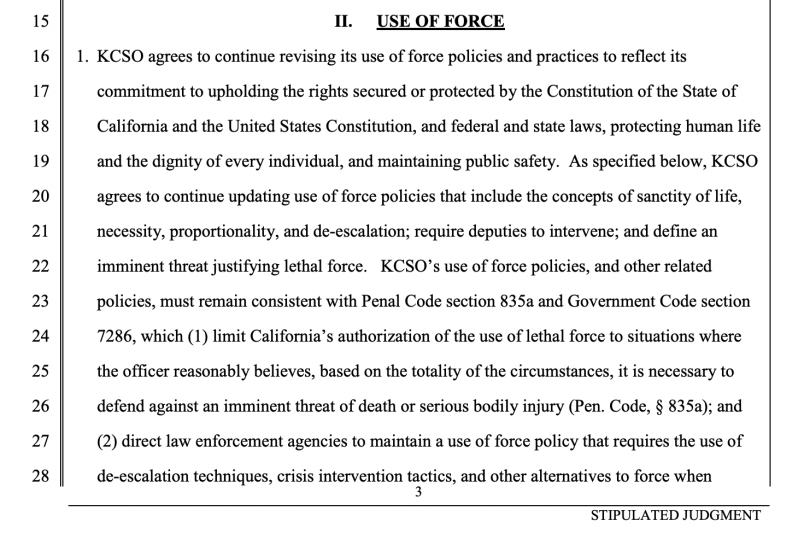 In 2016, the California Attorney General’s Office launched an investigation in response media reports, and complaints from community groups and individuals that in the desert just north of Los Angeles, the Kern County Sheriff’s Office had an excessive force and misconduct problem.

The investigation took four years to complete, and concluded that the sheriff’s office was engaging in unconstitutional policing practices. The department, the AG concluded, was “using unreasonable force, especially with respect to use of its canines,” as well as “engaging in unreasonable stops, searches, arrests, and seizures,” and failing “to exercise appropriate management and supervision of its law enforcement officers.”

And on Tuesday, December 22, the California Department of Justice announced that it had reached a settlement with the Kern Sheriff’s Office, featuring a five-year reform plan that Attorney Gereral Xavier Becerra hopes will usher the agency into what is becoming “a new era for policing in America.”

The sheriff’s office has, according to the attorney general, spent the last few years working on various improvements, among which have been the roll-out of body-worn cameras and additional training for deputies. Yet, law enforcement’s treatment of communities and families has been egregiously bad over the years, according to Kern residents and community organizations.

Law enforcement officers in Kern County, including members of the Bakersfield Police Department, killed more people per capita than any other county in the United States in 2015, according to an investigation by The Guardian.

A 2017 report from the ALCU of California revealed that a majority of Kern deputies’ shootings between 2009 and 2017 involved individuals either unarmed or armed only with a knife.

“In recent years, Kern County Sheriff’s deputies shot and killed considerably more people than law enforcement agencies in areas of equivalent population sizes,” the ACLU wrote. “And the Bakersfield Police Department had the highest rate of police homicides per capita of the country’s 60 largest police departments.”

Kern residents alleged sexual assault and harassment at the hands of deputies, saying they were molested, and then quickly and quietly paid off.

When the victims reported the misconduct, sheriff’s officials offered the women a small amount of money, a few hundred to a few thousand dollars, to keep quiet and waive the right to sue the department, according to the women. When an accuser didn’t immediately accept the cash, the offered sum would grow into the thousands — still a far cry from the millions many of the women would have received by successfully suing the Kern Sheriff’s Office.

The local sheriff has on several occasions generated his own trouble.

In 2018, the local deputies union posted a video of Kern County Sheriff Donny Youngblood speaking to a group of rank-and-file officers during his first campaign for sheriff in 2006. In the video, he tells his audience that it is “better financially” to kill, rather than injure, suspects.

“You know what happens when a guy makes a bad shooting on somebody and kills them? Three million bucks and the family goes away after a long back and forth,” Youngblood said. When Youngblood asked officers if whether it was a better financial move for the county “to cripple them or kill them,” an unidentified man replied, “kill them.”

“Absolutely,” said Youngblood. “Because if they’re crippled, we get to take care of them for life. And that cost goes way up.”

Accountability and transparency “are drivers of today’s reform,” said Attorney General Becerra on Tuesday. “And many in law enforcement in California are accepting the challenge.”

The settlement with the Kern Sheriff’s Office,” he said,  “is a critical step in helping rebuild trust and partnership in Kern County. It won’t happen overnight, and we’ll all have to stay on task. But, these are the steps our communities want to see us launch for safer neighborhoods.”

Tuesday’s settlement features a five-year plan through which the sheriff’s office is directed to implement a range of reforms, including rethinking the department’s use-of-force policies.  Specifically, the AG’s Office wants to Kern to prohibit the kind of restraints that create a substantial risk of positional asphyxia. The state’s top cop also wants Kern officers to intervene when they see a colleague using excessive force, and to limit the use of K9s.

Kern Sheriff’s officials are also called on to improve the release of public information after significant uses of force against civilians, in-custody deaths, and other significant events.

In addition, the settlement will  require the department to boost use-of-force training and data reporting, to conduct a biennial community survey, and to address the department’s practice of improperly conducting investigatory stops and searches.

“KCSO will reiterate, train, and emphasize that all investigatory stops, seizures, and searches are conducted in accordance with the rights, privileges, and immunities secured or protected by the Constitution or laws of the State of California and the United States,” states the settlement.

“KCSO will reiterate, train, emphasize and continue to ensure that investigatory stops and searches are part of an effective overall crime prevention strategy, do not contribute to counter-productive divisiveness or tension between KCSO and the community, and are adequately documented for tracking and supervision purposes.”

WitnessLA will continue to check in on Kern, to see how things are going with the new settlement.