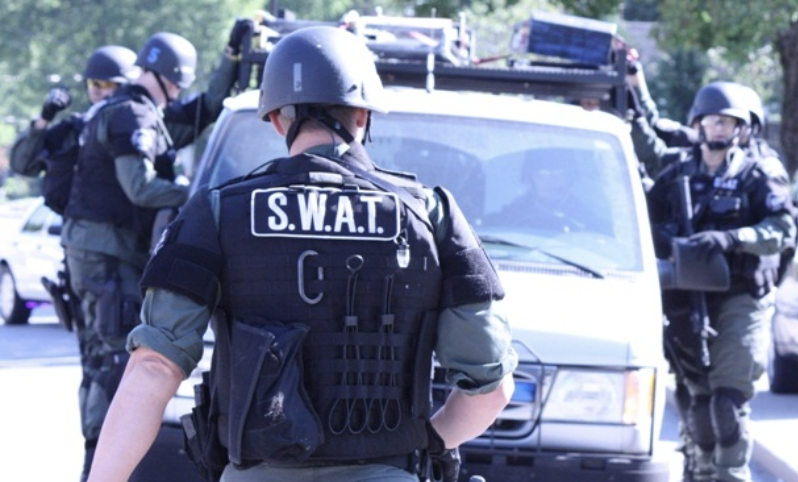 Editor’s Note: In California, search warrant-bearing law enforcement officers seeking entrance into a residence or business must knock and announce their presence and purpose. If the occupant refuses the police permission to enter, or if no one is home, officers can break in to execute the search. Police can conduct so-called “no-knock” (surprise) raids under certain “exigent” circumstances, including when officers have a “good faith” reason to believe that if they announce their presence, they may endanger themselves or that the occupants may destroy drugs or other evidence that the police are hoping to find.

Emmanuel Remy and his children looked out of their Columbus, Ohio, home window one morning last November to see a dozen tactical officers in their yard.

The officers were preparing to serve a warrant for the previous residents — suspected drug dealers. In the five months since Remy had bought the property, detectives already had shown up with warrants three times. The officers’ early morning attempt, this time with a battering ram, showed him how wrong warrants can go.

“They didn’t even do a simple address search to see that the property had transferred,” recalled Remy, a Democratic member of the Columbus City Council.

Then in March, a Louisville, Kentucky, police officer shot and killed Breonna Taylor, a 26-year-old Black woman, during a late-night raid at her apartment on suspicion that another person kept drugs there.

Amid national calls for policing changes, Remy decided to sponsor a city ordinance to limit no-knock warrants, the kind that police obtained to enter Taylor’s home. The council unanimously passed it, and the mayor signed it.

Now Columbus police officers can use no-knock warrants only for higher-level felonies. The police chief must approve all requests. Officers must conduct at least two hours of surveillance beforehand. And body-worn cameras must be activated.

“We determined that it was probably a tool they needed access to,” Remy said, “but there were enough safeguards in place that it wouldn’t be frivolously done.”

Like Columbus, more than two dozen state and local jurisdictions have introduced or finalized policies to restrict the use of no-knock warrants since June. Virginia could join Florida and Oregon in banning the practice entirely, if the governor signs a recently approved bill.

“This legislation, it allows [Breonna Taylor’s] name, her story to literally be a catalyst of dismantling systems that have been in place and have been causing harm to our, by ‘our’ I mean Black and brown, communities,” said Virginia state Del. Lashrecse Aird, a Democrat who introduced the bill.

But some lawmakers and police groups oppose banning no-knock warrants, saying they are useful in dangerous situations.

No-knock warrants became a popular policing technique in the late 1980s. The warrants, typically issued by a judge, allow law enforcement to enter a home without notice to anyone inside. This practice can give police two major advantages: One, a suspect can’t hide evidence. Two, a suspect is less likely to be ready with a weapon.

But even with those advantages, the warrants have been dangerous — for both residents and law enforcement.

The Taylor case was a tragic example. Although a judge approved a no-knock warrant, the officers claim they knocked and said “police” before using a battering ram to get into Taylor’s apartment. Inside, her startled boyfriend fired a gun at the officers, injuring one. Officers shot back, striking Taylor multiple times, killing her. Taylor’s boyfriend later said he didn’t hear any announcement from the officers and thought they were intruders.

Since Taylor’s death, lawmakers in 10 states have introduced or pre-filed legislation to ban or restrict no-knock warrants. A handful of local jurisdictions are discussing it. And at least 13 local governments or police departments — from Baltimore to Killeen, Texas — have banned the warrants or restricted their use.

“Much of the problem is … what we call quick-knock warrants,” said Peter Kraska, a professor at Eastern Kentucky University’s School of Justice Studies.

For example, Kraska said, officers could knock but enter a home right away, thereby potentially creating the same risks as a no-knock warrant. And there are situations when being able to enter a home without knocking could be essential, he said, such as when officers are dealing with an active shooter.

“At the end of the day, any kind of warrant service tends to be dangerous, period,” said Thor Eells, executive director of the National Tactical Officers Association, a 40,000-member organization in the United States and Canada that trains police units. “The question is: What actions can law enforcement take to reduce that risk?”

Virginia Democratic Gov. Ralph Northam has received the bill that would ban no-knock warrants, and his deadline for action is midnight Wednesday, spokesperson Alena Yarmosky said in an email.

Beyond the no-knock provision, the bill also would prevent police from using any warrant during the night without approval from a judge.

Aird, the delegate who introduced the measure, said she also proposed requiring officers to wait 30 seconds after knocking before entering. That provision didn’t make it through negotiations, but she still considers the legislation progress.

Most Republican lawmakers and some police groups opposed the bill in the Democratic-controlled House and Senate.

Republican Sen. Ryan McDougle, who voted against the legislation, said it was too broad.

“What we’ve done is put in place procedures that will affect all search warrants when they were trying to get at one kind of warrant,” he said.

McDougle, a former state prosecutor, said the proposed changes might place law enforcement officers at risk and give suspects time to dispose of evidence. He also criticized the requirement limiting warrants to daytime without special permission. “Crime does not stop just because the sun goes down.”

The Rise of Warrants

Generally, states and localities do not report how often warrants of any type are used.

Utah appears to be the only state that tracks and shares such information, after the state legislature began requiring it in 2014. The next year, legislators approved another law banning no-knock warrants for low-level drug crimes. About a quarter of nearly 400 warrants served in 2019 were no-knock warrants; nearly all the others were knock-and-announce warrants.

Maryland similarly tracked the warrants from 2010 until 2014, when legislation requiring the reporting expired. In 2014, SWAT teams used a forcible entry during 73% of 1,572 search warrant deployments, although the report doesn’t differentiate among types of warrants. An attempt in 2015 by lawmakers to keep the tracking going died in committee.

Nationally, the use of no-knock warrants has grown to roughly 60,000 a year, according to Kraska, the Eastern Kentucky University professor, who has been researching warrants since the 1980s.

Ideally, he said, no-knock warrants should be limited to extreme circumstances and not used for low-level drug offenses, as most are. The American Civil Liberties Union found in a 2014 report that, nationally, about 60% of no-knock raids were used for suspected drug offenses.

“The real impact is to take the political momentum that’s going on right now in jurisdictions all over the country,” he said, “and try to get them to put in place legislation that will substantively stop or rein this stuff in significantly.”

Warrants can be dangerous for everyone involved. The New York Times reported SWAT-style tactics with both no-knock and knock-style raids led to nearly 100 deaths (81 civilians and 13 officers) from 2010 to 2016.

Kay Levine, a law professor at Emory University, said more cases like Taylor’s could happen because of rising gun ownership and the related “castle doctrine,” or common law principle that allows a person to use deadly force for protection against a home intruder.

In most jurisdictions, court precedents or state laws allow for the castle doctrine, according to Giffords, a San Francisco-based organization that promotes gun control. Twenty-seven states have related stand-your-ground laws, which allow individuals to use lethal force as a first choice instead of a last resort. The legislation has been pushed by gun advocate groups such as the National Rifle Association.

“Given the collision course that we are on, with the extent that people have firearms in their house and the castle doctrine,” Levine said, “the policy implications of continuing to allow officers to do no-knock warrants is deeply problematic.”

Even some in the policing profession are aware of the warrants’ potential for harm. Eells of the National Tactical Officers Association said that in the mid-’90s he and others in the association began noticing officers were being hurt or killed serving no-knock warrants.

“As we studied it, we don’t necessarily believe that’s the safest way to accomplish our mission,” Eells said. However, he opposes banning the practice.

“Do I believe that this knee-jerk reaction to prohibit no-knock warrants is the right answer? The answer is categorically no.”

Change at the Local Level

Patton Township, Pennsylvania, is another community considering changing its warrant policy. The township is in Centre County, home to Penn State University.

Ben Jones, one of the township’s nearly 16,000 residents, put together a proposed policy that would restrict no-knock and quick-knock raids. Under it, law enforcement officers would need to knock, announce themselves and wait at least 15 seconds before opening a door to serve a warrant. The proposed policy, which township leaders will next discuss in November, would make an exception for situations when police think there’s an imminent threat of death or serious injury, including rape.

Jones, who also is assistant director of Penn State’s Rock Ethics Institute, modeled the measure in part after a bill from a Pennsylvania state senator. That bill, which is in committee, would ban no-knock warrants.

“For so long, at the federal and state level there’s been a failure to put in place strong policies to avoid unnecessary police violence,” Jones said. “It’s all that more important to make changes at the local level.”

Back in Columbus, Councilmember Remy said he got some criticism from city residents who wanted his measure to go further.

“There were certainly people who felt [no-knock warrants] should be banned outright,” he said.

But the policy seems to be off to a good start, Remy said. In 2019, police served 93 of 331 warrants without a knock. In the few months since the new ordinance, the chief has been presented with two no-knock warrant requests.