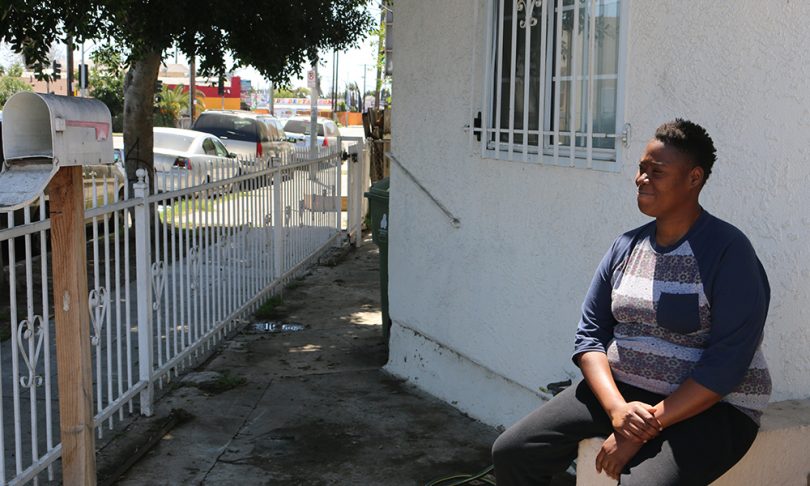 Doniesha Thomas is in her bedroom, crouching on the floor and peering into a pet carrier that appears empty. “He’s in there, all the way back,” she said, reaching in to find the kitten she rescued from a nearby vacant lot the day before, though she says she dislikes cats.

Thomas’ bedroom is in her house. Her house, rented in her own name. It’s a single-family dwelling in south central LA that she shares with her fiancé and a roommate.

Not long ago, Thomas, 23, was homeless. It took her about two years after aging out of California’s extended foster care program, which extends certain foster care benefits through age 21 to young people who had open dependency court cases when they turned 18, to find stable housing. During that time, she couch surfed at friends’ and extended family members’ houses, sometimes sleeping in friends’ cars.

She was not alone in her struggle to secure housing. The number of people experiencing homelessness in Los Angeles County has skyrocketed by 75 percent over the past six years. Close to 58,000 men, women, and children lacked stable housing in 2017, according to the Los Angeles Homeless Services Authority. Doniesha Thomas with a kitten she rescued from the street the day before, by Caleigh Wells

It’s a crisis so staggering that the subissue of foster youth aging out of the system without a place to live “has gotten lost in the larger conversation around homelessness in LA,” said Nisha Kashyap, staff attorney at the Alliance for Children’s Rights. “That problem is so dire and so large in scope. But what’s important to remember is that youth in foster care have a right to placement. We would not accept it if 10- and 12-year-olds in foster care were languishing in shelters and sleeping on friend’s couches, but for our 19-year-olds it’s OK?”

Why the pipeline exists

In 2016, the most recent year in which Los Angeles Homeless Services Authority gathered data about foster care histories during their annual homeless count, about 36 percent of chronically homeless youth in LA County said they were involved in foster care at some point in their lives, according to data provided by LAHSA. The wall hangings above Doniesha Thomas’ bed. She shares her rental home with her fiance and a roommate, by Caleigh Wells

Marissa Espinoza, senior vice president of Covenant House California in Hollywood, which helps homeless people ages 18-24 find short- and long-term housing, said that consistently 50 percent of the kids who come to them report some experience with the foster care system on their intake forms.

Though the existence of a foster-care-to-homelessness pipeline in LA is a given in some advocacy circles, exact numbers of how many youth who age out of county care experience homelessness are hard to come by.

Former foster youth — or any youth — who lack a consistent, supportive adult who has their back have their work cut out for them in creating a stable life for themselves. In Los Angeles, that work is perhaps more exacting than in cities that aren’t in the midst of a housing crisis.

“We are seeing a severe lack of available appropriate places for [youth in extended foster care] here in LA County,” Kashyap said. There are so few other options for housing, such as living with a foster family or in designated transitional housing, she said, that there is now “a stark overutilization” of a state program called Supported Independent Living Placements, or SILPs.

Intended to be a transitional step for youth at the end of their time in extended foster care, SILP offers young people who have demonstrated an ability to live independently a monthly check (currently $923) they can use to rent a house or apartment they find themselves. But because rental vacancy rates in LA are hovering at just under 3 percent, and LA is the sixth most unaffordable rental market in the nation, options are few and far between. Gina Maida got evicted while on the SILP program (at 20, she’s still on it), was homeless for two months and now lives with her biological father in the Antelope Valley. She has to commute two hours each way to Los Angeles Trade Technical College. Her landlady evicted her for failure to pay rent. Maida says the landlady is lying and is suing her. / by Hannah Wing

“So more and more youth are being forced to take that $923, and try and find a room or apartment that they can rent on the market,” Kashyap said. “Instead of it being an option limited for our most independent youth, it’s actually about 37 percent in extended foster care are in SILPs. They’re forced to compete with the low-income tenant world for the limited housing that is available.”

A spokesperson for the Department of Children and Family Services concurred that the situation in LA creates additional challenges to securing housing for young people aging out of the system. “The housing crisis and shortage of foster homes has had a big impact on us,” the spokesperson said. “While we provide financial assistance and medical benefits for foster parents caring for children and nonminor dependents, the lack of affordable housing can negatively impact the recruitment of foster, adoptive and kinship families. For youth, it’s more difficult to find living arrangements in a SILP due to the cost of housing.”

The housing crisis puts pressure on all of DCFS’ housing programs in addition to the SILP program, the spokesperson added, “and youth who aren’t necessarily SILP-ready may be looking for a SILP as their only placement option.”

When foster youth age out of extended care at 21, their social worker is required to submit an exit plan, which includes specific plans for housing. Those who had been receiving SILP checks no longer receive them once they’ve aged out.

“We recognize that it is a housing dilemma out there in the big world of Los Angeles County,” said Michael Scoggins, director of housing for DCFS’ Youth Development Services. So a concrete exit plan ensures that “the social worker is working with them hand in hand to find permanent housing for them,” which can include connecting to providers contracted with DCFS to house transition-age youth.

A DCFS spokesperson explained the exit plan process. “Three months prior to their 18th and 21st birthday, we conduct a 90-day transition conference before the youth leaves foster care,” the spokesperson said. “We sit down with the youth and review their educational and employment plans and if they have any support services in place like counseling. Most importantly, we want to make sure they have a caring adult or supports in their lives — whether family or friend or former caregiver — as this is an important indicator that they will be able to take care of themselves.”

Some kids fall through the cracks, though. Doniesha Thomas said that she turned 21 with no plan in place, and no discussion of housing, education or employment with her social worker at the time. She didn’t learn about the SILP program when she was in extended foster care, she said, but from a friend when she was 20, so she was able to get the monthly check for only the remaining months until her 21st birthday.

Thomas said that it was only when she spoke to her biological mother, who was also homeless at the time, that she learned the county had resources for shelter she might be able to access. And it was only when she Googled “transitional housing” that she learned that as a transition-age youth formerly in county care she was eligible for discounted rents in certain housing facilities up to the age of 24 (some go to age 25). She emailed a DCFS employee whose contact information she found online. They quickly connected her to several programs she was eligible for.

Within three days, Thomas was off the street, living in a transitional housing facility in Echo Park called the Dream Center.

“It was like the greatest thing that had happened to me in forever,” Thomas recalled.

Doniesha’s experience of aging out with no plans for housing is “unfortunately not infrequent at all,” Kashyap said. She chalked this up to the varied experience levels of a young person’s team of social workers and other providers. “If you have a social worker who is thinking ahead, who is very familiar with the process of transition planning, then you’ll see young people leave with a good transition plan. But a lot of people leave without a good plan in place.”

DCFS spokesperson Neil Zanville acknowledged that an exit plan is crucial, and suggested that the variation in quality of plans is on the young person, a sentiment echoed by two other DCFS employees. “The [social worker] cannot do these tasks for the youth,” he said. “The youth must take responsibility to actively participate” in the extended foster care program, including the creation of a plan for transitioning out of the system.

How can more former foster youth access the kind of transitional housing that Thomas found in a city where any affordable housing is scarce?

One possibility is that the money raised to combat homelessness from Measure H, a sales tax hike passed by LA County voters in March 2017, will make a difference, though perhaps not immediately.

“Measure H brought additional revenue,” Espinoza said. “Now all the providers are trying to figure out how to implement it, so it’s a great direction we’re going in. But like anything else it takes time to be able to ramp up services.”

On April 16, Mayor Eric Garcetti said in his 2018 State of the City speech that “homelessness isn’t an issue. Homelessness is the issue.” Garcetti, who has been the subject of criticism for the extent to which the crisis has spiraled under his administration, has recently called for more emergency shelters in the city and touted a plan to end homelessness in LA by 2028.

As the Measure H money is implemented and Garcetti strives to fulfill his optimistic vision, there are three things Espinoza said foster youth need in order to avoid homelessness. Housing is just one of them.

The other two, she said, are more mental health services to help them process trauma and “permanent supports” in the form of relationships with supportive adults.

“They need to know they matter to someone, that someone is looking out for them,” Espinoza said. “It doesn’t necessarily mean that they can live with them, but that someone will help them navigate this real world that can often be so scary.”

This story originally appeared in the Juvenile Justice Information Exchange as part of their Los Angeles Bureau project.