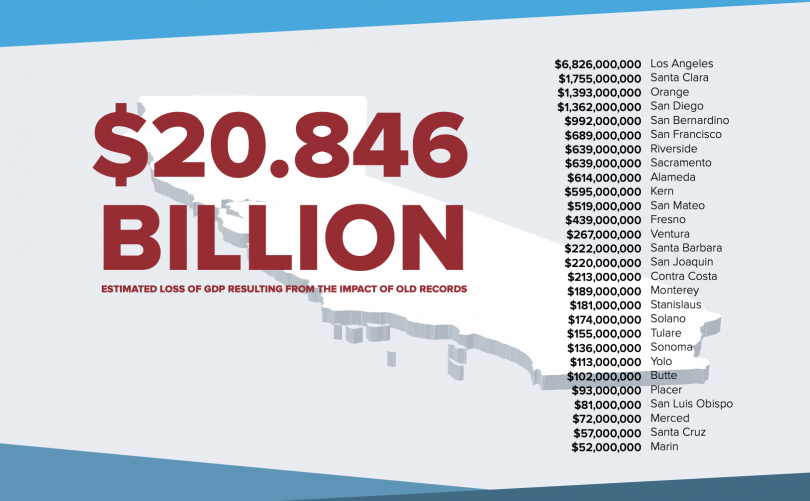 An ambitious new bill, SB 731, would automatically and retroactively seal conviction and arrest records for formerly incarcerated Californians who remain free from contact with the justice system for two years after their release. Under the bill, the state would also require arrest records be sealed for people who were arrested but not convicted of a crime.

The bill’s authors and justice reform advocacy groups say SB 731 would go a long way toward addressing some of the steepest barriers to successful reentry and would give California a “much needed” economic boost.

California loses approximately $20 billion from the state economy annually as a result of policies that disenfranchise potential workers with past conviction records, according to a new report from UNITE-LA and Californians for Safety and Justice, which are among the bill’s sponsors. Los Angeles County, alone, loses more than $6.8 billion from its Gross Domestic Product (GDP).

One in 10 Californians — 2.5 million people — between the ages of 18 and 64 were living with felony convictions in 2018. (This estimate does not include people who were incarcerated in 2018.) For two-thirds of those people, the convictions were 10 years old or more.

While employment has been proven to greatly reduce recidivism, and hiring people with criminal histories improves businesses’ retention rates, stigma often shuts the door to employment before formerly incarcerated job seekers have a chance to prove their worth.

“All businesses aim to hire the best person for each open position,” the report notes. “Yet when candidates who could make companies stronger are excluded, simply because of restrictions due to a years-old legal record, we all lose out.”

“Our conviction & arrest records system forces the people who go through it – our mothers and fathers, our brothers and sisters – to face obstacles for the rest of their lives, in every aspect of their lives,” said Senator María Elena Durazo (D-Los Angeles), who introduced the bill. “The completion of a prison sentence should pave the way for a complete return to participate fully in society. But for millions of Californians, their conviction history turns into a lifelong sentence of limited access to employment, housing, education, and the ability to live a full, normal life and provide for their families.”

Just under 75 percent of formerly incarcerated people are still unemployed one year after their release, a 2017 ACLU report on the benefits of hiring people exiting lockup found.

All that unemployment and underemployment “destabilizes families” and makes communities less safe, said Jay Jordan, vice president of the Alliance for Safety and Justice. “We must enact new policies that prioritize our collective health and safety by enabling every Californian to contribute to our state and its economy, not perpetuate the leftover harm from failed criminal justice system policies of the past that voters have repeatedly rejected.”

One formerly incarcerated woman whose story was featured in the report said having a felony record felt like having a “black cloud over your head all the time.”

“It’s so hard to further your education or get another job because of the fear associated with a past record and what it can do,” the woman, Sandy, said. “So a lot of people don’t even try.”

Sandy was working as a probation officer when she got into a drunken fight in a bar while celebrating her birthday, and was convicted of a felony and imprisoned. After being rejected for a job as a receptionist, Sandy found work as a caseworker for people leaving prisons and jails. But she hasn’t felt able to advance her career by going to graduate school and becoming a mental health practitioner because of her criminal record.

“If my record were sealed, I’d like to become a psychiatric nurse practitioner,” Sandy said. “I don’t know if I could do that now because they deal with controlled substances—I’d have to be certified by a government agency and I think my record would be an obstacle.”

Among the bill’s sponsors is Homeboy Industries, marking the first time the organization has sponsored proposed legislation. In addition to Californians for Safety and Justice and Homeboy Industries, the bill’s sponsors include the Anti-Recidivism Coalition, Legal Services for Prisoners with Children, and the Los Angeles Regional Re-entry Project.