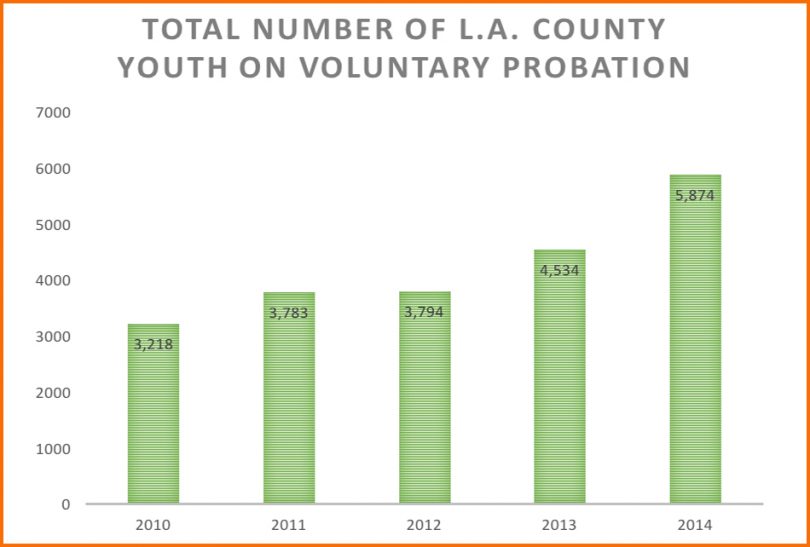 YOUTH ARRESTS DROP IN LA COUNTY, BUT NUMBER OF THOSE ON “VOLUNTARY PROBATION” HAS SHOT UP

Since the revelation last year that nearly 3,600 at-risk youth in Los Angeles County were being supervised by Probation Department staff despite having never been charged with a crime, advocates have raised serious concerns about the so-called “voluntary probation” process.

As long as a family member signs off, a Probation Department officer can work with at-risk youth at L.A. County middle and high schools with no prior history of involvement in the justice system.

At a meeting of the Los Angeles County Probation Commission on Thursday, the Probation Department provided information for the first time about the scope of the voluntary probation program. But concerns remain about the growing number of youth on voluntary probation, how the program is administered and its potential for more deeply entangling youth in the county’s juvenile justice system.

Amid declining number of youth arrests and juveniles on probation in L.A. County, advocates worry that the department’s investment in the voluntary probation program could lead to formal probation or even time at one of the county’s juvenile camps and halls.

“It scares me that we have fewer arrests and more probation involvement,” said Probation Commissioner Dan Seaver. “That’s the terrifying thing. We always want to make sure people are not going to find themselves into problems with the law because there’s nothing else to do.”

The number of youth on voluntary probation — also called “236 youth” for the Welfare and Institutions Code (WIC) that allows Probation officers to work with at-risk youth in the name of preventing juvenile delinquency — has risen sharply in the recent years. According to Probation Department statistics, 5,874 youth in L.A. County received voluntary probation in 2014, a number that increased by 83 percent from 2010.

At the meeting, Probation Department officials provided information about how they work with this population alongside data related to how long 236 youth participate in the program, and the percentage that goes on to formal involvement with the system.

A one-day snapshot of these youngsters provided by probation found 3,518 youth on voluntary probation on February 28. Deputy Probation Officers stationed mostly at schools work with these at-risk youth who are often referred for school-related issues like attendance issues, poor grades or behavior. The average length of time for officers to provide services to 236 youth is six months to a year, depending on the needs of the child and family.

Only 14 percent of youth who received voluntary probation services from Probation officers in the 2015-2016 fiscal year were later arrested and placed on formal probation.

According to senior Probation Department staff at the meeting — including Probation Chief Teri McDonald, Chief Deputy Probation Officer Sheila Mitchell, Bureau Chief Sharon Harada and Director Jennifer Kaufman — voluntary probation services have long been a way for the department to address the needs of youth who have been referred by school officials and parents. In a small number of cases, staff at parks and housing developments that receive delinquency-prevention funds from the Probation Department also refer youth.

Voluntary probation services are provided to youth at 103 high schools, 38 middle schools, five housing sites and three parks in the county. Providing Probation Department services to these at-risk youth in schools is part of an attempt to prevent school disruption, said Harada, the probation bureau chief who administers juvenile delinquency prevention funding for the department.

“We would rather have the youth stay in a comprehensive school setting and have the opportunity, if there are certain things that are needed there, to support the youth and family there, than to have them and the parents go through the process of suspension or expulsion and then they have go to another school,” Harada said. “A lot of the times [youth] come to us because they are on that cusp of being suspended or expelled.”

As the number of youth on voluntary probation has increased in recent years, Probation Department Senior Director Kaufman said that an increasing number of referrals to voluntary probation services have come because of a recent decision by Los Angeles Unified School District (LAUSD) schools to scrap suspensions for willful defiance and to emphasize restorative justice practices instead.

“A lot of our schools are LAUSD and [through] their restorative practices, they divert a lot back to the school administration and they refer to probation rather than have the school police make the arrest for, say, fighting or their first possession of marijuana under an ounce,” Kaufman said.

Even with more information from the department on the use of voluntary probation, questions remain about future of the practice.

“I think the question most of the probation commissioners might have is whether or not it’s appropriate for the department to be doing this type of work,” said Commissioner Cyn Yamashiro.

Chief Deputy Probation Officer Sheila Mitchell said that the department should not immediately celebrate the fact that 86 percent of the 236 youth avoided greater involvement with the justice system. She is hoping that a forthcoming evaluation of the voluntary probation program and other L.A. County delinquency prevention programs will offer more insight and help determine whether the probation is the appropriate entity to offer school-based programs.

“All of the research says that when we touch children that are not in juvenile justice system, the propensity for them entering is increased,” Mitchell said. “What we don’t know is whether or not that had we not touched these children at all, whether any of them would have come into the justice system.

“Those are the things that we really want to delve deeper into to find out how effective we are at keeping kids out of the justice system and is there a more effective, efficient way to do this.”

Jeremy Loudenback is the Child Trauma Editor for The Chronicle of Social Change, where this story originally appeared.