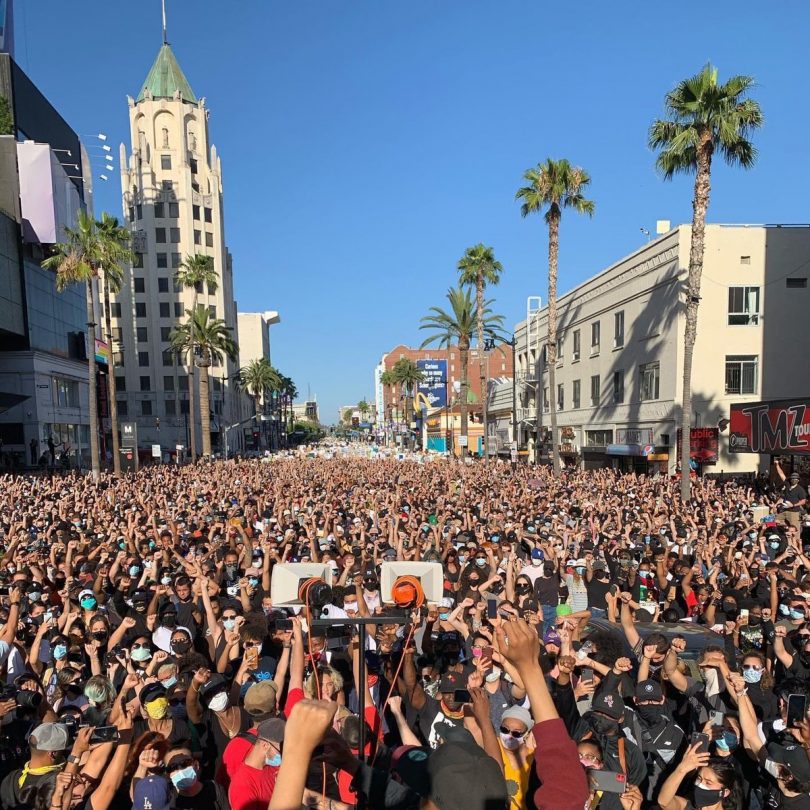 There were at least five protests, Wednesday, June 10, in Los Angeles, in support of the Black Lives Matter movement.  The downtown LA march was the largest one, drawing thousands.  And there are demonstrations already scheduled at least through the end of the coming weekend, likely longer.

This past Sunday, the enormous crowd that flowed down Hollywood Blvd. (pictured above) was perhaps the largest gathering in LA since the demonstrations began in towns and cities across the nation, to protest the killing of George Floyd by members of the Minneapolis Police Department.

In Los Angeles — as is happening elsewhere in the U.S. — the marches have begun to have a measurable effect on local and state policy. 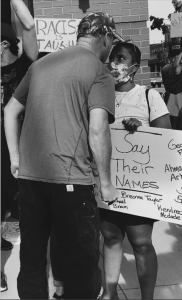 Samantha Francine stands up to a counter-protester last weekend at a demonstration in Whitefish, MT/via Facebook

The influence of the marches on the city government of Los Angeles became particularly visible just slightly over a week ago, on Wednesday, June 3.

This particular sequence of events actually began the day before, on Tuesday, June 2, when around 100 calls flooded into the virtual Los Angeles Police Commission meeting.

Most of the callers expressed their fury at LAPD Chief Michel Moore and asked for his resignation — in part because of a staggeringly unwise comment equating looters to the Minneapolis police officer who kept his knee George Floyd’s neck for eight minutes and 38 seconds, as Floyd called out desperately for help and then. just before he died, called for his dead mother.

And then there was the matter of photo after photo of officers under his command whacking peaceful protesters, or shooting them and the journalists covering the protests with so-called rubber bullets.

Nearly all the callers pushed hard for slashes in the Los Angeles Police Department’s $1,857,330,549, budget, which comprises a staggering 53.9 percent of the city’s entire budget, and included a raise for officers when most city workers were taking a cut.

Unlike some commission meetings of the past, the callers generally were not unruly.  They were enraged and said so, but they were also very focused.

One male speaker summarized the general mood of the callers when, after efficiently berating Chief Moore and the commission for around 20 seconds, he noticed he still had time left out of his allotted 30 seconds.

“I yield my time,” said the caller calmly. Then after a millisecond’s pause. “Fuck you!”

After the commission meeting, Mayor Eric Garcetti seemed unrattled by the repeated requests to “defund the LAPD,” and declared that it was not the time to cut funding for the police.

Later Tuesday afternoon, however, hundreds of protesters assembled loudly but peacefully in front of the mayor’s house.  The lively event, featuring multiple speakers, was live-cast on the ACLU of Southern California’s Instagram site. 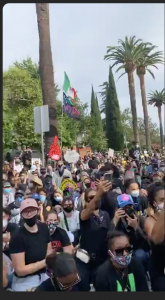 Then the next day, Wednesday, June 3, at around 1:30 p.m., representatives of a large alliance of community organizations and their allies sent a letter of crisply articulated community demands to Garcetti and members of the Los Angeles City Council.

The five-page letter had a long list of signatories, which together comprised a sort of who’s who of LA’s Black, Latinx, and Native American community organizations, along with civil rights groups, plus a list of local labor unions.

Those who co-signed the letter — who are now referred to as the “solidarity group” or alternately, “the alliance” or “the coalition” — have continued to meet, and are expected to have a new round of demands early next week, or sooner.

WitnessLA has spoken at length about these next steps with two of the alliance’s leaders, Alberto Retana, president, and CEO of Community Coalition, and Charisse Bremond, the president and CEO of the Brotherhood Crusade, and the first woman to hold that position.

But before we get to what will come next, let’s first go back to the events of last Wednesday. 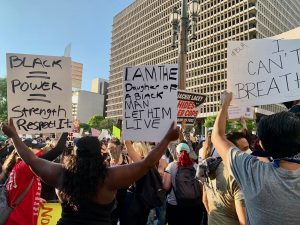 In the afternoon of the day that the letter arrived, an estimated 10,000  protesters made their way to the Clara Shortridge Foltz Criminal Justice Center, LA’s main criminal courthouse, located at 210 Temple St., where they chanted for the ousting of District Attorney Jackie Lacey.

Then the crowd moved on to Grand Park and toward the LA’s iconic City Hall building, where they settled in for the duration until mostly disbanding before the 9 p.m. curfew.

At 4:30 p.m. on Wednesday — three hours after the letter’s delivery — representatives of the alliance met virtually with the mayor and other city officials to talk about the letter’s demands.

Two of the leaders of the alliance later told WitnessLA that it was the growing presence of the marchers outside city hall that made certain that the letter’s demands were taken seriously. 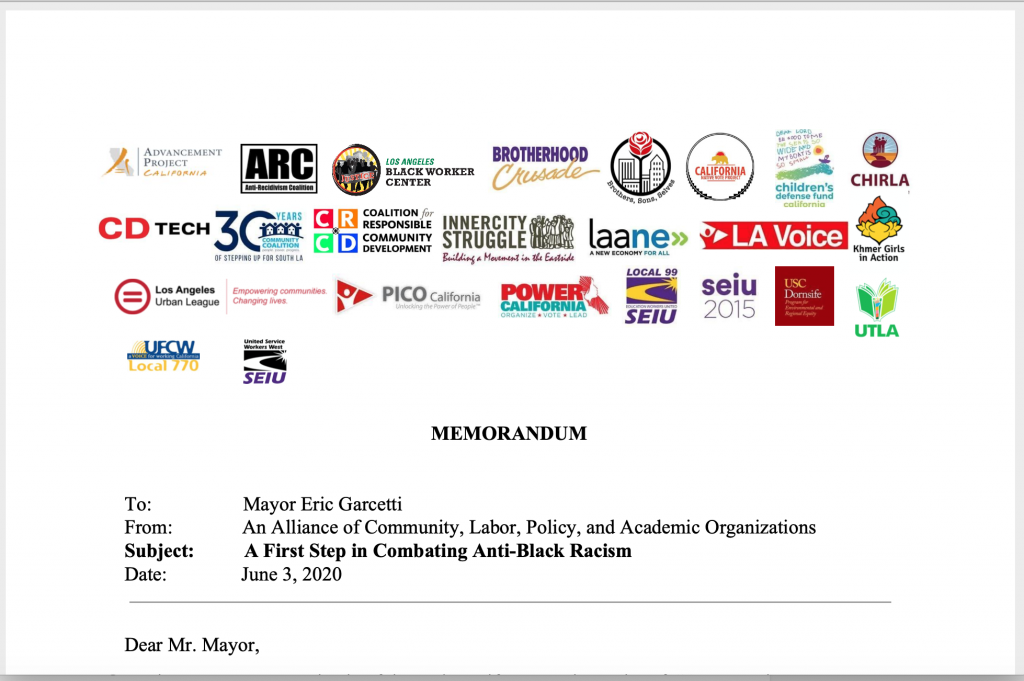 Generally, the alliance’s June 3 list of Must Do’s was as follows:

(There’s much more to the list, of course, and you can read the letter for yourself here:  Memo to Mayor Garcetti)

According to alliance leaders, the virtual meeting with the mayor lasted for about an hour. Then, when the hour was up, Garcetti said he would discuss the coalition’s demands with his staff and others, then make some announcements in about 24 hours.

As it turned out, Garcetti’s decision making did not take 24 hours.

Instead, just after 6 p.m. — which was around 30 minutes after the ending of the meeting with the alliance leaders, Garcetti surprised everyone with an unexpected, live-streamed press conference. 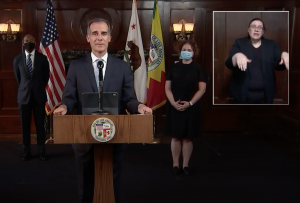 “It’s time to take action,” the mayor said as local news networks scrambled to drop everything else and cover the speech. Then Garcetti made the statement that quickly became national news.

“We will not be increasing our police budget,” he said. Instead, Garcetti committed to $250 million in cuts to the city budget that would instead be invested in needed community programs, in particular, in black communities.

LA Police Commission President Eileen Decker made the second part of the news-breaking announcement, which was that the city intended to cut around $150 million from the LAPD’s budget.

The mayor, the police commission, and the city council would be making other changes that community activists had been demanding, Garcetti and Decker said.

There would, for instance, be a moratorium on putting LA residents’ names in CalGang, the state’s problematic gang database, said Decker. 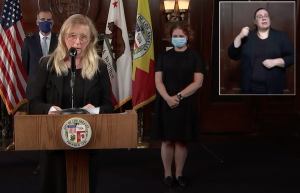 The mayor and the police commission also intended to institute such policies as requiring police officers to report misconduct, according to Decker and Garcetti.

“We have to make sure there is no culture of silence,” said the mayor, who also announced an Office of Racial Equity that he promised would be up and running by July 1.

The mayor also committed to an expansion of a youth diversion program. (WLA will have more on that at a later time.)

Finally, Garcetti and Decker announced they intended to work to create an independent prosecutor outside the DA’s office.

“We hear you!” Garcetti said.

Although the mayor, the police commission, and the city council made some opening concessions last Wednesday, according to the Community Coalition’s Alberto Retana, and the Brotherhood Crusade’s Charisse Bremond,  the alliance and its allies do not intend to leave the field of battle until the rest of their demands are met. 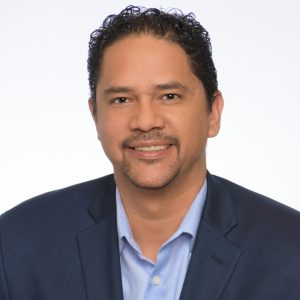 Among the things that the coalition will be demanding — or in some cases, re-demanding — in the next round, said Bremond and Retana, is for the mayor to go beyond the $150 million he has said he’ll shave from the LAPD’s budget.

“We asked for $250 million to be cut from the police budget,” Bremond told us, “mainly because we don’t want that additional $100 million that we need” — and that the mayor has promised — “to be cut from other city departments when the LAPD has 54 percent of the budget for this city.”

According to both Bremond and Retana, A realignment of the city’s budget, in general, is critical, even beyond the practical need for changes.

“It is reflective of the moral investment of the city,” said Retana.

Another police-related concern, said Bremond and Retana, is the fact that the communities that are being most policed by the LAPD, know very little about the specifics of where the department’s $1.8 billion-plus budget is going.

“For example, we want to know how much is going to the Metro division,” said Retana, who then pointed to the LA Times investigation of last year, which found that when the LAPD’s elite Metro division made “pretext stops” in South LA, black drivers made up 68 percent of such stops in South LA where they are 35 percent of the population.

(Pretext stops are often described as the vehicular version of stop-and-frisk, where a broken tail light or some other small possible violation becomes an excuse to question a driver, and/or search a vehicle.)

“We also want to know how much is spent on militarized equipment,” added Bremond.

In other words, coalition members want to see the line items that are presently taking up 53.9 percent of LA’s COVID-battered budget.

Among the alliance’s most important community development demands is $100 million for ten “healing centers” to be located in the city’s communities where trauma, violence, and the effects of institutional racism has become a serious public health issue. 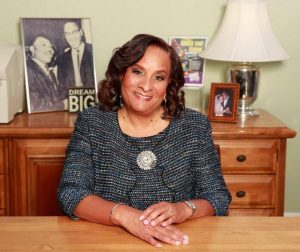 “We work with 3000 youth a year,” said Charisse Bremond, “I hear their stories every day. And I cannot overstate the amount of trauma we hear about.”

Bremond describes a recent conversation with about 10 youth that was held at a community barbershop. There each kid described one traumatic event after another.

In the beginning, the kids talked in response to questions by the adults.

“Then they forgot we were there. They were just talking.”

LA’s trauma-battered communities need a system of healing environments, she said, “that are safe places for young people and families to discuss the truth. Once it’s unpacked, then they can begin to heal.”

Many youth are feeling “anger and frustration right now.” she said. “But their trauma is also a story. It’s also narrative.”

To tell that story, according to Bremond, community members “have to have somewhere they can go in the community, with leaders that look like us, who can understand the trauma. Because all of us have been through that kind of trauma.”

As an example of what the alliance members envision, Bremond and Retana point to the Chicago Torture and Justice Center, and The Reverence Project, founded by LA’s Aqeela Sherrills, after his 18-year-old son Terrell, who was at the time home from studying theater arts in college, was shot and killed on January 10, 2004.

In general, the alliance wants the mayor to be “bold,” Retana said, and to “make investments in what black leadership wants.”

What he’s putting on the table is not enough,” Bremond agreed.  “And we have to keep up the pressure.”

The bottom line, said Retana, while the mayor has made small but important steps, the city’s concessions so far are “a crack in the wall.”

Taylor Walker covers some of the newest changes along with proposed changes in LA County and the state here.

There have been other recent changes made by the LA County Board of Supervisors, in response to the Black Lives Matter movement and the protesters.

More on those issues soon.

Photo of Sunday’s Hollywood Blvd. march at top of page by Joseph Williams of Black Lives Matter.  Thank you, Joseph!

And thank you to @Yakooza for the use of the drone-taken video of the same Hollywood march held on Sunday, June 7, 2020!