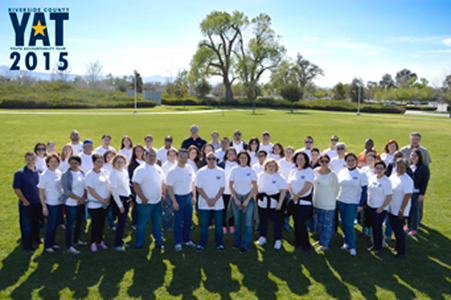 The ACLU has filed a class action lawsuit challenging Riverside County’s “informal” probation program for kids who commit low-level offenses and kids deemed “at risk” of future offenses. The county’s “Youth Accountability Team” (YAT) is “astonishingly punitive and ineffective,” according to the complaint, and ensnares approximately 400 kids each year, locking them into a six-month probation term for being “defiant,” for being tardy, for swearing, for giving into peer pressure, and for exhibiting other behaviors common among children.

The ACLU filed the lawsuit on behalf of Riverside students who were placed in the technically voluntary probation program for school misconduct. The ACLU was joined by the National Center for Youth Law and the law firm Sheppard, Mullin, Richter & Hampton.

Riverside County characterizes YAT as a beneficial diversion program for kids who have committed low-level offenses or who may appear to be headed toward involvement with the juvenile justice system.

The ACLU, however, says the program, which launched in 2001, treats kids—especially kids of color—like criminals, funneling them into the school-to-prison pipeline.

One black child was even placed on YAT probation for what was characterized as “pulling the race card,” according to the complaint.

The program runs as a partnership between Riverside’s Probation Department, the Riverside Police Department, District Attorney’s Office, the Riverside Unified School District, and the Wiley Center for Speech and Language Development. These agencies make up the “team” in “Youth Accountability Team.”

Parents, school administrators, and law enforcement officers can refer children to the program. YAT administrators have received referrals for kids as young as first graders.

In addition to kids who have been caught committing minor crimes, kids who “are at risk for delinquent behavior” can be referred.

The “at risk” kids can be as young as 12, and must be exhibiting two of the following criteria:

Kids found to be YAT-eligible get placed on a contract that, according to the probation department’s website, “may include: intensive probation supervision; school and home visits; drug testing; referrals to community resources; community service; jail tour; and educational programming or activities.”

The terms of supervision include adhering to curfews and agreeing to searches of their person and home—searches that the ACLU says violate children’s Fourth Amendment rights.

According to the lawsuit, former Senior Probation Officer Debbie Waddell said the program was used to get kids “into the system by fingerprinting and photographing them.” Through YAT, “we can search their homes any time we want and work to obtain evidence against them so that when we can get ’em, we can really get ’em,” Waddell added.

Former Riverside County Deputy District Attorney Anthony Villalobos made a similar statement about using the program to get around due process. “We can do all kinds of surveillance, including wire taps on phones, without having to get permission from a judge,” the deputy DA said.

And the county agencies get to keep all the information they gather on the kids in their databases, even after the terms of YAT are completed.

Kids on YAT probation do not benefit from access to legal counsel, an impartial person in charge of decision-making, or enough notice regarding charges, either, according to the lawsuit. Additionally, the YAT program metes out consequences to kids “that are often more severe than those that would be imposed by a court.”

Moreover, the lawsuit calls the county’s process of getting kids and families to agree to the probation program “coercive.”

Riverside fails to “provide children and families with any formal notice of what children are charged with or the underlying allegations, their legal rights, or the juvenile court process,” says the complaint. “Instead, referral to YAT is communicated through a brief, informal, and inadequate conversation by phone or in person at school, in which Defendants sometimes blatantly misrepresent the nature of the YAT program and the consequences of not acquiescing to YAT probation.”

Kids are allegedly not informed of their rights. According to the ACLU, the youths are not told that they have the right to remain silent and the right to speak with an attorney. The prospective YAT probationers “are led to believe that if they do not agree to enter the YAT program, they may be referred to the District Attorney’s office, even when they are not accused of a criminal offense.”

To make matters worse, kids who participate in YAT—even the kids who have not committed criminal offenses—become ineligible for any future diversion programs.

The ACLU suggests that Riverside should employ a diversion program that keeps kids from falling further into justice system-involvement, instead of YAT. “A substantial body of research shows that increased contact with the juvenile justice system is counterproductive and harmful to child development and rehabilitation,” the complaint says. “In practice, however, the “informal” nature of YAT probation leaves children worse off. YAT probation keeps the harmful contacts with the criminal system while eschewing procedural protections.”

According to the ACLU, the YAT program is a product of the bad old days—the days in which the effects of the 1990s myth of the teenage “super-predator” were still rippling outward, to the detriment of teens who were not any more violent or dangerous than previous generations of teens.

Over the past decade, the nation’s juvenile justice systems have steadily cut back on unnecessary use of incarceration for young people. Yet, according to a recent report by the Annie E. Casey Foundation, titled “Transforming Juvenile Probation: A Vision for Getting It Right,” there has not been corresponding reform in the use of juvenile probation, which annually affects a half-million U.S. youth.

When it works well, probation offers court-involved kids the chance to remain in their communities where they can participate in constructive and therapeutic activities. But, too often—like in the case of Riverside’s YAT program, probation becomes “a gateway to unnecessary confinement.”

This is particularly true for rebellious kids who frustrate authorities with “noncompliant behavior,” but who present no real threat, according to the report. And when it comes to the most challenging kids whose behavior can be a threat to public safety, using evidence-based approaches that focus on “incentives” and “growth” rather than sanctions is especially crucial.