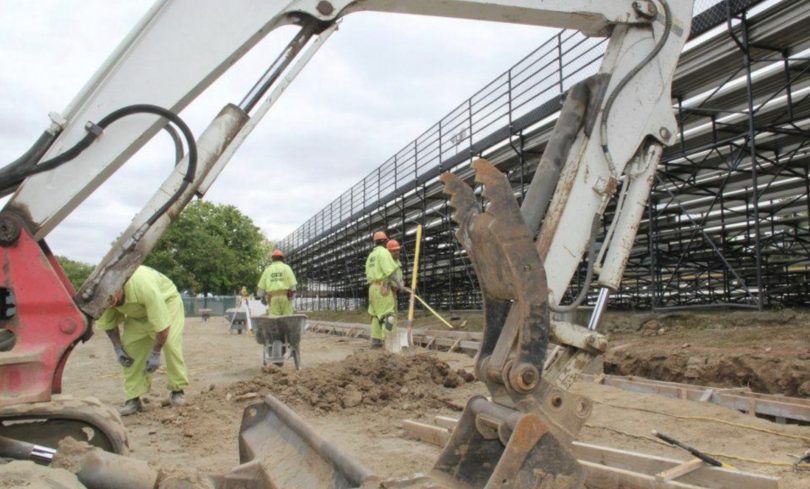 California banned slavery in 1850, two years before the Thirteenth Amendment outlawed the practice of owning other human beings. Yet as with the U.S. as a whole, the golden state allowed—and still allows—a form of involuntary servitude when it is viewed through the lens of punishment for a crime.

“After the Civil War, the former owners of enslaved people looked for ways to continue using forced labor,” wrote Shane Bauer, author of the prize winning book, American Prison: A Reporter’s Undercover Journey into the Business of Punishment. “With Southern economies devastated by the war, businessmen convinced states to lease them their prisoners,” he wrote. “Convicts dug levies, laid railroad tracks, picked cotton, and mined coal for private companies and planters. The system, known as convict leasing, was profitable not only for the lessees, but for the states themselves, which typically demanded a cut of the profits. Tennessee once made 10 percent of its state budget from convict leasing.”

In June of this year, the ACLU looked at the present day incarnation of this practice in their report, Captive Labor: Exploitation of Incarcerated Workers, which explores the use of prison labor nationwide.

Meanwhile in California, the state’s lawmakers considered but ultimately rejected a bill, ACA 3, which would have made CA the fifth state to put the issue before voters this November.

The California Abolition Act would have given CA residents the opportunity to decide whether the state constitution should be amended to prohibit “involuntary servitude and forced labor compelled by the use or threat of physical or legal coercion.”

“Abolition is not conditional. In the year 2021, in our great state of
California— often touted as one of the most progressive states in the country— this is unacceptable,” said ACA 3’s author Assemblymember Sydney Kamlager (D-Los Angeles) when she introduced the bill, noting that the proposed amendment sought to “prohibit slavery and involuntary servitude without exception.”

Yet, despite impassioned support in many quarters, ACA 3 failed to clear California’s Senate. Twenty senators voted in favor, six voted against, and fourteen abstained.

The story below by Stateline’s Marsha Mercer looks at this same issue, which will be considered by the population of five states.

More than 150 years after it was officially outlawed in the United States, slavery will be on the ballot in five states in November, as a new abolitionist movement seeks to reshape prison labor.

Voters in Alabama, Louisiana, Oregon, Tennessee and Vermont will decide on state constitutional amendments prohibiting slavery and involuntary servitude, in some cases except for work by incarcerated people. Advocates say the amendments are needed to strip antiquated language from state constitutions and to potentially transform the criminal justice system by making all work in prisons voluntary.

“This is the crown jewel of criminal justice reform,” said Curtis Ray Davis II, who served 25 years for second-degree murder in the Louisiana State Penitentiary known as Angola and is campaigning for the amendment in Louisiana following his experiences in incarceration.

“Most people believed it was impossible to get the amendment on the ballot in Louisiana, but Louisiana and America should not be in the business of legalized slavery,” he said in an interview.

The 13th Amendment to the U.S. Constitution, ratified in 1865, abolished slavery and involuntary servitude in the United States — except as punishment for someone convicted of a crime. The “exception clause” loophole led to repressive 19th-century laws in the South known as Black Codes that allowed authorities to incarcerate Black people for petty crimes, such as vagrancy, and then force them to work. Black Codes were a precursor to the Jim Crow laws outlawed by the Civil Rights Act of 1964.

“We want to remove offensive language and provide protection for citizens from slavery and involuntary servitude,” Max Parthas, co-director of state operations of the Abolish Slavery National Network and co-host of a weekly online radio program, Abolition Today, said in an interview.

Parthas and other proponents also want to remove the exception clause from the 13th Amendment. They hope the stalled effort in Congress will gain momentum once states amend their constitutions.

There’s a debate over whether removing the exception clauses in the U.S. Constitution and state constitutions would be largely symbolic, or whether it could lead to significant change in the prison system. Advocates say the symbolism is important, given the shameful historic context, but also that banning involuntary servitude could be a steppingstone to improving the pay and working conditions of incarcerated people.

So far, no state that has passed the amendment has changed its prison work rules, but lawsuits to force changes are likely.

“The [state constitutional] amendment is more than symbolic,” said the Rev. Mark Hughes of Burlington, Vermont, executive director of Abolish Slavery Vermont and Justice for All Vermont, organizations that seek to end systemic racism in the state. “Vermont has permitted slavery longer than any other state — for 245 years. What that means is no constitution allowed slavery in any state before Vermont,” he said.

In 2018, Colorado became the first state since Rhode Island in 1842 to ban slavery and involuntary servitude outright. Two years after a ballot initiative with confusing language failed, Coloradans voted 66% to 34% for an amendment reading: “There shall never be in this state either slavery or involuntary servitude.”

Ballot initiatives also have passed with wide margins elsewhere. In 2020, Amendment 1 passed in Nebraska by 68% to 32%, and Amendment C passed in Utah 80% to 20%. Since 2020, bills have been introduced to put slavery or involuntary servitude on the ballot in states including California, Florida, Ohio, New Jersey and Texas.

But after the amendment passed in Colorado, a lawsuit seeking higher wages for prison workers was dismissed. Another lawsuit, seeking to end compulsory prison work, is in state court. Inmates Richard Lilgerose and Harold Mortis in February sued Colorado Democratic Gov. Jared Polis, the executive director of the Colorado Department of Corrections and the agency itself, arguing that the state has continued to compel people in prison to work under conditions amounting to involuntary servitude.

Under current rules, able-bodied inmates in Colorado are expected to work in the kitchen, the laundry, as janitors or other jobs.

The state does not comment on pending litigation, but in court papers, it said the lawsuit should be dismissed because Colorado does not force those who are incarcerated to work, but rather penalizes them for not doing so. Incarcerated people who refuse to work might forfeit time they have earned off their sentences, be forced to spend up to 21 hours a day in their cell, or face reductions in phone calls, visitors and time for meals.

If the incarcerated plaintiffs prevail in their class action suit, their attorneys say, Colorado might have to revamp that system.

“The state would have to create incentives for people to work — like wages,” David Seligman, executive director of Towards Justice, a nonprofit law firm in Denver that advocates and litigates on economic justice issues, said in an interview. “That’s how it is supposed to work in this country. Work has to be voluntary.”

To head off lawsuits, some states have added compromise language that suggests prison work is still authorized. In Utah, Amendment C states that “Neither slavery nor involuntary servitude shall exist” in the state but adds that the provision “does not apply to the otherwise lawful administration of the criminal justice system.”

In Tennessee, state Sen. Raumesh Akbari, a Democrat, introduced Amendment 3 in 2019 as part of the national campaign to remove the exception clause from state constitutions.

“Someone from the organization brought it to me, and I thought it was a great idea,” she said in an interview. She later added a second sentence, so that the proposed amendment now reads: “Slavery and involuntary servitude are forever prohibited. Nothing in this section shall prohibit an inmate from working when the inmate has been duly convicted of a crime.”

“The Department of Corrections asked us to put in the exception. I don’t think it would have moved forward if we had not agreed to do it,” she said. “There’s a difference between working and being enslaved. This will allow people in prison to work if they want to.”

Kathy Chambers, who heads the Yes on 3 campaign to pass the amendment in Tennessee, said the amendment’s bipartisan support is a result of the wording of the amendment.

“This could easily be a partisan issue, but it’s not,” she said in an interview. Former U.S. Sen. Bob Corker, a Tennessee Republican, is on the campaign’s advisory board. “The strategy here is bipartisan all the way.”

The ballot question in Louisiana reads: “Do you support an amendment to prohibit the use of involuntary servitude except as it applies to the otherwise lawful administration of criminal justice?”

What practical effect the amendment would have in Louisiana is a matter of dispute.

“If this amendment passes, then the incentive to incarcerate Black people will no longer exist,” said former inmate Davis, who never made more than 20 cents an hour working while incarcerated. After he was released in 2016, he published a book of essays, “Slave State: Evidence of Apartheid in America,” which has been made into a documentary, and founded Decarcerate Louisiana, a criminal justice reform organization based in Baton Rouge.

He lobbied state legislators last spring, arguing the constitutional change is a moral and religious issue, and plans to visit all 64 parishes in the state before Nov. 8 to encourage voters to turn out.

But Louisiana state Rep. Alan Seabaugh, a Republican who opposed the measure in committee, said the effect would be “absolutely none, whatsoever. It’s essentially just symbolic. It says what’s already on the books — although potentially worse.”

In other words, “the new amendment technically allows slavery,” Seabaugh said. “I don’t think anybody thought of it that way, but that’s what it says.”

Asked to predict the practical effects of amendments on state ballots this year, some proponents prefer not to speculate.

“We don’t want this bill confused with a labor bill,” Parthas of the Abolish Slavery National Network said. “This is strictly about ending slavery. What comes after that is to be seen.”

And Hughes, in Vermont, said, “Who knows?” what the effects will be. “I just want to abolish slavery.”

This story was originally published in Stateline, an initiative of The Pew Charitable Trusts.