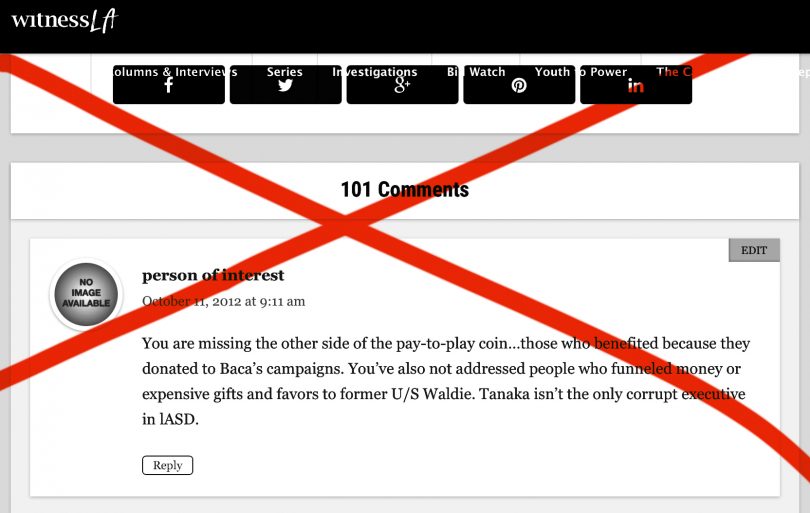 From its birth on March 12, 2007, until now, WitnessLA has featured a comment section that helped us to hear the voices of our readers, and allowed us to, when needed, interact with them directly.

Over the years, WLA’s comments section has always been lively.  It has also gone through different stages.

Perhaps its most dramatic period was during the interval between late 2011 through much of 2016.  This was when WitnessLA was investigating issues of corruption and brutality pertaining to the reign of Paul Tanaka, the once-powerful former undersheriff of the Los Angeles Sheriff’s Department, and that of former sheriff Lee Baca.

During those months and years, the comment section featured a lot of people from law enforcement, present and retired. In particular, there was a long list of commenters from the LASD who cared deeply about the department and their work, were disturbed by what was going on, and wanted to talk about it. WitnessLA became a forum for that conversation.

During that period, the commenters didn’t represent the majority of our readers, but their impassioned and knowledgable discussions offered a lot to the rest of WLA’s reader community — including other journalists, other members of law enforcement (even the occasional FBI agent), elected officials and their staffs, justice advocates, attorneys of all stripes, a judge or two, and more.

Fast forward to the most recent stage of WLA’s comment section. Those posting still include people from law enforcement,  working and retired, along with a cluster of other regular commenters, plus those who are occasionally drawn to say something because of a particular story.

But, over the last year or so, the mood of the comment section has gradually changed.

It has grown toxic, to the degree that, with a few notable exceptions, it offers little to the vast majority of our readers or, we suspect, to most of the commenters themselves.

Certainly, we’ve had more than a few trolls, toxic comments, and genuine threats throughout the years. Yet, of late, the balance has tipped too far.

We believe strongly in the value of reader conversation about the events of the day, the world of justice and injustice — and what you think about the work we’re doing, pro and con. In short, we want a forum for dialogue.

And we are deeply grateful to each of you who have added your voice to the remarkable array of voices that have created a complex but dynamic dialogue over the last 14 years.

But what is going on now is, too often, not healthy for anyone.

So for the time being, we’re shutting down WitnessLA’s comments section, while we contemplate what to do next.

Maybe we all just need a break. Or maybe we need something new altogether.  Right now, this is an open question.