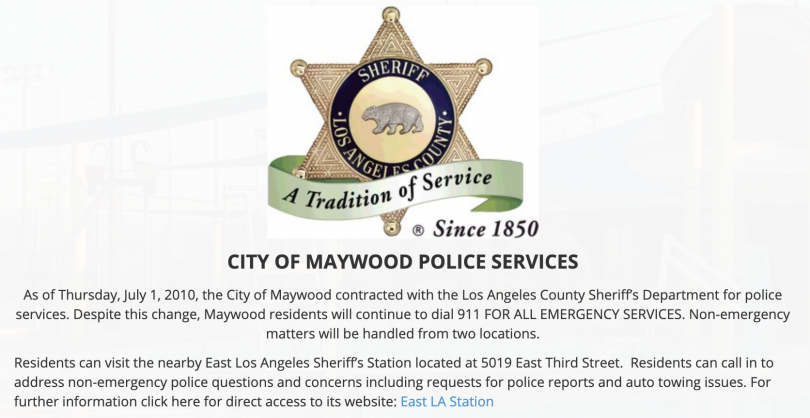 One woman alleged a policeman in Maywood, California, pulled her over, threatened her with his gun and raped her.

Then there was the class action accusing the town’s police force of unconstitutional traffic stops.

In another case, a man claimed he was handcuffed when an officer punched him, breaking his nose. His racketeering suit called the Maywood Police “a renegade, largely out-of-control ‘gang’ that routinely tramples the rights of those unfortunates who come under its oppressive thumb.”

In 2008, the police department for the one-square-mile city just outside Los Angeles was facing 14 civil misconduct lawsuits. A year later, an investigation by California’s attorney general found “a troubling pattern” of excessive force.

By 2010, Maywood’s litigation bill topped $12 million, and its insurance carrier, the California Joint Powers Insurance Authority, dropped it as a client. The city soon shuttered its police department and contracted out law enforcement to the Los Angeles County Sheriff’s Department.

But the Sheriff’s Department is “hardly problem-free,” said Rachel Harmon, a law professor at the University of Virginia with expertise in the legal regulation of policing. She noted that in 2015 the department was subject to a U.S. Department of Justice consent decree for its policing practices in Antelope Valley.

“Would successful reform of the Maywood Police Department have served the community better than the contract they have now? I don’t know,” she said. “It’s very hard to say.”

Maywood is not the only town to close its police department after losing liability insurance. It’s happened in municipalities in Michigan, Louisiana, Illinois, Tennessee, Pennsylvania, Ohio and elsewhere in California.

While such closures might be a last-ditch option, the increased insurance rates that several cities and towns have faced recently after paying large settlements or losing excessive force lawsuits demonstrate how the fiscal toll of police misconduct allegations can quickly escalate.

For example, Champaign, Illinois, saw its liability insurance rates go up 10% last year, after its police department faced an excessive force lawsuit and a case claiming police coerced witnesses to win a wrongful conviction against a man who was later exonerated. Madison, Wisconsin, saw its insurance rates go up 42% between 2015 and 2018, in which time it paid $13 million in three police shooting lawsuits.

“All around the country, it’s sort of the implicit backstop, it’s the unspoken threat: If things get out of hand in your city and you can’t control your losses, we might choose not to renew you next year,” said University of Chicago law professor John Rappaport, who studies how liability insurers affect the criminal justice system.

That threat is more salient than ever. Federal excessive force claims against police departments and municipalities have tripled between 2005, when 95 suits were filed, and last year, when there were 312 new complaints, according to a Law360 review of civil U.S. District Court filings.

“If this keeps up for a few more years, it’s possible then we would see more cities being dropped if insurers feel costs are getting out of control,” Rappaport said.

While sheriff’s departments may have more resources than small towns, they also can’t cater their law enforcement to local needs, leaving legal experts split on what that means for access to justice in those communities.

Before CJPIA dropped Maywood as a client, it set up a plan to help the city shape up.

CJPIA executive Norm Lefmann told Law360 the authority’s initial concern was the police costing the insurance authority “significant dollars on claims and settlements.” But after the city council fired an administrator who was receptive to reform, the CJPIA started to worry “the city was not being properly managed.”

“We let them know a condition of ongoing coverage would be for them to follow the work plan,” Lefmann said. “Even though the city council made promises to address our concerns, they did not do that. We decided to pull coverage when we saw that the exposure continued.”

A spokesman for the city did not respond to requests for comment. Today, the city still owes the CJPIA about $10 million.

Maywood may be an extreme case, but police misconduct lawsuits are on the rise, and so are associated jury awards and cash settlements.

But that doesn’t necessarily mean there’s been more bad behavior by law enforcement.

Rappaport’s research compares this rise in litigation with insurance claims against municipal police departments. Such claims are opened regardless of whether a lawsuit is filed, and because they are “closest to the bottom of the dispute-resolution pyramid,” he said, they paint a more complete picture of law enforcement practices.

And while the rate of police misconduct lawsuits has jumped in recent years, insurance claims have “gently declined,” he said.

Rappaport attributes this paradox to a change in attitudes since 2014, when two incidents of unarmed black men dying at the hands of police drummed up public outcry — first over a video of officers in New York City choking Eric Garner to death and then from the shooting of Michael Brown by an officer in Ferguson, Missouri. Brown’s family reached a $1.5 million settlement with the city of Ferguson, and New York City paid the Garners $5.9 million to end their wrongful death suit.

But the uptick in successful litigation against law enforcement means more risk for the insurers who indemnify municipalities.

If litigation costs uniformly increase, premiums could skyrocket, Rappaport said, but if costs are limited to a few communities, those departments could face a fate similar to Maywood’s.

Shutting down the Maywood Police Department solved the city’s insurance problem, but it hasn’t relieved its justice woes, according to Frank Hauptmann.

Hauptmann was hired as the Maywood police chief in 2008, and implemented some of the insurer’s requested reforms before the department was shut down.

He said Maywood residents still tell him “how poor policing has been since the Sheriff’s Department took over.”

“Response times are much longer,” he said. “With your own police force, you have a much greater ‘buy-in’ by the officers. Deputies come and go and never spend enough time in the area to create a relationship.”

According to FBI statistics, the crime rate decreased in Maywood, from 151 violent crimes in 2009, the year before law enforcement was turned over to the Sheriff’s Department, to 88 incidents in 2014, the most recent year statistics were available.

Yet, according to patrol statistics, sheriff’s deputies put in about 114,000 minutes in Maywood per month — the equivalent of 12 patrolmen working 40 hours a week. When the Maywood Police Department shut down in 2010, it had 41 officers.

The Sheriff’s Department did not respond to requests for comment.

Harmon said that when a small community contracts out with a large, county-wide sheriff’s office, it often gets the same services provided to other jurisdictions, not policing tailored to its own needs.

Maywood has about 30,000 residents, while the Los Angeles County Sheriff’s Department provides law enforcement services to more than 3 million residents, she said, meaning “it’s unlikely that Maywood is going to have a lot of influence over the kind of policing it gets.”

“Communities often have particular concerns or priorities. They often have values about the kinds of intrusions or tradeoffs they’re willing to make in policing,” she said. “If you contract with a county that you have very little influence over, you may not get the policing you want.”

But sometimes communities benefit from economies of scale, said James Brunet, a professor at North Carolina State University’s School of Public and International Affairs. He says a larger law enforcement organization can afford higher costs, from uniforms and fuel to liability insurance and pensions.

Brunet has studied small towns in North Carolina that shut down their police departments for various financial reasons, and said they were all “pretty well satisfied” with the sheriff’s services.

“If the sheriff’s office is much larger than that small municipal police department, they may have better training, they have more updated equipment that they can provide,” he said. “That’s a large burden on a small town tax base.”

Scarce resources can create staffing and recruitment issues as well, according to Michael Lambert, mayor of Sorrento, Louisiana, a town of about 1,600 a few miles from the Mississippi River.

“Small, small towns just can’t afford to pay salaries and offer the career enhancement to attract high quality people,” he said. “We just don’t have it. That’s a nationwide problem.”

When Lambert was running for mayor in 2013, Sorrento’s eight-member police department had already gained notoriety. In 2009, an officer shocked a community college student who had asked what a stun gun felt like. Another policeman was fired for driving more than 75 miles per hour 700 times in two months.

In 2013, the town’s chief was dispatched to help an intoxicated woman at a gas station. Instead of driving her home, he took her to his office and sexually assaulted her. Not only did the woman end up winning a $50,000 lawsuit against the town, the chief, Earl Theriot Jr., later pled guilty to federal charges, admitting he’d lied to the FBI about the incident.

A month into Lambert’s term, Sorrento’s insurer, Risk Management Inc., threatened to drop the town as a client.

“They made good on that promise about 60 days later,” he said.

After the town’s residents voted to disband its police department, it contracted out law enforcement with the Ascension Parish Sheriff’s Office, which has committed to have one deputy on duty in Sorrento at all times.

Those deputies engage in community-based policing, riding around with their windows down and chatting up residents, Lambert said.

Crime is down, according to Lambert, and the town hasn’t had a homicide in six years.

“I think Sorrento is a much safer town now,” he said.

In recent years, some insurers have developed “improvement plans” like the one attempted in Maywood to help troubled departments get back on their feet. Those plans can include auditing more frequently, overhauling use-of-force policies and offering more training for officers.

The CJPIA has implemented improvement plans six times, according to Lefmann, and some initiatives have been more successful than Maywood’s.

In 2011, the CJPIA issued a warning and improvement plan to the town of La Puente, California, instructing it to hire a permanent city manager, report any claims of harassment within the department, and even send City Council members to etiquette classes.

Lefmann said such measures are meant to protect the CJPIA’s members. The public insurance pool formed after private insurance companies stopped covering many small municipalities in the late 1970s. Because the members share one another’s risk, everyone suffers when one town is governed irresponsibly.

“All we can control is who we extend coverage to,” he said. “We need to make sure we have good members of the family.”

With the advent of performance improvement plans in the last decade, the insurance industry has become a sort of private regulator for public police departments, said Rappaport, who has researched the phenomenon.

But Harmon questioned whether insurers driven by their bottom line will implement “best practices” for developing reforms.

“Insurers have very particular interests,” she said. “They push to reduce costs, sometimes by the cheapest path necessary. That means even when they induce reform, often they do it by pressuring a municipality to adopt cookie-cutter policies, or out-of-the-box online training modules that might help mitigate liability concerns but won’t necessarily change officer behavior significantly or reflect community concerns and values.”

Perhaps the biggest regulator of police behavior will be public opinion, which has become more critical of police misconduct, Rappaport said.

That sentiment trickles down to the courts, he said, and could inspire towns to take action to prevent misconduct claims instead of reacting to them — heading off insurance coverage woes in the process.

“Hopefully the fact that juries across the country are turning up the heat on the police is going to put pressure on municipalities to do a better job of training the police and regulating the police,” he said.

This story by Cara Bayles first appeared on Law360.