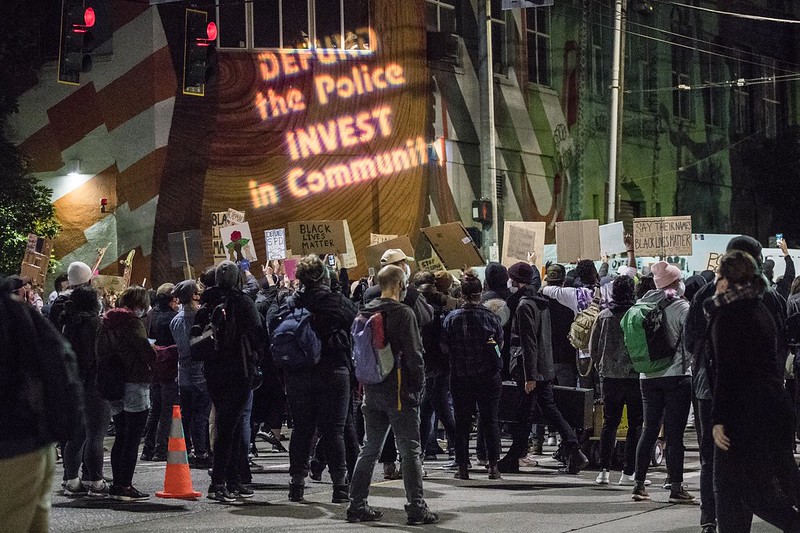 The police killing of George Floyd in Minneapolis and recent police involvement in many additional deaths, shootings, and violent incidents have reignited demands for transformational change to law enforcement practices that too often result in vast racial disparities in our justice system. Not only are Black Americans greatly overrepresented in the criminal justice system, they are three times more likely to be killed by police officers than white Americans, and nearly twice as likely to be killed by police than Latino Americans.

This moment of crisis requires transformational change. Former police chief and Justice Department official Ronald Davis recently participated in a  target="_blank" rel="noopener noreferrer">discussion, moderated by Brendan Cox, director of policing strategies for the LEAD National Support Bureau, regarding calls for “defunding the police,” what community-driven policing looks like, and how reallocation of government funds can improve community-led public safety strategies.

Davis was director of the Justice Department’s Office of Community Oriented Policing Services from 2013 to 2017, and he was executive director of President Obama’s Task Force on 21st Century Policing. He is also a founding member of Law Enforcement Leaders to Reduce Crime & Incarceration (a project of the Brennan Center), which held the online discussion.

His remarks, edited for length and clarity, are presented here in an interview format.

>Millions are taking to the streets to demand change. Can we reform our current policing strategies, or does policing as we know it need to be dismantled?

After 30 years in local law enforcement trying to reform it, I would have to frankly say no, we cannot reform our current system. Reform over the past few years has mostly been tinkering around the edges — a policy change here, a trend change there. But it didn’t go far enough. Our current system of policing not only has the impact of racial disparities, but it’s still very much impacted by structural racism.

We’re going to have to dismantle this thing all the way to the ground and rebuild it. The challenge, however, is that we have to do it while we are still flying the plane — because we do not have the ability to just stop police services and rebuild.

When I hear people say they want to abolish the police, I understand it as a call to abolish the existing system that has failed us. And when people call for police defunding, I think people are really talking about is reimagining public safety — with the idea that we invest in social services. Properly funding social services is going to not just reduce crime, but also holistically promote public safety.

I think, moving forward, we should not continue the debate about words that can be taken out of context, but we need to understand what the community is saying: Quit tinkering around the edges, quit playing with policy changes, and do the uprooting changes that are necessary to remove the structural racism. When you have structural racism and institutional deficiencies, the systems are so bad that even good cops have bad outcomes and bad cops are able to hide in the system and operate with impunity. And people focus on this “bad apple” argument. But it is not a “bad apple” issue. The whole barrel is rotten, and it is causing even the good apples to rot.

That being said, I do believe wholeheartedly that the overwhelming majority of cops are good men and women trying to do a tough job. But within a flawed system, we are sending them out to do things they are not trained to do and to implement practices that we know are going to have a racial disparity. And then we are all going to have terrible outcomes.

How should police departments operate differently?

Most departments still operate like we did in the ’30s, ’40s, and ’50s. We are using the same programs. We are fighting crime the same way, and it is resulting in disparate outcomes.

The concept of defunding must be about the reallocation of services to where they are most needed. It should not be a punitive measure to punish the police by taking funds. If communities are considering reorienting funding and do not approach it in a strategic way, even if they were to take $100 million from the police department’s budget and give to community services, it may take years for that system to absorb those funds, provide services, and get the kind of return on the investment necessary to reduce the law enforcement footprint.

A community-led public safety strategy should center around those who work most closely with the social issues that lead to criminal justice system involvement — poverty, unequal access to health care, and the like, as well as those community groups that help prevent crime, such as those working on focused violence deterrence. But many grassroots organizations may not have sufficient capacity immediately, even if we start reallocating. We are going to have to make investments in communities beyond just reallocation of funds to support the work these groups are doing on the street every day. When reallocating resources, we also need to be careful to invest in programs that work and that we are not creating new major nonprofits that undermine the efforts of people who have already been working deep in the community for years.

After a career in law enforcement, what is your view on defunding the police?

We have to be careful and make decisions according to a strategic plan on how to achieve reallocation, or targeted defunding, in a manner that does not compromise public safety. If we do this wrong and leave gaps and crime or violence goes up, not only will we not have reallocated the way we should, but we also will start refunding the police, and at higher rates, because fear will drive our actions.

Approximately 85 percent of police funding is for personnel — and if you just arbitrarily make big budget cuts in one swipe, many people will be laid off. But as a chief, I did not want the layoff process because, bottom line is, last one in is the first one out. Which means you just got rid of my diversity, my youth, and I am left with the rest of the department, who may be much more resistant to change.

How can communities actually promote the change they seek?

We can never forget that this is still a political process. That the decision-making process regarding funding is about convincing the elected officials of what to do.

The change must be collaborative. Everything has to be connected because when society reimagines public safety, it cannot do that in isolation because the system is going to fight back.

You say the system will fight back. Is there hope for change?

After 35 years in law enforcement as an officer, chief, and working for the federal government, I am more optimistic today than I have been in the past. The amount of change people want is not going away. This is not a moment — this is a movement. But I would say this, though — as we proceed forward, we should think about the Nelson Mandela phrase, “only the truth can put the past to rest.”

Everything has to start with people sitting down and acknowledging the truth — the truth of our history, the truth of the harm our systems have done, and the truth to understand why we need to make the changes that have to be done. Then we need to be bold, courageous, and competent. And this is going to be a work in progress. It is not going to be perfect, but we still need to do it anyway, because our communities demand it.

This interview was originally published by the Brennan Center for Justice.